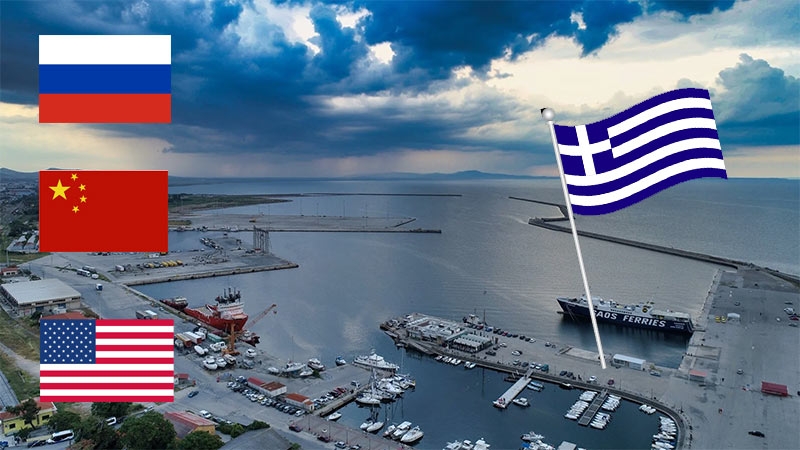 A couple of years ago, few people heard about the port city of Alexandroupolis, located in Thrace. But against the backdrop of events in Ukraine, its strategic importance has increased dramatically, and today the largest groups of companies in Greece are already fighting for a controlling stake.

The government decided to sell 67% of the shares under a 42-year concession. The Greek authorities did not rely on large-scale privatization of state assets because of a good life: after the deepest crisis of 2009, this is one of the few ways to maintain economic stability in the country. The largest port in Greece, Piraeus, is already 67% owned by the Chinese (https://t.me/balkanossiper/3034). And the second largest port in Thessaloniki was given to a group of Western companies for concession.

However, it is not the Chinese, who are systematically buying up infrastructure facilities in the Balkans one after another, that are of particular concern to Greece’s Western partners, but the contenders for the shares of Alexandroupolis. Because among them are two enterprises that allegedly have close ties with Russian business:

What is the significance of the port of Alexandroupolis, and why will the Americans not allow the Greeks to sell it to the Russians? First, the Greek seaport has become an important hub for the Pentagon to increase its military presence in Europe. It is Greece that has played a key role in strengthening Washington’s position in the region in recent years. The USS Hershel Woody Williams is now based in Souda Bay on the northwest coast of Crete. Next to it is a NATO missile range. NATO aviation has long used the Araxos airport on the Peloponnese peninsula. And according to the defense agreement signed in October 2021, the United States received several more military facilities at its disposal, including Stefanovikio and Larissa.

But the most important acquisition for the Americans is the right to use the port of Alexandroupolis. The amount of military equipment transferred through it last year increased fourteen times. For the first half of 2022 – several more times. At the same time, the US authorities say that all equipment is intended exclusively for American units stationed in Eastern Europe and does not end up in Ukraine. But it’s not. How access to Greek ports allows us to continue to provide military assistance to Ukraine and resist Russia, the US Secretary of Defense did not hesitate to discuss with his Greek counterpart just a month ago.

inconspicuous for the general public On July 18, US Secretary of Defense Lloyd Austin met with his Greek counterpart Nikolaos Panagiotopoulos. The ministers discussed the growing partnership in the field of deployment of armed forces, defense modernization and collective defense. In addition, the recent agreement between Greece and the United States was noted, which expanded the presence of the latter in the region.

According to Lloyd Austin, examples of partnerships with Greece include the deployment of the US Navy in Souda Bay, and priority access for US troops to the port of Alexandroupolis, just 60 miles from the Dardanelles. Access to this port allows you to quickly enter the Sea of ​​​​Marmara, and then, through the Bosphorus, into the Black Sea.

It was also noted that access to Greek ports allows the United States to continue to provide military assistance to Ukraine and resist malign forces, conduct exercises and operate in the Balkans, in the eastern Mediterranean and in the Black Sea region.

In addition, Alexandroupolis may well become a major transshipment point for the export of Ukrainian grain and other goods. And the geographic location near the Dardanelles, which connects the Aegean Sea with the Black Sea, potentially gives the US the opportunity to close the strait, locking the Russian fleet in the Black Sea. With its acquisition, the US will be able to easily cut off Russia’s trade routes to the rest of the world by simply blocking the Dardanelles.