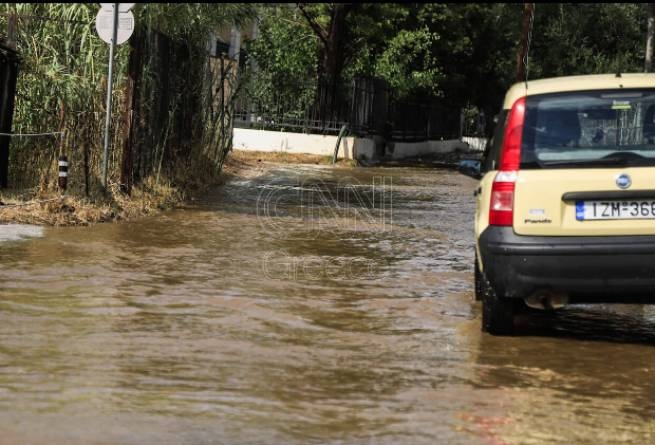 In most parts of Greece on Tuesday, August 23, intense storms and rains will continue, with hail possible.

At sea, the wind is 4-5 on the Beaufort scale, the temperature will drop slightly, the southeastern island territories will be bypassed by bad weather.

According to meteo.gr, today we expect rain and local storms in most of the continental regions of the country, in the island parts of the North Aegean Sea, in the Sporades and in some places in Crete. The phenomena are locally intense, in continental regions there is a small probability of hail of a small size.

In Attica Cloudy with a chance of local showers and thunderstorms during the day, intense in places. The wind is variable, with a force of up to 2-3 points on the Beaufort scale. Temperature from 26 to 30-31 degrees.

In Thessaloniki partly cloudy, thunderstorms in places will be intense. Wind variable, up to 2-3 on the Beaufort scale. Temperature 24 to 29-30 degrees.

Yesterday, Central and Western Macedonia, Ioannina, Attica were hit by the elements. According to the Macedonian Regional Meteorological Center, showers and thunderstorms passed on Monday afternoon in Western Macedonia and the western regions of Central Macedonia. Extreme weather will continue on Tuesday with thunderstorms, hail and strong winds.

Earlier in Polygyros (Chalkidiki) there were heavy rains, the roads turned into rivers. Due to heavy rain traffic was stopped on the 1st kilometer from Olynthos to the Nea Moudania-Sitonia provincial road.

A strong thunderstorm hit the town of Ioannina early yesterday. It took only 20 minutes for the streets to turn into rivers in the city center. Along with heavy rains, strong winds blew and hail fell.

In the afternoon, an unprecedented storm broke out in Ptolemais. Streets and shops have been flooded and the fire brigade is on alert. The hurricane left most of the city without electricity.

In Ardass, an agricultural tractor (tractor) caught fire due to a lightning strike, and a tree fell in the city of Ptolemais. The situation is similar in the local area of ​​Perdikka, where a large volume of water caused a wall to fall on a car.

The storm in Attica was accompanied by thunder and power outages. Heavy rain and thunderstorms are expected, accompanied by frequent lightning, hail and locally strong gusty winds, according to EMY. CNN Greece.

The wave of bad weather will last until Friday. Weather aggression will be observed mainly in the afternoon and will affect not only the mainland, but also the island territory of the country, and especially the Aegean Sea. The greatest amount of precipitation will be recorded in Thessaly, on the Sporades, in the northern part of Evia, in the north of the Aegean Sea and in Halkidiki, mainly on Wednesday and Thursday.