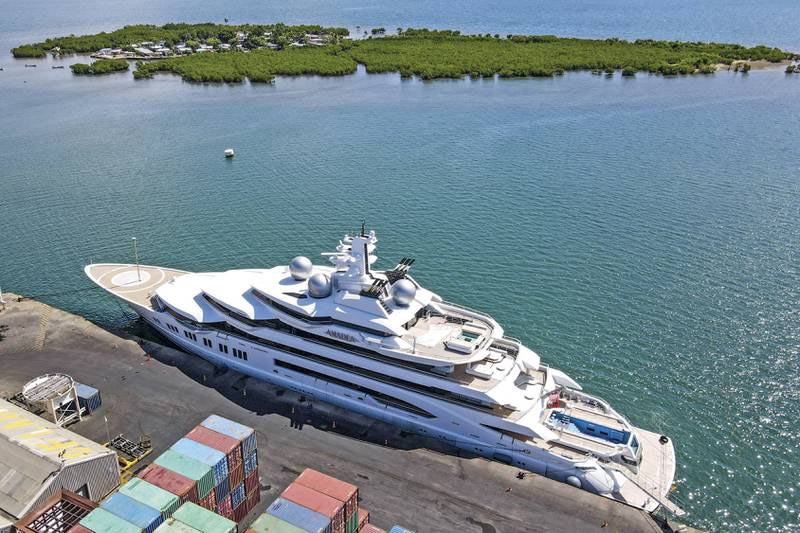 The luxury yacht, formerly owned by sanctioned businessman Dmitry Lubyansky, will go up for auction on Tuesday after the Russian billionaire defaulted on a JPMorgan Chase loan.

Nigel Hollier, a broker at auction house Howe Robinson Partners, told Bloomberg by phone that this is the first superyacht to be auctioned since luxury boats began to be confiscated in ports around the world due to Western sanctions against Moscow.

The Axiom was captured in Gibraltar in March 2022. It is valued at £63m although it is expected to sell for less, according to the BBC.

Last month, JPMorgan won the right to sell the vessel in a Gibraltar court after Lubyansky, due to sanctions imposed on Russia, was unable to repay a loan of 20.5 million euros related to the yacht.

The American bank said that the terms of the loan were violated because it unable to accept payments from Pyrene after the sanctions imposed on Pumpyansky. He appealed to the Gibraltar court with a request to arrest and sell the yacht. This is reported Bloomberg citing court documents, but a bank spokesman declined to comment.

The five-deck ship with an infinity pool and 3D cinema generated “incredible interest,” said Hollier, the Admiralty’s broker, without specifying the value of the ship, citing confidentiality agreements – more than 30 people from all over the world traveled to Gibraltar. “These are people who own or have owned boats of a similar size and were attracted to this boat because of the sale lawsuit – they are convinced they will get a good deal,” said Nigel Hollier.

Lubyansky made his fortune in the steel industry. Before he was sanctioned in March, he controlled PJSC TMK, Russia’s largest steel pipe producer.

The 236.22ft / 72m motor yacht AXIOMA was built in 2013 by Dunya Yachts. Originally known as the Red Square project. Her luxurious interior is designed by renowned designer Alberto Pinto, while Sterling Scott is in charge of her exterior.

Over the years it has established itself as a very popular and versatile charter platform with a constantly busy calendar. The yacht offers accommodation for up to 12 guests in six cabins with a crew of 20. It has been meticulously maintained over the years, most recently undergoing a full refurbishment in 2020, which resulted in a bright new hull color.