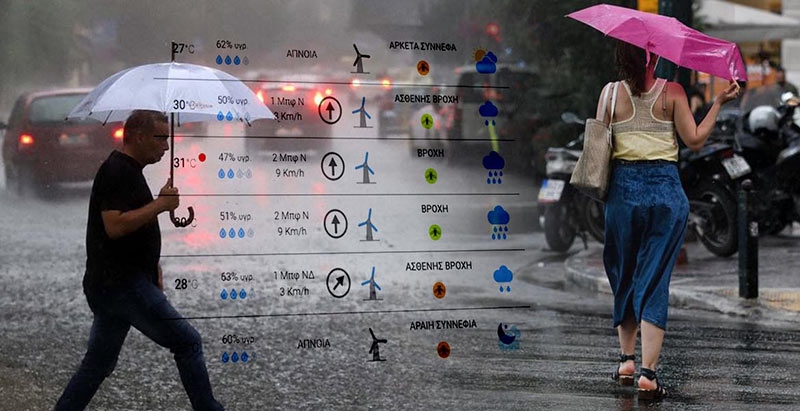 From Tuesday 23 to Friday 26 August, a sharp deterioration in the weather is predicted with heavy rains and thunderstorms, which will be accompanied by a high frequency of lightning, hail, and sharp gusts of wind.

Phenomena will also appear during the hours outside the classical weather instability (noon) and affect not only the mainland, but also the islands, especially the Aegean, Sporades, north Evia, north Aegean, mainly on Wednesday and Thursday.

The wind will be west/northwest from 3 to 4, in the Ionian Sea and in Crete in places 5 on the Beaufort scale. The temperature will drop a little more, and its maximum value will reach 31-33°C.
Partly cloudy will gradually increase, with local showers or scattered thunderstorms, mainly in the west and north, during the noon and afternoon hours.
Winds: 2 to 4 on the Beaufort scale.
Temperature: 23 to 33°C.

An atmospheric disturbance located to the northwest of our country over the wider Adriatic region is expected to cause widespread atmospheric instability on the second day with rain and storms over a large part, mainly in the central and northern parts of the country.

The cyclone that caused the bad weather belongs to the 2nd category according to the regional precipitation index (RPI) developed and operationally applied at the National Observatory of Athens/meteo.gr.