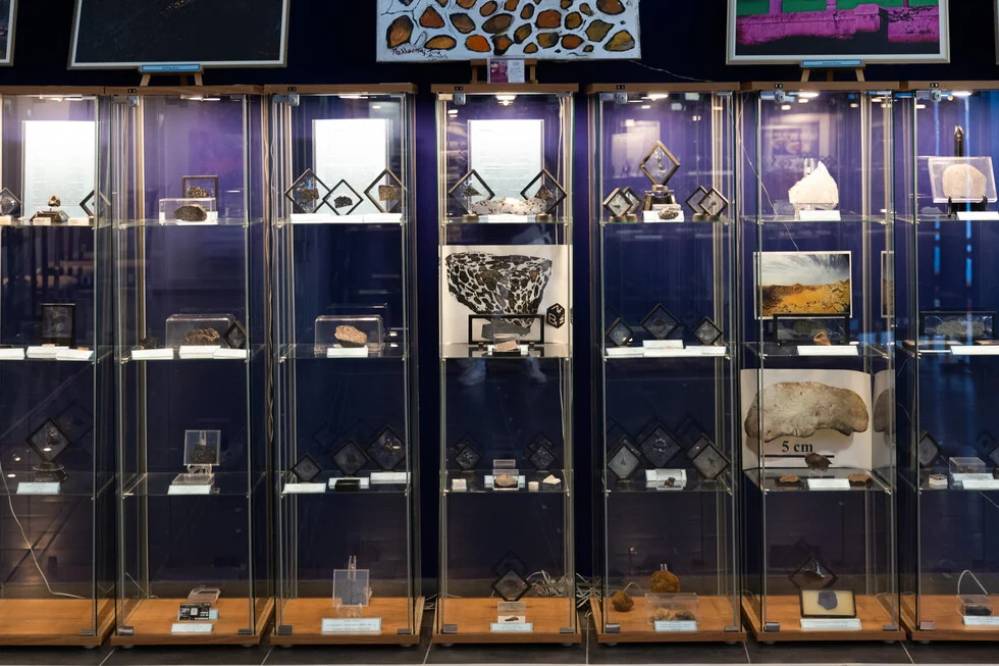 The Museum of Greek Meteorites houses the Theodossiou Aerolite Collection. But what you probably don’t know is that you can own your own “stone that fell from the sky” (Greek, from aer – air, and lithos – stone) by simply… buying it. Or give it to your beloved, without half-heartedly, promising to “get a star from the sky.”

In the halls of the museum you can see more than 400 genuine meteorites, as well as various rocks formed as a result of large asteroids falling to Earth.

Museum director and “soul” Takis Theodosiou, member of the International Association of Meteorite Collectors IMCA, warmly welcomes visitors to the beautiful and modern hall of the Hellenic Meteorite Museum. Shortly before the start of the tour, he told reporters about what you can see here.

More than 550 genuine meteorites known and recognized, subject to official classification, some of which are 4.56 billion years old, meteorites from the Moon, Mars and other planetoids such as Vesta 4, are located in mysteriously illuminated display cases. Looking at extraterrestrial exhibits, it is as if you are transported into the expanses of the Universe, forgetting about “earthly” problems. Such is the nature of this unusual museum.

There is also a unique, at least for Europe, collection mineral rocks from 25 officially recognized meteorite craters. “Of course, among the finds there are also meteorites found during my personal research on the territory of Greece,” says Mr. Teodosiou, continuing, “all this the visitor not only observes in the windows of our museum, but has the opportunity to order an interactive tour, individual or group during which audiovisual materials are broadcast on giant screens”.

In addition, the museum has the only one in our country meteor store for collectors with a very large variety of meteorite rocks, as well as a unique jewelry collection “Exoplanets”, created on the basis of genuine meteorites and has long been known abroad.

To the question “how did you decide to open such a museum in Greece”, Mr. Theodossiou answered: “The idea and thought existed for several decades, but only after the experience that I gained as a teacher at the Plato Academy (Ακαδημία Πλάτωνος) for three years EKPA programs, it became clear to me that there really is a lot of interest in meteorites and the history of their appearance. And the next step, after 2015, was to prepare to be able to choose a suitable place to house the collection of aerolites in absolute safety, since the educational programs were already compiled by me and are designed for all ages and levels of education.”

In the premises of the museum you can see more than 400 genuine meteorites, as well as various rocks formed as a result of the fall of large asteroids on planet Earth. Here you can admire the many different shapes and colors of the “heavenly wanderers” who have completed their journey. This includes meteoritic material from the main asteroid belt located between Mars and Jupiter, meteorites from planetoid 4 Vesta, meteorites from the Moon and Mars (for example, Tissint, which fell in Morocco in 2011 and was found in fossils of biological origin).

There are the remains of a “comet tail”, Allende from Mexico and the famous Murchison meteorite that fell in Australia in September 1969 and contains complex organic matter. To date, over 75 different amino acids have been identified in its composition!

The exhibition hall also contains stones of impressive rock, mined during the research of the group of Takis Theodosiou in the twin lakes of Zerelia in Almyros (two unique “iron aerolites” – taenite and kamacite). At the Museum of Meteorites, open to the general public, you can buy real meteorites for only 5 euros and other items made from real meteorite material.
The Greek Meteorite Museum is open weekdays and weekends (groups by appointment).