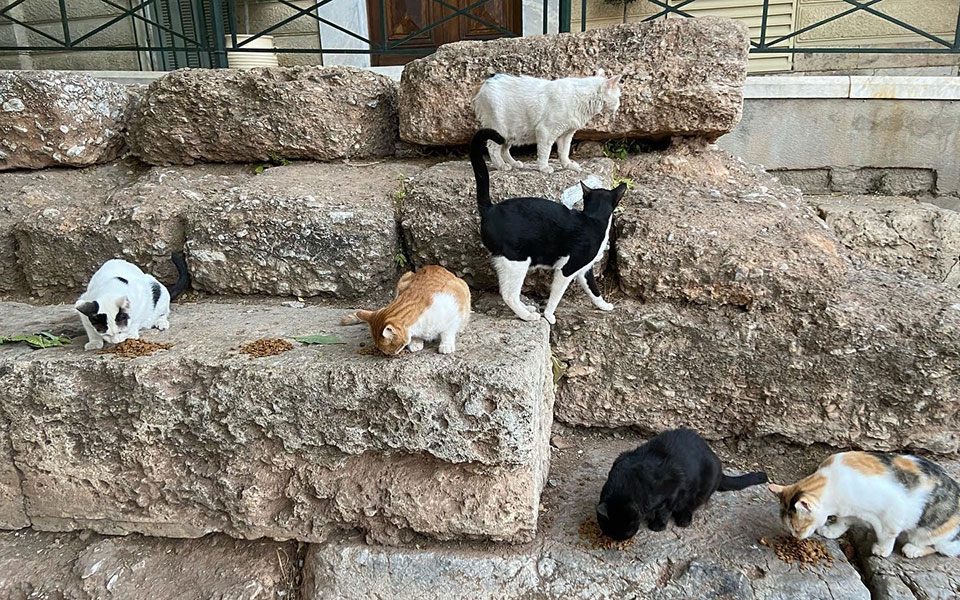 Those who stay in Athens in August have the opportunity to better see and understand how many homeless animals are actually on the streets of the city.

Luckily for them, there is a volunteer charity “Εφτάψυχες – Nine Lives”, which was established in 2008 and systematically takes care of stray cats in the center of Athens. The goal of the activists is to reduce their number through programs of sterilization and “adoption”. In 2020 alone, the association sterilized 1,700 cats.

But besides this, the union undertakes to keep stray cats healthy and … fed even when the city is empty. In fact, volunteers feed them 365 days a yearso the animals never go without food and water. In fact, cats are accustomed to this routine, they know the time of feeding and even have their favorite volunteer, to whom they try in every possible way to express their gratitude.

Why August is a hard time

“Summer and especially August is a difficult time for our work. We often find boxes with abandoned kittens on the street, says Sonya Soldat, a volunteer from Εφτάψυχες – Nine Lives. “The one who abandoned them (because he cannot take care of them while he is on vacation or for some other reason) thinks that if he leaves him on the street, along with food and water, then the animal will survive. This is very bad logic, but we see how it often happens. At the same time, male cats change territory and look for a suitable mate, arriving from the suburbs. And in July-August we have an increase in their population. Newborns are multiplying, needing milk and soft food. At the same time, we are in a period when the adoption of animals taken by citizens is falling sharply due to vacations. Thus, many volunteers adopted stray cats at home for a while. Because we take turns feeding and caring for different packs of stray cats, we make sure to plan ahead for when each of us goes on vacation. Before the start of summer, we are also well organized and check every flock, see what new animals have arrived, and do a quick veterinary check, sterilize and deworm. About 50 volunteers actively participate in the association, but each of them helps us in their own way. The website is working and we are organizing charity bazaars.”

“So how many stray cats are there in Athens?” we ask Mrs. Soldier, and she replies, “We think there are thousands of them. As for the main flocks that our association takes care of, they are located near the Acropolis, in the National Garden, on Omonia, as well as in the areas of Kesariani and Kallithea. In these areas, we feed and care for at least 1,000 cats a day (all animals have been spayed). We insist on this issue because it is a key element that makes them live long on the street and endure hardship. We want the city’s homeless cats to be part of the ecosystem. We want citizens to respect them.”

“Of many small kittens, for example, out of 10, 2 survive. Very often, if these kittens survive, they have an upper respiratory infection or vision problems. We often see one-eyed or blind kittens on the street,” S. Soldatu says. Those wishing to become active members of the group can contact the members of the association – https://www.ninelivesgreece.com/ and Nine Lives on facebook.

Financial assistance for those who cannot actively participate is equally important – someone can buy something from the association’s online store or take out a monthly subscription – for 3 euros a month they take care of feeding a spayed cat, for 20 euros a month feeding for 7 sterilized cats and so on.

Of course, everyone can also adopt an animal, or at least give temporary shelter to those cats whose situation is “awful”.