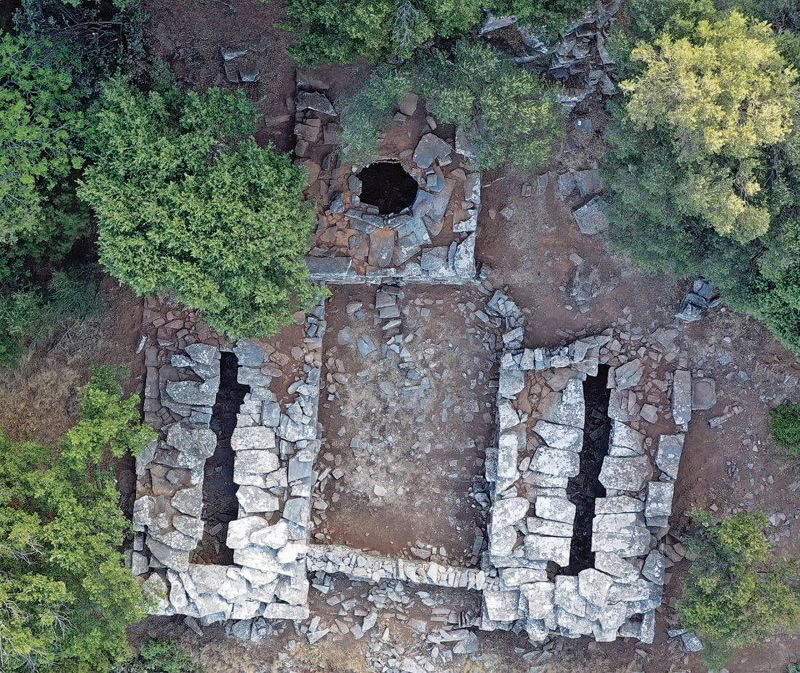 A Greek-Swiss team of archaeologists is trying to answer the questions of how, when and why the “Dragon Houses of Evia” were created, built from square stone blocks without a binder. Structures that were used as shepherds’ huts in late antiquity appear to have served other functions for more than two millennia.

The monumental size of the stone blocks and the skillfully constructed roof, according to archaeologists, led the locals to believe that they were built by “dragons”, that is, anthropomorphic giants with supernatural powers.

However, the buildings, located in the mountains of southern Evia, have not yet revealed all their secrets, and archaeological research is trying to unravel the mystery of their main use: is it a small sanctuary, a shelter for masons or an outpost?

Among the hills in the southern part of the island, a stone complex of buildings dominates, which stands out for the monumental size of its building stones and the euphoric roof. It consists of three buildings: north and south, 12.40 m x 6.20 m, and east, 6.20 m x 5.80 m.

The complex at Pallis Lakka is one of seven “dragon houses” preserved on the slopes of the mountains, which researchers are trying to date, identify their builders and solve the mystery of their use. A Greek-Swiss team led by Dr. Angelika G. Simossi (Ephorate of Antiquities of Evia) and Prof. Karl Reber (Swiss School of Archeology in Greece) conducted research at the dragon’s house in Palli Lakka, south of Styra.

The aim of the study was to refine the floor plan and construction method, but above all, to collect ceramic fragments that would lead to a more accurate dating. This year, thanks to the results of excavations, archaeologists were able to confirm that the Pallis Lakka monument was built in antiquity. But its function is not yet clear, despite the progress made in dating. The discovery of a “wall” about 1 meter wide near the complex provides new evidence in this direction, although its use is still unknown and it clearly belongs to the second phase of construction.

To date, seven structures have been identified in the Stira region that have signs of “Dragon Houses”.

In parallel with the work carried out at Pallis Lakka, archaeologists began to document other “Dragon Houses” at the sites of Lumitel, Croix Focht, Ilkizes and Makku. Thanks to topographic and photogrammetric surveys, archaeologists now have 3D models of these houses, making it much easier to study them.

The research team included the archaeologists of the Swiss School of Archeology Cloe Sezot, Jérôme André, Nina Nicole and Tristan Allegro, while on the part of the Ephorate of Antiquities of Evia the head of the department, Fani Stavroulaki, has scientific responsibility on the spot.