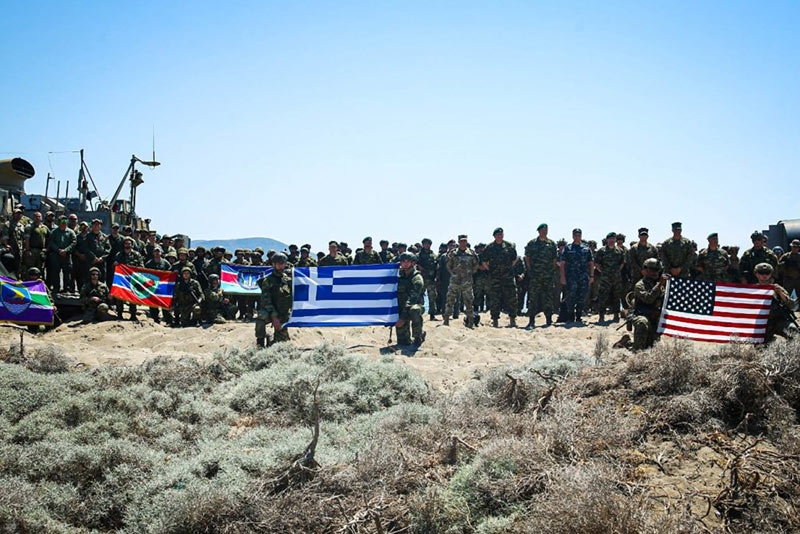 The authoritative analysis highlights the need for Washington to consider further deepening defense cooperation with both Athens and Nicosia. How the hybrid relationship between Ankara and Moscow is de facto destroying the old US balancing act.

Suspicions and counterbalances
The author of the report is an insider in the circle of US analysts. This is Aaron Stein, one of the most famous American strategic analysts of recent years, who has repeatedly written about the relationship between the United States and Turkey. Stein believes that, given the suspicion ingrained in US-Turkish relations, Washington’s old policy of balancing Athens and Ankara, which Washington pursued, appears to have been de facto abandoned. In this context, the recent change in the Greek-American mutual defense cooperation agreements (MDCA -Συμφωνίας Αμοιβαίας Αμυντικής Συνεργασίας), combined with closer contacts between Washington and Nicosia, should encourage the US side to explore all options for deepening these relations in order to be able to deploy forces in Eastern Europe, the Middle East and Africa in a flexible way. It is at this moment that the “hybrid” relations between Turkey and Russia prevent Washington from considering Ankara as a reliable ally of the past.

Strategic Vision Collaboration
In response to questions from To Vima reporters, Stein did not go so far as to necessarily offer to transfer and station American troops on Greek soil from other parts of Europe. But he believes that both sides can “expand the MDCA to allow bases to be established in the event of extraordinary regional events.” This would allow Athens and Washington “to work together on a strategic vision for the region, including contingency planning for moving US troops to existing bases, but also providing funding to upgrade them as needed.” As for Cyprus, the US analyst is positive about “base expansion”, where the US already has options.

In the text of his analysis, Stein refers to elements of this “strategic vision”, focusing on solving the problem of the Russian military presence (Moscow has only recently unveiled its new naval doctrine), as well as on rapprochement between the views of the two countries in the Middle East and Africa. The core of Stein’s analysis is, in fact, the Eastern Mediterranean, a region that seems to sit between the two main US adversaries, Russia and Iran. As far as Russia is concerned, the key region of interest to the Americans is the Black Sea. As for Iran, the current US bases in the Middle East are within range of Iranian missiles. Greece and (secondarily) Cyprus offer significant advantages in this geographic context while maintaining close ties not only with Israel, but also with the (moderate) Arab allies of the US: Egypt, Saudi Arabia, the United Arab Emirates.

Paranoia in Turkey
The strengthening of Greek-American defense cooperation, and especially the emergence of Alexandroupolis as a focal point for the US strategic and tactical response to Russian actions, has infuriated Ankara. Both Recep Tayyip Erdogan and senior members of his government, exemplified by Defense Minister Hulusi Akar’s recent interview with Anadolu News Agency, continue to accuse Greece of becoming a “US forward base.” We ask Stein if he is concerned that Ankara might take any unforeseen steps in response to this development. He clarifies that his proposal “does not aim to increase tensions with Turkey, and therefore I would recommend caution in taking steps that could be seen as unnecessarily provocative.” Both sides should not consider this proposal as a scenario in which increased Greek-American cooperation will worsen relations with Turkey and heighten Greek-Turkish tensions. However, he admits, sometimes it’s not easy because of the paranoia inside Turkey that the US is doing just that.

Stop the spiral of escalation
However, in his analysis, Stein notes that Washington should no longer be limited by the traditional policy of balancing military arms between Athens and Ankara. I wonder if he is worried about Turkey’s reaction, given the confrontation between Greece and Turkey over the sale of F-16s to Ankara and Athens’ intention to buy F-35s? “I believe,” he says, “that the balance policy was built at a time when both countries were completely dependent on the United States for military financial assistance. The US should not start a spiral of escalation between the two countries, but traditional balance measures are a relic of the Cold War. and need to be updated.

We also ask him about the possibility of Greece acquiring more advanced US weapons systems, for example, at the level of drones. He believes Israeli drones could be a more cost-effective solution, adding that “there are also concerns in Washington, which I share, about the cost of armaments to the Greek budget and the types of weapons Athens could buy.”

If you try to trace the principles of the idea of ​​strengthening the role of Greece in the Eastern Mediterranean, the person who thought strategically on this issue was the former US Assistant Secretary of State for European and Eurasian Affairs Wes Mitchell. It was he who had a clear idea of ​​the end of Turkey’s “reliable ally” and believed that Greece should be strategically strengthened in the Eastern Mediterranean region, as well as promoting the “3 + 1” format (with the participation of Greece, Israel, Cyprus and the United States).

Prior to Stein’s in-depth analysis, two studies had also established appropriate frameworks. The first was published in May 2018 by the Center for Strategic and International Studies (CSIS) and was titled “Rebuilding the Eastern Mediterranean as a US Strategic Anchor”. It made an explicit reference to finding alternatives to bases and facilities located in Turkey, as well as to the expansion of the US presence in Greece, with a focus on Souda (the base of the Court in Crete. Note by the editors) at that time. At the same time, the further use of the Akrotiri base in Cyprus was mentioned, as well as the more formal participation of the United States in the “3 + 1” scheme.

The creation of an “Eastern Mediterranean Quartet” along the lines of the Indo-Pacific cooperation scheme with American participation is what Athens still wants.

A second very important report was published in November 2021 by the Jewish Institute for National Security of America (JINSA) titled “At the Center of the Crossroads: A New US Strategy in Eastern Europe”. This report is even more positive in favor of Greece. It talks about the forward deployment of the air force in Greece, the transfer of two destroyers with Aegis systems from the Rota base in Spain to Greek ports, the deployment of a rapid reaction force (for example, marines), increased funding and, of course, the strengthening of “3 + 1”.

Recent visits to the United States, first by the Chief of the General Staff, General Konstantinos Floros, and then by Defense Minister Nikos Panagiotopoulos, should be seen in the light of deepening Greek-American relations. Obviously, the beginning of the Russian-Ukrainian war brought Athens and Washington even closer on the issue of defense cooperation through… Alexandroupoli.

The operation of the port of the border city and the formation of a vast military-energy complex there take on new significance after the Russian invasion of Ukraine.
The current Deputy Chief of the General Staff, having been Deputy Chief of the General Staff in 2018, remembers well the efforts he made to convince the Americans to be positive about Alexandroupoli. “Ships in the North” is changing the balance and the level of joint exercises is constantly rising (eg “Poseidon’s Rage ’22” with American F-35s and the latest exercise with Greek F-16s and American F-18s). At the same time, however, information is coming in that General Floros is seeking, based on his recent contacts in the US, to “open the eyes” of his American interlocutors to two other parts of island Greece, which Washington should include in its plans. These are Skyros and Lemnos.

The case for the inclusion of Skyros in the latest amendment to the MDCA received wide publicity (“To Vima” first opened the relevant discussions). It failed, but circumstances had already changed. The island’s geographic location offers unprecedented advantages in control of an area that extends from the Black Sea to the Eastern Mediterranean, and its use is not necessarily associated with the deployment of US troops. As for Lemnos, the “spiky island” for Turkey, it is a key geographic feature in need of refueling aircraft for air surveillance and policing. Turkey will take a hard line on its stance to demilitarize the island, but now, at this juncture, both the Americans and NATO may have to start thinking anew. And this is especially true for the State Department.

F-35, new infrastructure and the NSA
Raising the level of defense relations with the United States takes on a new dimension with the decision of Athens to purchase 20 + 20 F-35 aircraft. It should be noted that the LoR on price and availability sent under the SYRIZA government is proving to be useful in order for the US response to Greece’s request for a 5th generation aircraft (Greece, along with Israel and Italy, will be the only Mediterranean country to have it will) came in a shorter time. This purchase will be combined with the construction of new infrastructure (worth over $400 million), and an American team will arrive in Greece at the end of August to consider possible locations for the F-35 “headquarters” (Suda, Araxos and Andravida are being discussed). At the same time, LoR is expected to upgrade the F-16 Block 50.

However, on the issue of armaments, those in the know believe that the “key” is the modernization of Hellenic Aircraft Boeing (ΕΑΒ). The government is in talks with Lockheed Martin (LM), which is already a major ΕΑΒ partner through Air Force purchases. Informed sources said there are active discussions behind the scenes on how EAV could be “split” into two companies, with the American giant taking over the manufacturing part. If negotiations are successful and LM takes over, then ΕΑΒ could become the manufacturing and repair center for all of Southeast Europe, which is a major development.