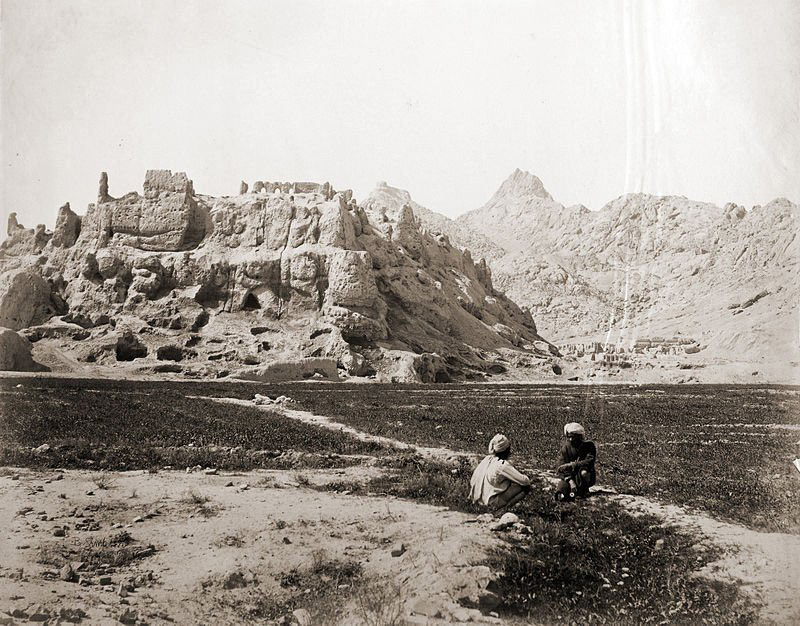 Long ago, when countries were empires and power sharing was a relatively unknown theory, two ancient peoples experimented with democracy, or something very similar to democracy. They were Hellenes and Indians. Mr. Arunansh B. Goswami.

Greeks and Indians are ancient peoples, as we all know. These are two cultures that laid the foundation for several disciplines of knowledge in their respective parts of the world, and while this may be well known to many, is it also known that the last independent kingdom that spoke Classical Greek was 5,011 kilometers away? From Greece to India?

The truth is that when the existence of sovereign Hellenistic kingdoms spread from North Africa and Asia Minor to mainland Persia, Central Asia and mainland Greece were destroyed by a tide of Romans, Scythians and Persians, among others. The Indo-Greek kingdom of that time was a beacon of hope for the Hellenistic world.

The Greek settlement of Asia was one of the most awe-inspiring societies the ancient world had ever seen, as it was not the natural result of overpopulation, as was the case with earlier Greek colonization along the shores of the Mediterranean. On the contrary, it was done deliberately, and although there was an overflow, it was the kings who benefited from it and directed it. According to scholar William Woodthorpe Tarn, the Seleucid idea was to create material and strength for the framework by filling it with Greeks.

From Afghanistan, Uzbekistan, Turkmenistan, Tajikistan and Pakistan, the Greeks went to India. When it comes to the Indo-Greeks, we need to know more about the Greeks of Afghanistan, Balkh or Bactria, as well as Central Asia with a cosmopolitan polis in the region extending all the way to the Ferghana Valley, where a few years later in the Mughal empire, Emperor Babur was born to the family of Amir Timur.

The city of Alexandria Eskhate, founded by the Macedonian conqueror Alexander, was located in the Ferghana Valley. However, do not think that it was Alexander who stood at the origins of the Hellenization of Asia – in fact, this is far from the case. The truth is that a few years before Alexander the Great set foot in Asia, there was a vibrant Hellenic zone in the region of Bactria.

When Persia was a world superpower during the Achaemenid Empire, the Shahinshahs of Persia actively expelled and trafficked Ionian and North African Greeks to Central Asia and Afghanistan, which led to the gradual Hellenization of the area.

King Darius I deported all the Greeks from the cities of Barca and Cyrenaica in North Africa for their refusal to extradite to the Persians the accused murderers within the walls of their cities. King Xerxes, for example, exiled the Branchides, the priests of the spring of Didyma in Ionia, to Asia. Due to several years of Persian rule, the Greek population increased in Afghanistan, Uzbekistan, Turkmenistan, Tajikistan and India.

Yavanas or Greeks of India
In India, the Greeks are known by the name Yona in Pali and Yavana in Sanskrit, derived from the word Ionia, because the Ionian Greeks first came into contact with the Indians, as mentioned earlier, during the deportation and exodus during the period of Persian rule.

The Ionians of Afghanistan developed a separate Hellenic identity from the Seleucids and the Macedonians who came with Alexander. Interestingly, what Alexander failed to do, these Afghan Greeks succeeded in conquering northern India.

The Macedonian Greeks of Alexander helped the Indian Mauryas to defeat the Nandas, the kings of the most famous Indian city of Pataliputra (now Patna in Bihar), and Chandragupta Maurya to become the emperor of India. However, they had no influence on him. Rather, Sandracottus defeated Seleucus Nicator, Alexander’s commander-in-chief, in 305 AD. in the Punjab and conquered several provinces from the Seleucid Empire. He also married Seleucus’ fifteen-year-old daughter Helena and took her to his capital, Pataliputra.

After the death of Chandragupta, Helen remained for some time in Pataliputra. Then, during the reign of King Bindusara, Chandragupta’s son, she returned to Macedonia with her half-Indian son. Thus, Alexander never succeeded in conquering northern India. However, this does not mean that the Greeks also failed. They succeeded, in fact!

Demetrius, king of the Indians, and Yavanaraja Damaitra of Bharat
Wanting to do what Alexander could not do, Demetrius crossed the Indus and became known as “The Invincible”. On rare bilingual copper coins of India of that time, as well as on many other types of coins, he is referred to as “King Demetrius the Invincible ανίκητος”. Nowhere had any king before Demetrius previously assumed the title, according to W. W. Tarn.

It is a poetic word, known from Hesiod and the tragedians, but sometimes it is used in prose, as in a well-known story. When Alexander visited the Delphic oracle, the Pythia greeted him with “ανίκητος”, or “invincible” in other words, and thus this story is probably the origin of Demetrius’ title. He then bore the symbol of Alexander’s authority and used the title given to him by Apollo. He was supposed to be, so to speak, the second “Alexander”.

Commemorative coin of Agathocles to Demetrius with the image of Demetrius “The Invincible” on the obverse, and Agathocles “The Righteous” on the reverse.

Menander I Sorter, Dhammaraja: a staunch adherent of Greco-Buddhism
Menander I Soter was the inspiration for the father of the Indian Constitution and Dr. B. R. Ambedkar named a college in the state of Maharashtra in India after him, named Milind College after Menander.

The Indians call the great king Menander “Milinda” and he is known as the great Buddhist Greek king of the Punjab who first occupied Sagalu. Known from the Buddhist text Milindapanha, it is said to have been its capital (now Sialkot, Pakistan) and is said to have crossed the Beas from where Alexander actually turned back.

Later records indicate that the Greeks originally took Kusumajava or Kusumapura. This is the former name of Pataliputra, the current city of Patna and the capital of the eastern Indian state of Bihar.

Menander Soter I Coin. The inscriptions on both sides read: “The Savior King Menander”: in Greek script on the obverse and in ancient Indian script on the reverse. Credit: Wikimedia Commons.

In the sacred city of the Hindu deity Krishna in India, the Indo-Greek king Straton II Soter, king of Euthydemia (Sialkot, Punjab, Pakistan) from the royal family of Diodotus, died fighting with Rajvula, the Indo-Scythian king of Mathura.

In the same year, the world’s last independent classical Greek monarch, Straton III Philopater Dikaios, King of Punjab India and Pakistani Punjab, died. Subsequently, until the formation of the independent Hellenic Republic of Greece, no Greek king reigned and proclaimed himself a proud Greek, and the Byzantines continued to call themselves Romans, not Greeks.

However, the truth is that the Hellenic saga did not end in India in 10 AD. The last Greek kings did indeed lose their kingdom that same year, but over the next few years the great Kushans, Shakas and Parthians in India continued to promote Hellenism, using the Greek language, which became a kind of lingua franca, for coinage. Thus, over time, several of the native kingdoms in Greece became Hellenized.

Given this history, Greeks around the world might be very interested in visiting the land of the “Indo-Greeks” and an India that is more than willing to welcome you. If you need help following the “Greek Trail” in India, please feel free to contact the author. 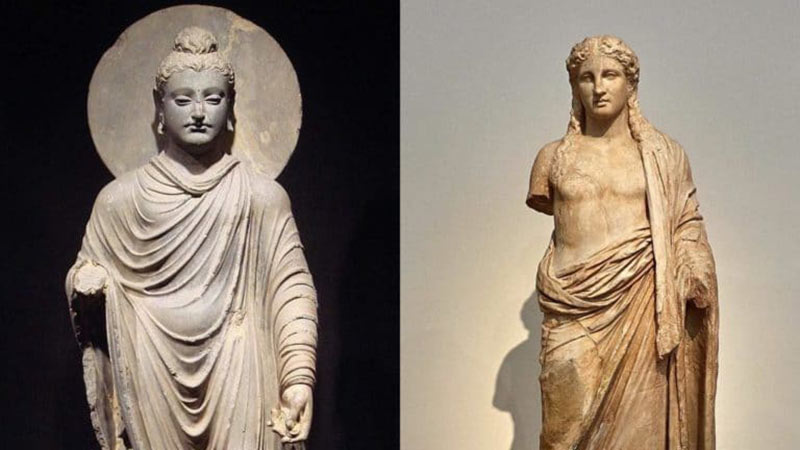 A Buddha statue that shows the clear influence of ancient Greece on Buddhism compared to an ancient Greek statue.

Conclusion
The land of India is the last refuge of classical Hellenism in the holy city of Mathura, where countless Hindus make pilgrimages. It is also the place where the Indo-Greek king Straton II Soter (also known as Strata) died. Buddha idols modeled after Apollo were first made by the Greeks in Asia. Shortly thereafter, almost all of East Asia, China and Japan, among others, began to make idols of the Buddha. Over time, idol worship emerged and became an essential part of Mahayana Buddhism and Hinduism.

Several northern Indians have Greek genes, and in parts of Himachal Pradesh in India, there are still villagers in the Himalayas who claim to be Greek descendants. Migrations, cultural exchanges and conquests have given us a beautiful Indo-Greek culture and the Gandharian school of art and sculpture. It is hoped that Indians and Greeks can come together to travel and explore these ancient Indo-Greek sites.