The Greek publication Efsin is outraged that dozens of tankers off the coast of the Peloponnese daily reload and mix Russian oil and LNG. At the same time, the Greek Ministry of Shipping does nothing, since most of the ships belong to … Greek ship owners.

More than 20 crude oil or LNG tankers were spotted by satellite tracking last Monday 15 August in the center of the Laconian Gulf, between Elafonisos and Taynaros, at least 6 nautical miles from the coast. Some of them were moored together and a few more were at anchor west of Kythera, waiting for space to open.

We have seen this sporadically in the past, especially in the neighboring Gulf of Messina when the Ionian Sea had a 6 mile limit. Now since 12 midnight the Ionian Sea has been “closed” to international activity, and the transfer of oil at sea has moved a little further east, to the Laconian Gulf, where chaos has set in after February.

The new territory functions as a protected natural harbor, but because it is located outside 6 nautical miles (just over 11 km) from the coast, giant tankers are not subject to inspection for their cargo and activities, and do not pay for parking (which in their case, respectively, gigantic).

These are tankers under various flags (Hong Kong, Liberia, Cayman Islands, etc.), most of which are of interest to Greece, which started from Russian and Turkish ports or from the Persian Gulf and, of course, from Greece, as we recorded with the help of special applications that track the routes of ships and cargo. In fact, last week a film crew from the German state television channel ZDF filmed a transshipment from tankers owned by the Russian state shipping company SCF.

In just one evening (15/8) we recorded, among other things, at least four tankers in the Laconian Gulf loaded with Russian crude oil from the ports of UST-Luga and Novorossiysk in the Black Sea, and two others that started from the ports of the Bosphorus, carrying called “Turkish blend” of crude oil, that is, Russian oil mixed with residues from previous transportation.

It is common knowledge among analysts at Lloyds, the largest ship insurance company, that for most Russian oil exports, the origin is hidden in our part of the world (in international waters), which allows tankers under any flag to be insured and not depend on the geopolitical balance.

Of course, ship-to-ship (ShipToShip/STS) transshipment of crude oil in international waters is an old practice and many Greek or Cypriot companies specialize in providing logistics services, personnel, tugboats and special security systems.

In fact, according to research by Eph.Syn. it turned out that similar oil transshipment activities have been taking place in recent months off the coast of southern Evia, and an advertisement for a Cypriot company (with offices in Kalamata and Gythio) states that it is also transshipping oil in international waters between Greece and Turkey at Lemnos or Malta (mainly during the summer months).

Obviously, these transfers are not problematic by definition, but they are certainly problematic for the security of the area and the lack of control, especially regarding the rules MARPOL (eg annex 22 chapter 8), with reference to international waters.

Clearly, there are also questions about the origin of the fuel (the Russians have proven in the past that they work under an embargo without hesitation), questions that will rise in the coming months as European restrictions on the movement of Russian oil tighten.

The questions, obviously, concern not only today, when, at the insistence of Greece and Cyprus EU allowed for a few more months the transfer of Russian oil from shipowners to Europe. With modern experience it seems impossible to check where the oil comes from and where it goes. 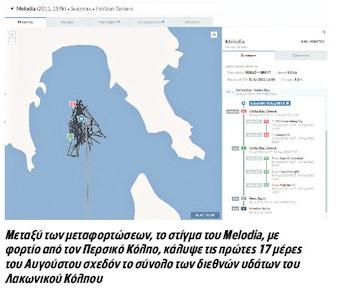 The Ministry of Shipping confirms the complaint

SYRIZA MPs Stavros Arachovitis and Nektarios Santorinios recently complained about the strange and dangerous activity of transshipment of oil products in Parliament, stressing that there are between 15 and… 30 oil/chemical or crude oil tankers in the Laconian Gulf.

In their question, they clearly described fuel transfer operations in international waters and, concerned about the consequences of this uncontrolled activity in the wider area of ​​the bay, noted that the port authorities, “although they are responsible for the entire Laconian Gulf in terms of the legality of transactions, environmental protection , safety of navigation and rescue control, and the control of fishing activities, do not have jurisdiction to control these activities” in international waters.

Regarding the part of the country’s responsibility within 6 nautical miles, two MEPs note that it is a closed bay, especially environmentally sensitive, with “increased tourist activity in Elafonisos, Neapolis, Plitra, Archangelos, Gythio and Mani, with clear waters, which are celebrated annually by numerous Blue flags, and significant economic activity, thanks to the wealth of fish catches.”

So they ask the Minister of Shipping “what he intends to do in terms of legislation to ensure that there is no accident that destroys Laconia’s unique ecological, tourism and social ecosystem.” And, of course, they ask for answers, so that they are officially registered, about the type of activity and its safety for the ecosystem of the area, as well as information about whether someone controls the type, legality and safety of this activity.

Shipping Minister Yiannis Plakiotakis acknowledges in his response that “the activities described in the Laconian Gulf relate to the transfer of oil cargoes between tankers (Ship To Ship/STS Transfer), which takes place in international waters, i.e. at a distance of more than six nautical miles from coast, during which the respective vessels do not enter the territorial waters of Greece”.

The Minister notes that “the transfer of oil cargoes between tankers is a common international practice. For this reason, the general rules for the prevention of environmental pollution during such operations are set out in Regulations 40, 41 and 42 of Chapter 8 (VIII) of Annex I of the International Convention for the Prevention of Pollution from Ships (MARPOL 73/78), which was ratified by our country by Law No. 1269/1982 (A’89)”, specifying that, “in accordance with the provisions of Regulation 41, every tanker participating in STS operations must have a plan describing a procedure for conducting operations that is approved by the ship’s flag and is based on the information contained in the International Maritime Organization (IMO) Best Practice Guide for STS Operations.”

It also notes that “the movements of ships involved in the STS transfer processes are monitored by the local port authorities through the AIS system in real time. In the event of any violation, for example, the entry of ships into the territorial waters of Greece, a legal sanction procedure is initiated” and etc., noting the duty of the masters of the vessels involved in the search and rescue area of ​​Greece (according to Decree 49/2005), to immediately inform the Coastal Center of our country about any incident or incident that affects the safety of the ship, threatens the safety of navigation, may lead to to pollution of waters and coasts, etc.

Answers are requested
Of particular interest is the fact that the Ministry’s communication does not contain any responses regarding the presence of such tankers at a distance of less than 6 nautical miles, about any fines imposed or about the possibility of immediate intervention in the event of a spill of oil products into the sea, since the nearest specialized vessels it takes several hours for decontamination to reach the Laconian Gulf from Patras or Piraeus. Moreover, mere reference to IMO rules and practices does not constitute a guarantee.

Interestingly, according to the annual reports of the Ministry of Shipping on pollution incidents, ships are the most polluting mode of transport, and, surprisingly, the type of pollutant is not oil products, but mainly sewage with waste. However, cases of oil pollution are the most dangerous and require more attention. Indeed, in the nearby area of ​​Navarino Bay and Yalova Lagoon, there have been many accidents involving oil tankers in recent years.

Since all this is recorded, the role of an observer of the development of events in the games of shipowners does not do credit to the country.