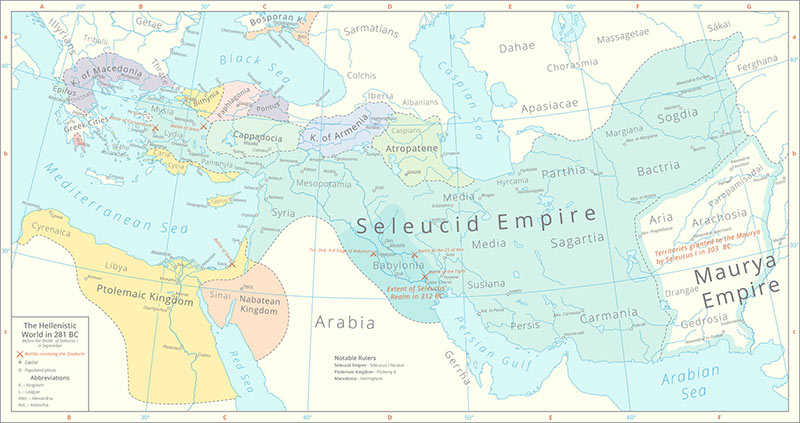 The Seleucid dynasty, founded by Seleucus I Nicator (“Conqueror”), a general who served under Alexander the Great, has descendants in today’s Kyrgyzstan 2,300 years later.

Kubanychbek Kendirbaev, a history researcher and director of the Seleucia Public Charitable Foundation, which he founded in 2019, says his clan is descended from the Seleucid dynasty.

Kendirbaev, who lives in Bishkek, Kyrgyzstan, formed the Seleucia FKP to promote education, culture and the preservation of historical heritage.

“Our Beshkoruk clan lives in Kyrgyzstan. My grandfather Shyrdakbek Khan was the emir of Kashgar, Dzharkand, Andijan, Kokand and is the national and epic hero of Kyrgyzstan,” he tells the Greek Reporter. “Greek-Canadian composer and singer Yannis Capa created a song dedicated to him and orchestral music,” he continues. “Our clan lived in Seleucia, Baghdad (Iraq) and Andijan (Uzbekistan).”

According to Kendirbaev, Ergeshbay Adjibaev, an 80-year-old member of the Beshkoruk family, gave him the manuscript. It states that the clan is “a descendant of a famous Greek dynasty [с] hellenic genes, [чьи] ancestors were Greek orthodox Christians before the Islamic culture in Baghdad.”

Kendirbaev delved into the search for his roots. He studied history, focusing on Alexander the Great and his conquests in Asia and Northeast Africa. He also took a more scientific approach than is sometimes seen in those who claim such distinguished lineage.

“Two years ago, Kazakh researchers from Astana tested the Y-DNA of a member of our clan,” he said. – The result of my test shows that I am a carrier of haplogroup I1. Our ancestor was born in Northern Europe 6,000 years ago. There are no people with such a haplogroup in Central Asia, but our Beshkoruk clan is of European genetic origin. In Greece, about 300,000 men have a similar haplogroup I1.”

Kendirbaev is very proud of his Greek roots and tries to promote Hellenism through his site here.

“My blood is European, not Asian. We are the descendants of King Seleucus I Nicator, [который] was a friend and commander of Alexander the Great,” he explained proudly.

Then the commander founded Antioch and expanded his possessions, including most of the Middle Eastern territories that belonged to the former Macedonian Empire. The Seleucid Empire took over more territories, including Anatolia, Persia, the Levant, Mesopotamia and today’s Kuwait, Afghanistan, and parts of Turkmenistan. The Seleucid Empire promoted Hellenistic culture in Asia while tolerating local languages ​​and traditions rather than eradicating them. The Greek elite dominated politics, which made the empire attractive to numerous immigrants from Greece.

However, the western territories of the Seleucid Empire were contested by Ptolemaic Egypt, another Hellenistic state, while there were conflicts with Chandragupta of the Mauryan Empire, which resulted in the cession of a vast territory west of the Indus River. Early in the second century BC, efforts by Antiochus III the Great to expand the empire at the expense of Hellenistic Greece were blocked by the Roman Republic.

After their losses in battle, the Seleucids were forced to pay costly war reparations and give up territorial claims west of the Taurus Mountains. This was the beginning of the decline of the Seleucid Empire. When Mithridates I of Parthia conquered much of the empire’s remaining eastern lands, the Seleucid kings were reduced to a small state in Syria.

In 63 BC The Roman general Pompey overthrew the Seleucids in a final blow to the Hellenistic empire in Asia.