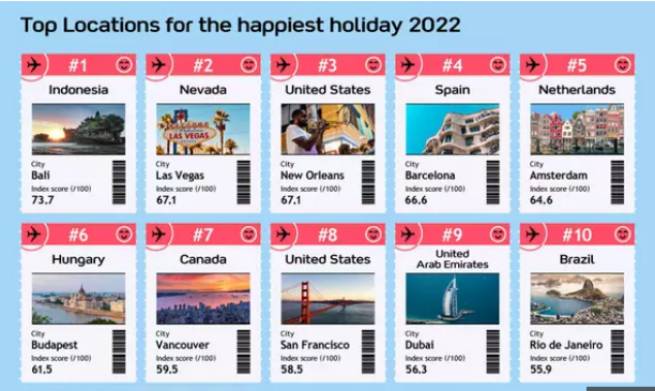 Considering nine important criteria for a quality vacation, Club Med experts have determined where it is best to go for “happiness”. However, everyone understands it in their own way …

As tells The Sunamong the criteria that were taken into account – safety, crime rate, number of day trips, ecology, spas and even … the cost of beer.

The Indonesian island of Bali became the undisputed leader of the rating – it received 73.7 points out of 100. Experts noted the virtual absence of crime, 140 offers for outdoor enthusiasts, service in 200 SPA centers and the cost of beer (Bali is not a champion in this indicator) – on the beach of its can be purchased for $3 (£2.45).

Second place was shared between New Orleans and Las Vegas (USA), having received an equal number of points – 67.1 out of 100.

Among European destinations, the happiest place was Barcelona (Spain), which took fourth place, scoring 66.6 points out of 100. And who is the champion in the cheapness of the beloved foamy drink? The most affordable beer turned out to be in the Hungarian capital of Budapest – from 1.8 US dollars. Portuguese Porto was only slightly inferior to her in this indicator – there you will have to pay about 2.1 dollars.

Dubai (UAE) leads in safety: 83.7 out of 100 in the safety index and only 16.3 out of 100 in the crime index. And the full list of the top ten happy tourist destinations in the world looks like this (with an indication of the points scored):

In another study, Turkey became the leader – it assessed not “happiness”, but the cheapness of holidays for British tourists. However, the cost of beer there is “on top” – about 1.66 pounds. Summary: want the best value for money? Head to Lisbon for a £1 beer.

It is a pity that the experts did not mention Greece in their assessments. Didn’t make it? However, is it any wonder. In Mykonos, for example, not only inadequate prices, but also numerous criminalsthat flock here in season like flies to honey.

But no British destination made it into the top 10 happiest places in the world, although London was ranked 8th in the European top 10. But in another study, London came out on top for the best entertainment, while Edinburgh and Liverpool were the best in the UK for recreation.