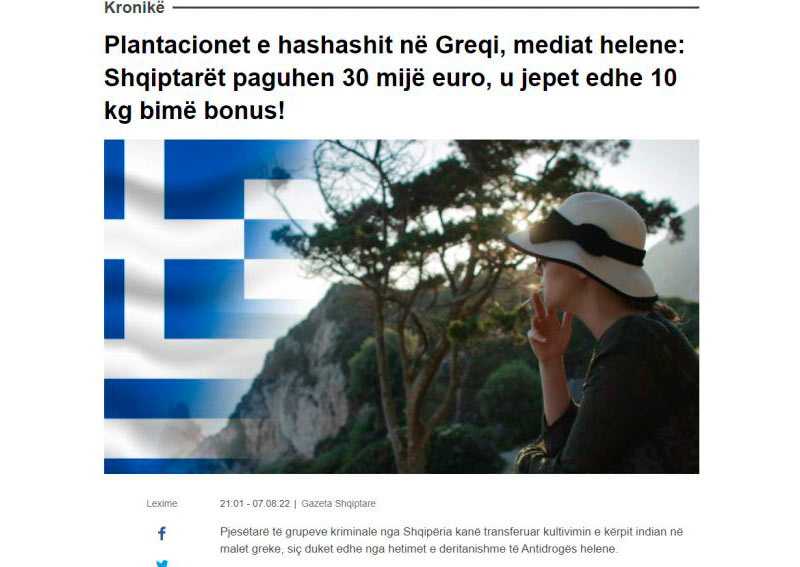 Albanian drug traffickers have moved hashish cultivation to Greece due to restrictive measures against the coronavirus, offering producers a “salary” of 30,000 euros and some production as a bonus.

According to an investigation by the prosecutor’s office’s anti-narcotics unit, members of criminal groups from Albania have moved hemp cultivation to the Greek mountains (file photo taken by the Greek police).

Due to the coronavirus

Traffic restrictions and closed borders due to the coronavirus, according to prosecutors, were the reasons that initially contributed to the transfer of highly profitable Indian hemp cultivation to Greece, instead of the old route – imports from Albania. And, as it turns out, it continues to this day, despite the lifting of measures, in the Greek mountains.

Workers also moved from the neighboring country to work the plantations and were paid in gold to live in the mountains during the growing season.

It is known from the trial in earlier cases that those arrested in Larisa received a cash fee of 30,000 euros each, and along with the harvest, as a bonus, they also received 10 kg of hashish, which they could use as they saw fit.

Albanians know how to grow hashish

Albanian growers know how to grow hashish and how to do it in the mountains. They camp in the backcountry from April, growing “quarter” varieties until October.

“Hashish plantations in Greece, Greek media: Albanians are paid 30 thousand euros, they are given 10 kg of premium plants!” – this is the name of an article in the Albanian newspaper gazetashqiptare, which covered the issue of hashish production.

In Larisa and especially in Mavrovouni Agia, when the “gardeners” are noticed by the police, they climb to higher parts of the mountains. Or, when they are overlooked, clearing forest land for a new growing season.

It is known that “cannabis growers”, leaving, left behind 40 kilograms of hashish. In addition, on July 24, 2020, the Larissa Drug Enforcement Department carried out an operation in Elafo, where two Albanian citizens were arrested on a plantation of 373 cannabis dendrils. 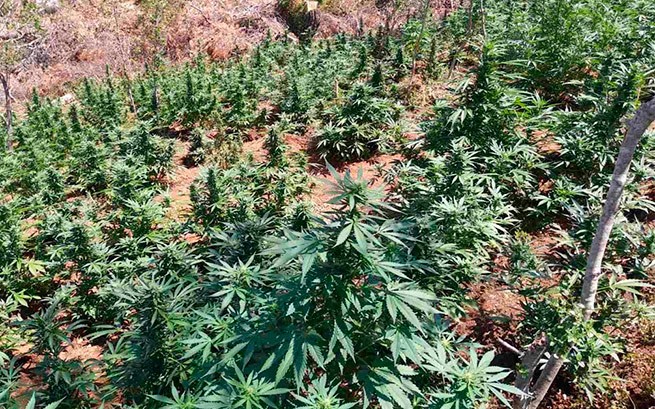 They organize their lives comfortably

With the last plantation for two years on the same mountain (Mavrovouni) of Agia, three large plantations were identified in three different mountainous and inaccessible areas (Elafos, Rakopotamos, Sklitro). It took the police hours of walking to reach them.

As was confirmed on the last plantation, the criminals arrange for themselves a comfortable stay, since they will have to stay in the mountains for several months, but this does not mean that they do not have replacements.

So, they build makeshift tanks for irrigating plantations, purchase agricultural materials (fertilizers, drip irrigation, etc.), as well as durable food products. At the same time, precautionary measures, especially with the help of aerial surveillance, are especially important, since the cultivation sites, due to their inaccessibility, are “impossible” to be reached on foot, since the nearest rural or forest road is a few hours’ walk.

At the last hashish plantation in Sklitros, in the area of ​​”Elaforkerato” (at an altitude of 600 meters from the sea), in addition to 2193 dendrils (the largest plantation found in the prefecture to date), which were seized by the police, 22 kilograms of hashish were found in cones, not counting the amount collected in the previous period.

According to EL.AS., based on the number of cannabis dendrils seized, the criminals could collect about 5 tons of hashish worth 10 million euros from the plantation – a figure that, on the one hand, confirms the huge profits from the trade in addictive substances, and on the other hand the other allows you to easily pay a salary of 30,000 per month.

In the house of the arrested person, in the village of the municipality of Killeler, three passports of Albanian citizens were found and confiscated, and EL.AS. established the identity of three of his compatriots and is looking for another of his accomplices. According to E, the “cannabis foreman” denies the allegations.