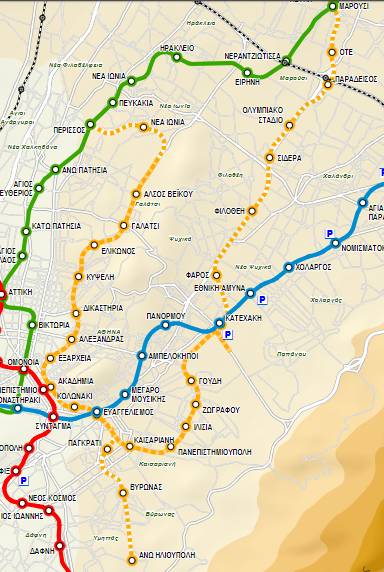 Gradually, the “foundation” is being laid for the construction of a new 4th metro line, which will completely renew the picture of the capital’s transport system.

Preliminary work on the construction of the line continues with the same intensity, which will radically change the transport map of the capital, will allow the population to get from Gudi to Kipseli in just 13 minutes.

Construction sites have been created in almost all areas where new stations of the 13-kilometer line will be built, which will connect Alsos Vejka with Gudi. This causes significant inconvenience to those who have to move around in the city center, especially in Kolonaki and the area of ​​st. Panepistimiou and Akademias. Traffic on them is difficult, as large sections of the road are occupied by construction sites.

Given the special circumstances, the concern “Metro Attiki” and ΕΛΑΣ inform citizens on temporary traffic rules introduced in the adjacent territories.

Particular attention has been paid to minimize the inevitable inconvenience: keep the “open” streets as much as possible and at the same time ensure the supply of shops, the loading and unloading of vehicles, facilitate access to the ΟΑΣΑ-ΤΑΞΙ stop and serve the permanent residents of the area during the construction of the metro line.

It should be noted that the commissioning of the 4th metro line will directly affect the functioning of the city, significantly contributing to the overall improvement of the quality of the environment and the life of citizens in general. By 2030, the first section of line 4 of the Attiko metro will serve at least 341,000 passengers per day.

Line 4 will stretch to Pagrati and Vyronas, then connect the areas of Psychiko, Chalandri, Marousi, Pefki and Likovrisi, after which it will continue west to Nea Ionia, New Philadelphia and Agios Anargyros, ending at Petroupoli.

It is expected that the project, in addition to creating new jobs, will improve the state of the environment.

The first section of the Veikos-Goudy Forest Park line was designed to serve the many densely populated areas of Athens. Four new stations will be built in the city center (Exarchia, Akadimia, Kolonaki, Evagelismos). The metro line will facilitate the unloading of the existing central stations, as well as provide communication with many important facilities and institutions, such as hospitals, educational institutions, etc.

Once the metro is put into operation, traffic is expected to decline as around 53,000 vehicles per day will be restricted. The new line will reduce the level of carbon dioxide in the atmosphere by 318 tons. As part of the construction program, landscaping work is envisaged that will decorate Athens.

The memorandum of cooperation concerns section A of line 4 (Veikos-Gudi Grove), about 13 km long and with fifteen metro stations: