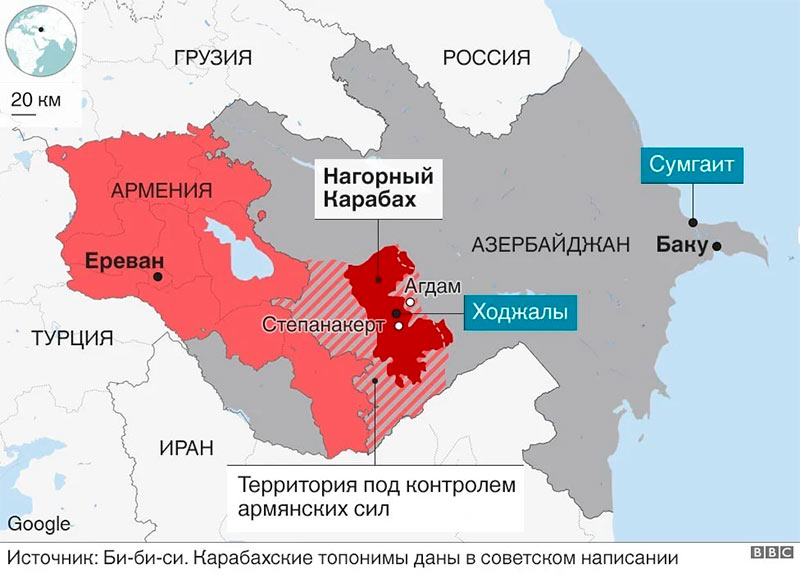 Azerbaijan has announced an anti-terrorist operation in Nagorno-Karabakh. Active hostilities have already begun.

One of the Azerbaijani soldiers died as a result of the Armenian shelling of Nagorno-Karabakh. As a result, Armenia was accused of gross violation of the agreement on Karabakh, the Ministry of Defense of Azerbaijan:

“On the morning of August 3, members of the illegal Armenian armed formations on the territory of Azerbaijan, where the Russian peacekeeping contingent is temporarily stationed, subjected to intense fire at the positions of the Azerbaijani Army in the direction of the Lachin region. As a result, soldier Kazimov Anar Rustam oglu became a martyr from a bullet wound.”

Concerning Ministry of Foreign Affairs of Azerbaijan accused Armenia of violating the agreements on Karabakh. The message says:

“The bloody incident that took place on August 3 once again demonstrates that Armenia is grossly violating the trilateral agreement, and also undermines efforts to normalize relations between the two states. It also shows Armenia’s disrespect for the efforts of international mediators.”

At about 15:00 local time, in the northwestern direction of the line of contact, in the zone of responsibility of the Russian peacekeeping contingent, Azerbaijani units used strike UAVs, as a result of which one serviceman of the Nagorno-Karabakh Defense Army was killed. Another 8 people received injuries of varying severity.

Earlier on Tuesday, the NKR Defense Ministry reported on the fighting in the area of ​​the Lachin corridor linking Armenia with Nagorno-Karabakh, as a result of which there were 15 wounded and 3 dead on the Armenian side.

According to preliminary data, units of the Azerbaijani armed forces occupied a height near the village of Salatyn. In addition, edition report writes that the Azerbaijani army destroyed an artillery military unit in Heyvali and at least one enemy post.

The Ministry of Defense of Azerbaijan reported that the fighting took place on the territory where the peacekeeping contingent from Russia is located. According to preliminary information, there were up to 2,000 Russian soldiers in the Lachin region.

Nagorno-Karabakh announced partial mobilization. The corresponding decree was signed by President Arayik Harutyunyan. Armenian Prime Minister Nikol Pashinyan has already made a statement that the situation in Nagorno-Karabakh is tense and could become a crisis.

In 2020, Nagorno-Karabakh was at the center of a six-week war that claimed more than 6,500 lives before culminating in a Russian-brokered ceasefire.

In accordance with the agreement, Armenia handed over part of the territories controlled for decades, and Russia sent about 2,000 “peacekeepers” to oversee the truce.