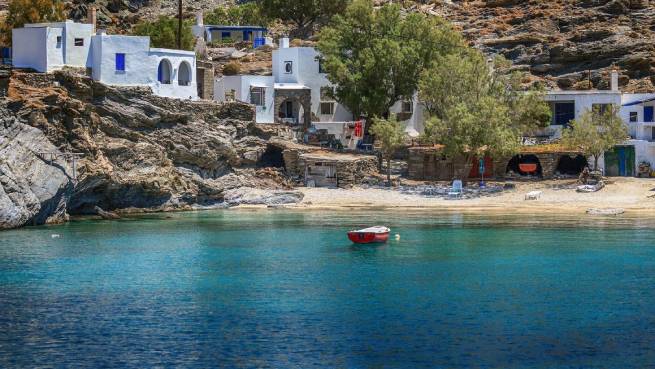 Five Greek islands, along with a comfortable stay, are ready to offer their guests an immersion in the atmosphere of ancient myths that fills them.

The ancient legends associated with these islands travel through time for many centuries, and it is difficult to say where is fiction and where is reality. But if you come to Greece and want to feel the mysterious atmosphere of ancient Hellas, you should definitely go to the Cyclades – Tinos, Syros, Santorini, Milos or Naxos.

Zyknia is the highest mountain of the island, whose peak (725 m) rises above the northeast coast of Tinos and is visible from a distance of many kilometers. According to legend, the children of the North Wind, Ziti and Kalai, were buried on the top of the mountain, whom Hercules killed, unable to withstand their provocations. When the North Wind learned of their death, he became angry and left his children, the winds, free. Since then, they have been blowing furiously on this mountain day and night.

Some ancient sources also mention that the god Aeolus, or the god of the winds, was worshiped on Mount Zyknia, and a settlement and a sanctuary were founded there. Until now, many confirmations of this are found in the area.

Every year the number of visitors to Syros, the unique island of the Cyclades archipelago, increases. Tourists are attracted by the mansions of Ermoupoli (“the city of Hermes”), the medieval charm of the picturesque Ano Syros enchants.

The legend about the creation of the island is associated with the first king of Syros, Kyranos (Κοιράνο). When his ship sank in the sea between Paros and Naxos, the dolphin that rescued him carried Kyranos to the cave that today bears his name. Possessing many virtues, he was adopted by the islanders and became their king.

The pearl of the Cyclades, as Syros is also called, and its capital is, according to legend, the birthplace of Hermes, although the opinions of scientists here differ – many argue that it was Arcadia. However, historians are sure that the god of wealth, luck and travel must have had a special meaning for the island, since the name of the capital of Syros, Ermoupolis, translates as “the city of Hermes”.

The birth of the island of Santorini is associated with the Argonauts, the myth of which says that during an attempt to return the Golden Fleece, they landed in the current Anafi, where Euthymus (the son of Poseidon, the god of the sea, and Europe) dreamed that he was making love to a nymph. Then she announced to him that she was pregnant, and she needed a calm and safe place for childbirth, giving Evfim specific instructions: to throw a clod of earth from Anafi into the sea.

When Evfim woke up, he decided to follow the instructions of the nymph: he threw a clod of earth and was surprised to see how a miracle happened: the island of Santorini appeared from the sea. Many tourists from all over the world enjoy the magnificence of this unique island and admire the most beautiful sunset on the planet. 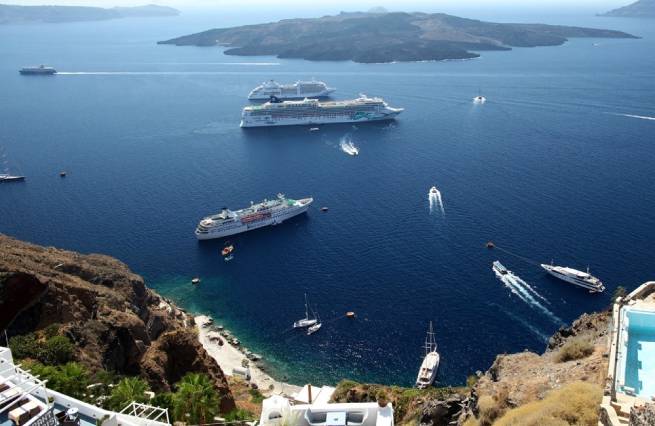 Greek mythology tells how the Athenian king Theseus abandoned Ariadne, the daughter of the Cretan king Minos, on the island of Naxos. They met during one of Theseus’ adventures when he sailed to Crete to stop the tragic tradition established by Minos: every nine years he fed the Minotaur – the son of his wife, half man and half bull – to seven young men and seven girls from Athens.

When Ariadne saw Theseus, she immediately fell in love with him. The loving couple stopped at the fabulous island of Naxos, where they enjoyed a romantic walk. However, Theseus left, waiting for her to fall asleep. Dionysus, god of wine and fertility, found her, married her and gave Ariadne four children.

Milos attracts with fantastic beaches, the most popular of which are the lunar Sarakiniko and Kleftiko. The myth tells that the goddess of love and beauty Aphrodite fell in love with the beautiful demigod Adonis. He had a friend, Milos, who was married to Pelia. The couple had a son named Milos after his father. When Aphrodite’s husband and god of war Ares found out about Aphrodite’s affair with Adonis, he killed him, taking the form of a giant boar.

Upon learning of the death of his best friend, Milos committed suicide. Following him, Pelia, in love with her husband, also parted with her life. Aphrodite, deeply moved by these manifestations of love, took the orphaned Milos under her wing and went with him to a new island, which became one of the habitats of the goddess who endowed the island with unearthly beauty.