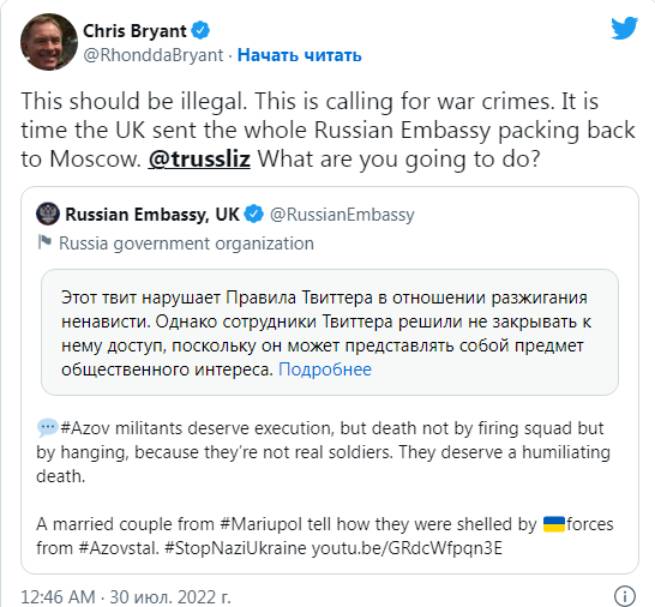 The Russian Embassy in the UK yesterday justified the killing of Ukrainian prisoners of war and posted a message on Twitter about their death in Yelenovka:

“Azov fighters deserve to be executed, but not by shooting, but by hanging, because they are not real soldiers. They deserve a humiliating death.”

According to “European Truth”the social network Twitter marked the message as violating the rules on hate speech, but decided to leave it open “in the public interest.”

The Ministry of Foreign Affairs of Ukraine, in response to this tweet, said that Russian diplomats are complicit in war crimes in Ukraine and should be held accountable.

Later, the Russian embassy said that this was a quote from an interview with “a married couple from Mariupol”, in which they said that they were “fired upon by Ukrainian fighters from Azovstal.”

“This should be illegal. This is a call for war crimes. It’s time for the UK to send the entire Russian embassy back to Moscow. Liz Truss, what are you going to do?”

Recall that on July 29, Russian media reported on the shelling of a colony in Yelenovka, Donetsk region, where Ukrainian prisoners were kept. The media claimed that at least 53 people died.

On Saturday, on Sophia Square in Kyiv, relatives of Ukrainian prisoners of war from Azovstal and activists called on the world community to respond to the tragedy that occurred on Friday in the colony of occupied Yelenovka. They said that when the defenders of Azovstal laid down their arms and surrendered, the UN and the International Committee of the Red Cross assured that nothing would threaten their lives and health.