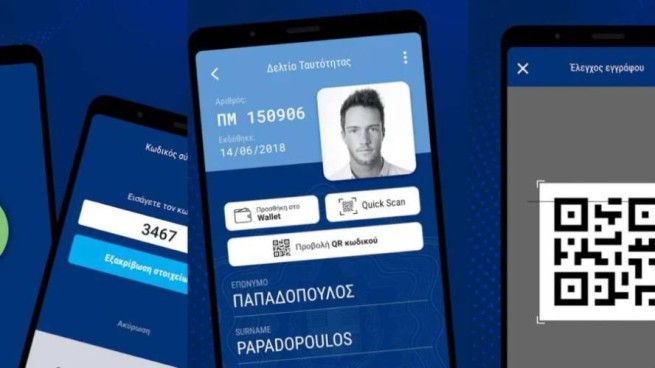 The innovative app, available this week on the App Store and Google Play, allows every citizen to have an ID card and driver’s license in their mobile phone.

Platform Gov.gr Walletwhich digitizes police ID cards and driver’s licenses, has been a hit, as evidenced by thousands of downloads since day one.

innovative app, Available from yesterday on the App Store and Google Play, allows every citizen to have an identity card and driver’s license on their mobile phone. Quickly and easily, by “downloading” the new application in a completely secure way, citizens can receive their personal documents (identity card and driver’s license) in digital format.

It is a 100% Greek company that designs and develops integrated customer relationship management solutions, Cognity, which has successfully implemented some of the most complex yet landmark projects in Greece on behalf of large companies from a wide range of industries such as banking, telecommunications, insurance , energy.

Based in Athens and present in more than 10 countries, the company is transforming the digital infrastructure of large organizations with a team of 450 professionals with the highest international standards of experience.

As for the gov.gr Wallet app, Cognity claims it makes it faster and easier to identify citizens where needed, in both the public and private sectors. At the same time, it ensures the safe use of documents and reduces the possibility of forgery, and also allows the document to be canceled if it is lost. An optimal user experience, where only a few clicks are required to store and display digital documents, as well as a harmonious and secure connection of the application with the digital infrastructure of the state, were identified from the very beginning as key goals and success criteria. When developing and implementing a digital wallet, the most stringent international security standards for the protection of personal data were taken into account.

Gov.gr wallet – digital wallet is a basic digital infrastructure for future storage of other personal documents such as diploma, vehicle registration, MOT certificate and social security documents. This is another important step in modernizing the functioning of the state.

On the occasion of the completion of the government digital wallet project, Georgios Gazepis, President of Cognity, said: “We are proud that our country has been undergoing an unprecedented digital transformation in recent years. And we are even more proud that Cognity is becoming an intermediary in the emergence of a new, digital state. technology is not an end in itself in our philosophy, it is a useful and critical ally of the state with one goal: to make life easier for all of us by promoting the digital independence of citizens, through the necessary capabilities and services that will unlock the potential of Greek society.”

PS It would be good if the authorities announced the cost of such projects. It will be different, as in the case of the website of the Greek Parliament (and not only), when the performer “received” 1 million for a work worth 500 euros. In most democratic countries of the world, such projects are tendered, and the amount that the winner will receive is announced publicly. But Greece, which signed this law many years ago and even created the National Transparency Authority, is in no hurry to share such information with the country’s public.