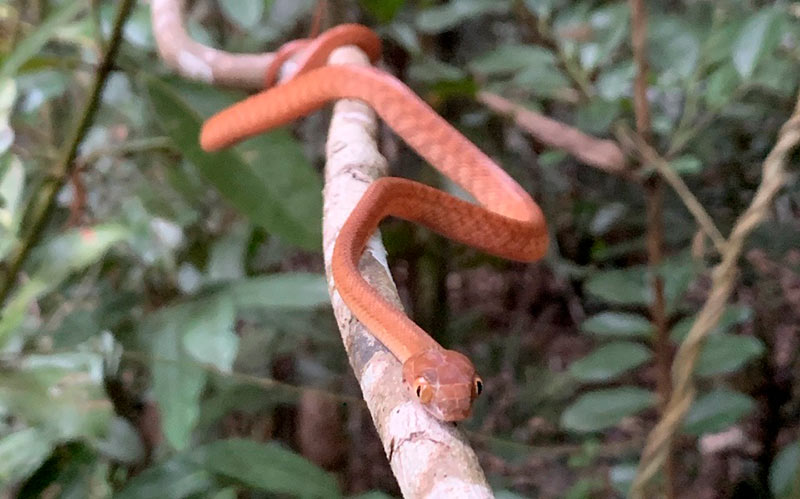 Scientists calculating the economic damage caused by invasive* animals around the world have found that two species are causing the most damage of all.

According to local fishermen, schools of dangerous rabbit fish filled the sea in Rhodes. Local old-timers say that in the sea, towards Lindos, the waters are teeming with specific fish, which under certain conditions can become dangerous for humans.

The American buffalo frog and the brown tree snake have since 1986 caused a total complexity, $16.3 billion in global damage. In addition to the environmental loss, these two invasive animals have destroyed crops and caused costly power outages.

The researchers hope their results will attract more investment to help block invasive species in the future.

Writing in Scientific Reports, the scientists estimated that the brown tree snake alone was responsible for $10.3 billion in total damages – due in part to its rampant spread across many Pacific islands. In Guam, where the venomous reptile was accidentally introduced by US Marines last century, the current population of snakes is causing widespread power outages as they slither over power lines and cause costly damage.

Over 2 million brown tree snakes inhabit the small island in the Pacific Ocean, with one estimate of up to five such snakes per acre of Guam jungle. Island ecosystems are considered to be more vulnerable to invasive species, where they pose a greater threat of extinction to native animals and fauna. 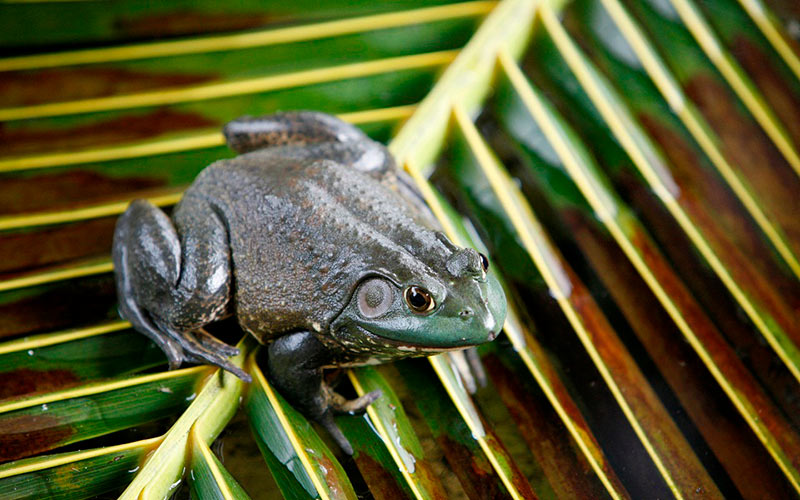 In Europe, the dramatic increase in American buffalo frogs has required ambitious and costly management programs. To prevent the spread of the amphibian, which can be up to 30 cm long and half a kilo in weight, officials have been forced to install costly fencing to keep the frogs away from known breeding grounds.

According to an earlier study EUAccording to the authors, fencing just five lakes to prevent amphibians from escaping cost German officials 270,000 euros (£226,300). The amphibian is said to eat almost anything, including other buffalo frogs.

Another species, the common coca frog (known in particular to little friends Dora Travelers), is accused of causing economic damage in a different way: the extremely loud marriage song is believed to have caused property values ​​in the affected areas to plummet.

The name of the frog (Coqui) in Puerto Rico comes from the sound it makes when it calls its mate. The authors of the study hope their findings will encourage officials to invest more in invasive animal control measures and other biosecurity measures in the future.

Greece also has problems with invasive fauna, in particular, we are talking about the ill-fated fish rabbitwhich a few years ago appeared in the Mediterranean Sea and literally occupied the seas surrounding Hellas.

Researchers from the Hellenic Center for Marine Research report that the first appearance of the rabbit fish, whose natural habitat is the Red Sea, Pacific and Indian Oceans, was officially recorded in the Mediterranean Sea in 2003.

“In the Greek maritime region of the Dodecanese, the rabbitfish has the largest populations. The problem is that she “breeds like rabbits.” The habitat of a dangerous predator is expanding rapidly, and experts are already observing dangerous fish in the Ionian Sea, on the coast of Croatia, Malta and Tunisia,” they note. 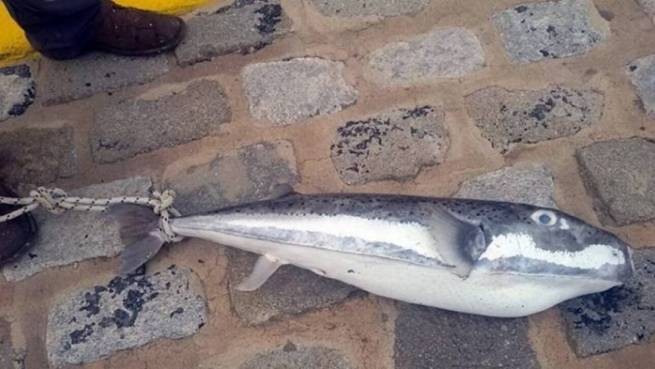 According to local fishermen, schools of dangerous rabbit fish filled the sea in Rhodes. Local old-timers say that in the sea, towards Lindos, the waters are teeming with specific fish, which under certain conditions can become dangerous for humans.

Rabbit fish is a terrible and dangerous fish, the meat of which cannot be eaten, because it is particularly toxic – it contains tetradotoxin. This can cause respiratory distress, circulatory failure, muscle paralysis, and even death. Rabbit fish is related to the famous puffer fish, which in Japan can only be prepared by experienced chefs who have undergone specialized training. However, even despite this, thousands of people die every year from poisoning with dishes from this fish in Japan.

Flocking in schools or found in large numbers in the sea area, this fish does not hesitate to attack even swimmers or those who dive or snorkel. Her teeth are very sharp and cut like a razor, and the bite is called a “vice”. He can cut an aluminum soda can like paper.

Is the person to blame?

Human economic activity is one of the main reasons for the spread of various species of animals and plants. Since ancient times, together with people, they moved from one part of the world to another. And the more intensively the ties between the regions grew, the more often this happened and is still happening.

For the first time, the problem of invasion at the global level was noted in the 1990s. The UN Convention on Biological Diversity (Rio de Janeiro, 1992) states that the member countries undertake to prevent the spread and destroy alien species in order to preserve native fauna and flora.

According to the National Security Concept of Belarus and the Strategy for the Conservation and Sustainable Use of Biological Diversity for 2011-2020, the penetration of invasive alien species of wild animals and wild plants into the environment is one of the threats to national security in the environmental sphere.

Species that have invaded new territory fall into two categories: alien and invasive. Alien is a species that does not yet negatively affect the native fauna and flora, or until such an impact is determined. As soon as it appears, the species goes into the category of invasive.

Invasive species – located outside its natural range, the distribution and abundance of which pose a threat to the conservation of biological diversity, causing harm to certain sectors of the economy, as well as human life or health. 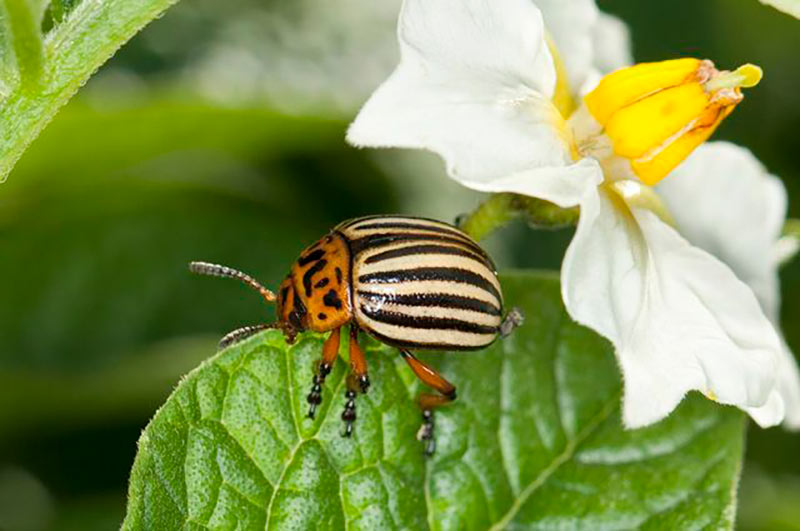 The Colorado potato beetle (in Latin Leptinotarsa ​​decemlineata is a ten-lined leaf beetle, since it has ten stripes). It feeds on leaves and seedlings of plants of the nightshade family: potatoes, tomatoes, eggplant, sweet peppers, physalis, dereza, henbane … The gourmet has potatoes in the first place. For the winter, it burrows into the soil by 20-50 cm. In the spring it crawls out, begins to actively mate and devour seedlings. But the main danger to crops is not adult beetles, but their larvae, real gluttons, cleanly nibbling potato leaves. During the day, the female lays from 5 to 80 eggs, during the summer – up to 1000. A beetle fertilized in autumn after hibernation can, without the participation of a male, become the ancestor of a new focus in a season, numbering up to a million troglodytes! Given the numerous offspring of her prolific children, grandchildren, great-grandchildren. So try to completely destroy this wrecking tribe. One female, let it survive.

The leaves and shoots of plants of the nightshade family (Solanaceae) contain the poison solanine. Poisonous and green potato tubers. (Because of which, in past centuries, there were cases of poisoning of Russian peasants. The people even staged “potato riots” against the attempts of the authorities to impose these “damn apples”!) Beetles, eating nightshade, accumulate toxins in themselves. Therefore, they have very few enemies in nature. Adults are eaten only by guinea fowl, larvae by pheasants. At the same time, pests accustomed to solanine quickly adapt to agricultural crops. In the absence of their favorite potatoes, they can even survive on henbane and dope until they find their usual food.

The homeland of this beetle is the Sonoran zoogeographic subregion in northeastern Mexico. From there, the beetle spread north and reached the United States, where already in the 19th century it adapted to eat potatoes bred by settlers. In the same place, the insect was first discovered in 1824 by the American naturalist and entomologist Thomas Say. The first serious damage to potatoes by this beetle was noted in 1855 in Nebraska, but it received its popular name “Colorado” only in 1859, after it devastated potato fields in Colorado. Despite all the precautions, the new pest quickly spread throughout North America, and in 1876-1877 crossed the Atlantic Ocean with cargo on ships and first appeared in Europe, in the vicinity of Leipzig. 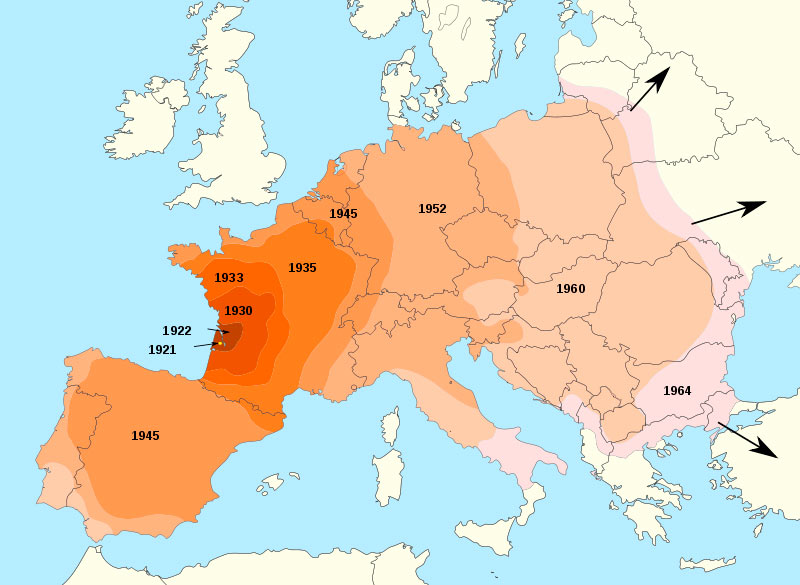 After this, the Colorado potato beetle was brought to Europe several more times, but its foci were successfully destroyed, until in 1918, during the First World War, it managed to “fix” itself in the Bordeaux region (France), where the American military base was located. From here, the beetle began its victorious march through the countries of Europe (see map), only missing the UK, where it still rarely appears.

Moving east along the winds prevailing in the summer months, by the end of the 1940s, the beetle reached the borders of the USSR. Its first outbreaks were discovered in the Lviv region in 1949. Then in 1953 he appeared simultaneously in the Kaliningrad, Volyn, Brest and Grodno regions.

Finally, on the hot windy days of May 1958, a massive flight of the Colorado potato beetle into the Transcarpathian region occurred from Hungary and Czechoslovakia. At the same time, waves of multi-million “landing” of beetles from Poland were thrown onto the Lithuanian and Kaliningrad coasts of the Baltic Sea. Since that time, the mass resettlement of the Colorado potato beetle in the USSR began.

In the dry year of 1975, along with wagons loaded with straw for livestock feed, the Colorado came from the regions of Ukraine to the regions of the Southern Urals, and by the end of the 20th century even reached Primorye.

Losses from the Colorado potato beetle significantly exceed the losses from other species of invasive fauna. However, no one considers them …

Rabbit fish is a terrible and dangerous fish, the meat of which cannot be eaten, because it is particularly toxic – it contains tetradotoxin. This can cause respiratory distress, circulatory failure, muscle paralysis, and even death. Rabbit fish is related to the famous puffer fish, which in Japan can only be prepared by experienced chefs who have undergone specialized training. However, even despite this, thousands of people die every year from poisoning with dishes from this fish in Japan.

Flocking in schools or found in large numbers in the sea area, this fish does not hesitate to attack even swimmers or those who dive or snorkel. Her teeth are very sharp and cut like a razor, and the bite is called a “vice”. He can cut an aluminum soda can like paper.