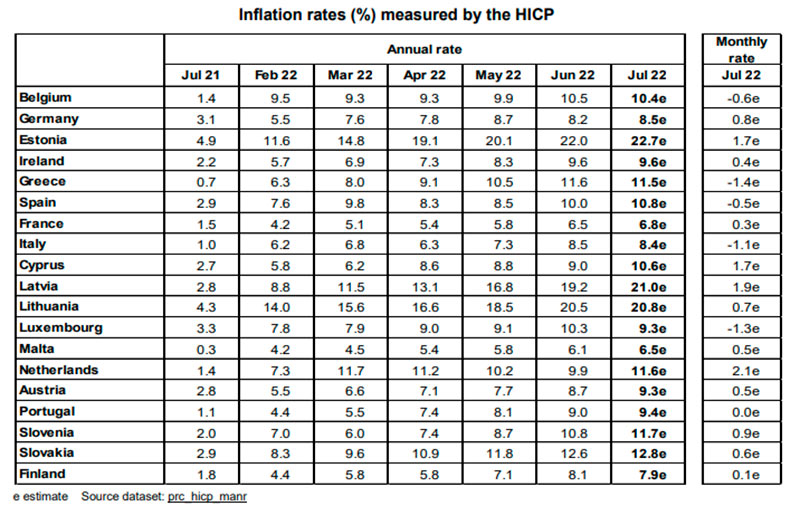 Eurozone inflation in July reached 8.9%, while in Greece 11.5%, according to Eurostat data on the harmonized index.

It is worth noting that for the eurozone there was an increase from 8.6% in June, and for Greece, the harmonized June figure was 11.5%.

Hod Lagarde
It is worth noting that exactly one week ago, the European Central Bank announced the first interest rate hike in 11 years, confirming analyst and market estimates that the ECB (which looked more relaxed) would be forced to follow the path they had chosen: to establish a federal reserve , Bank of England and others to tame runaway inflation.

Christine Lagarde’s Governing Council reaffirmed its firm commitment to its price stability mandate by raising interest rates to ensure inflation returns to its 2% target over the medium term and signaling further increases in the coming months.

Commission Predictions for Greece
The commission predicts a jump in inflation to 8.9% for Greece in 2022, while at the same time estimating GDP growth to 4%. According to European Commission summer estimates, headline inflation is projected at 8.9% in 2022 and 3.5% in 2023.

In addition, real GDP is projected to grow by 4% in 2022 and slow down to 2.4% in 2023 (experts Moody’s believe that in the long term, Europe will face a recession and economic downturn, and the increase in GDP will occur only due to inflation).

Two months earlier, in mid-May, in its spring assessments, the European Commission projected for Greece this year a growth rate of 3.5% and inflation of 6.3%. Due to a significant revision in 2022 figures, the growth rate for 2023 has been revised up to 2.1% from 3.1% projected in spring estimates.

IFO report
Earlier Thursday Institute IFO said inflation in Europe’s largest economy may have peaked, citing a survey that showed the number of German companies planning to raise prices fell in July for the third month in a row.

But the economist LBBW Jens-Oliver Niklash warned that the worst may not be over yet. “I would not go so far as to say that we have already reached our peak,” he said, citing uncertainty about the cost of energy.