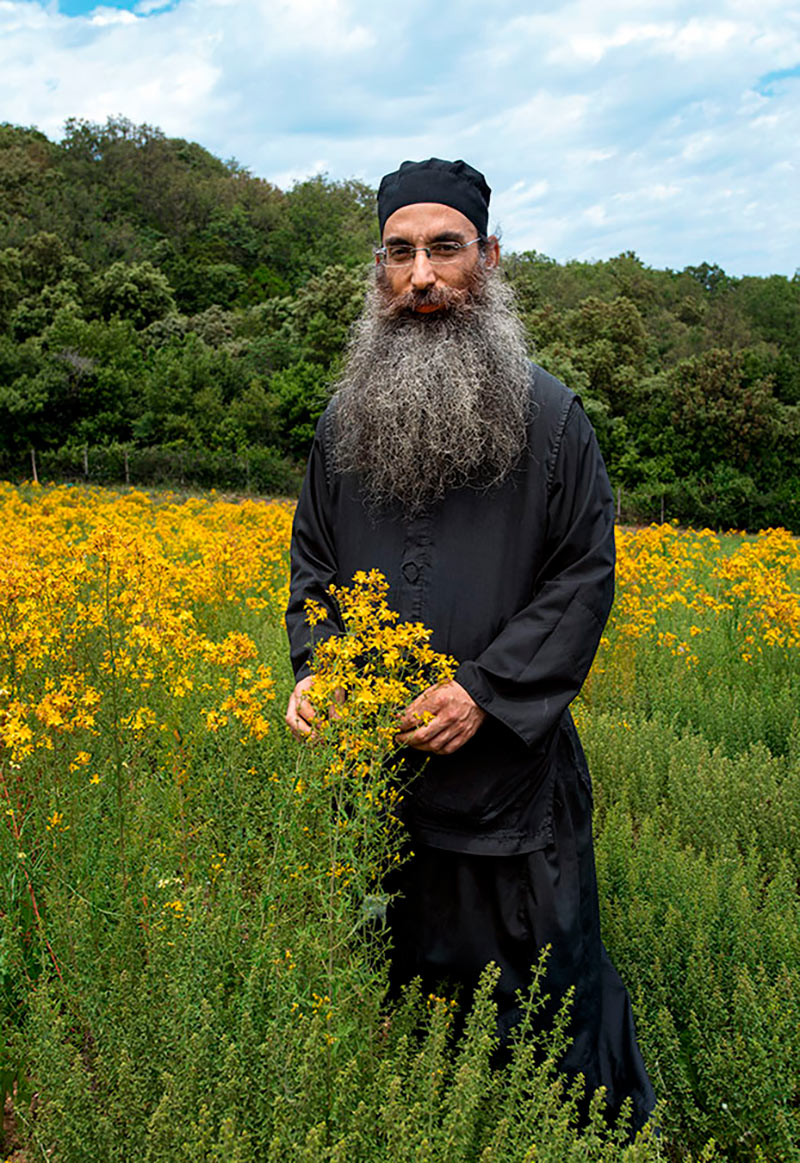 The monks of Athos are engaged not only in prayers, painting icons and creating various crafts for pilgrims. A whole industry is working on the Holy Mountain to create medicines from natural raw materials.

Licorice tincture for detoxification and acceleration of metabolism from the Skete of Agios Nikolaos. Wax ointment from the monastery of St. Xenophon. Lip balm with almond oil and strawberry aroma from Skete of the Archangels. Pearl bath with calendula and honey for skin diseases from St. Vatopedi Monastery. This and other Athos products were presented at an exhibition held in Thessaloniki.

When in September 2013 an exhibition of products from Mount Athos opened in one of the halls of the Macedonia Palace, Nikos Karagiannakis could not even imagine what would follow in a few months.

In 1995, the then 40-year-old advertiser visited the Garden of Our Lady for the first time. Communication with Athos monks, nature, pilgrimage tourism, discussions held in monasteries influenced Nikos Karagiannakis, and in 2010 he published the Artion magazine, 50% of whose materials were devoted to Mount Athos. “The magazine was published only for expatriates abroad. They constantly asked us what Mount Athos produces and how we can send products abroad. So we organized an exhibition in Thessaloniki with products produced by 20% of the monasteries of that time,” he says. The exhibition was a great success and was even extended. One month in a businessman’s hotel Ivan Savvidis turned into three, and soon after that, the fair of goods from Mount Athos turned into a store of the same name, located in the basement behind the church of Agia Sophia in the center of the northern capital.

Today, Mr. Karagiannakis’ business has moved to a large multiplex in Pilea in Thessaloniki and has a branch in the city center. He started with 120 items, and today he has 800 items from Athos monasteries and monasteries throughout Greece, 60% of which are cosmetic and herbal products, which are very popular with consumers.

Similar products appeared on the shelves of the Athos Hestia and Monastiriya stores, which operate on the territory of Mount Athos, and stores with Athos products are also opening in Athens.

Panagia left Ierissos in Halkidiki at 8.30 am, and a few hours later a small boat loaded with pilgrims sailed to the holy monastery of Vatopedi. The monastery, one of the largest on Mount Athos, built on the northeastern side of the peninsula, with a history dating back to the 4th century, was caught in the eye of a hurricane in 2008 in connection with a land exchange case with the state, and in 2017 all participants were acquitted .

Today, he is considered a pioneer in the organization and production of monastic skin care products, although the monks do not like the term “cosmetics” and prefer to refer to the healing properties of their herbs.

Lavender, calendula, lemon balm, meadow grass, sedge, echinacea, siderite, yarrow, chamomile – a total of twenty aromatic plants and herbs are organically grown by monks and agricultural workers on a 20-acre field, overseen by Hierodeacon Ephraim, who studied agronomy at the Aristotle University and monitors monastery crops. Together with him, we go to the dryer, where the plants go after the harvest, or to the plant for the production of the extract. According to him, the extract, which contains all the healing properties, is part of the monastic shampoos, foam baths, face creams, aromatic soaps and wax ointments. 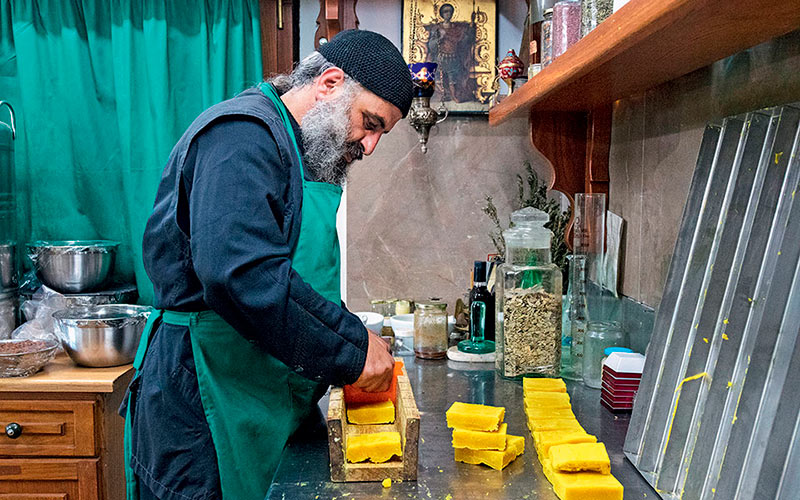 “It seems that this is a new occupation, but in fact it is very ancient,” Father Arsenios tells us in the monastery library. The monks believe that the ancient recipes used by the monks throughout their long history, combined with modern technology, allow the creation of new products with beneficial properties. Within eight years, Vatopaidi, in collaboration with the University of Viterbo in Italy and Greek scientists, set up a laboratory for the preparation and bottling of commercial products.

“The idea to develop the vocation of monks came from foreigners who knew that the wealth of knowledge here should not remain in libraries, but should return to society. Then the environment of Mount Athos, the earth, the fact that we are away from everything that pollutes culture. That’s why they convinced us to spread all this information,” says Father Arsenios.

The products of the monastery are sold under the single name “Dokimon”, since Hippocrates signed what he considered successful, and its distribution in pharmacies and shops was entrusted to the new company “Evkosmiya”. The monks are interested in researching herbal combinations, pharmaceutical companies have expressed interest, and the monastery has prepared another 300 acres of land for the cultivation of aromatic plants. As needs rise, the monastery will collaborate with manufacturing facilities outside of Mount Athos, as has been the case with some pilot products. The proceeds, as we were informed, are directed to charity and the maintenance of the monastery. 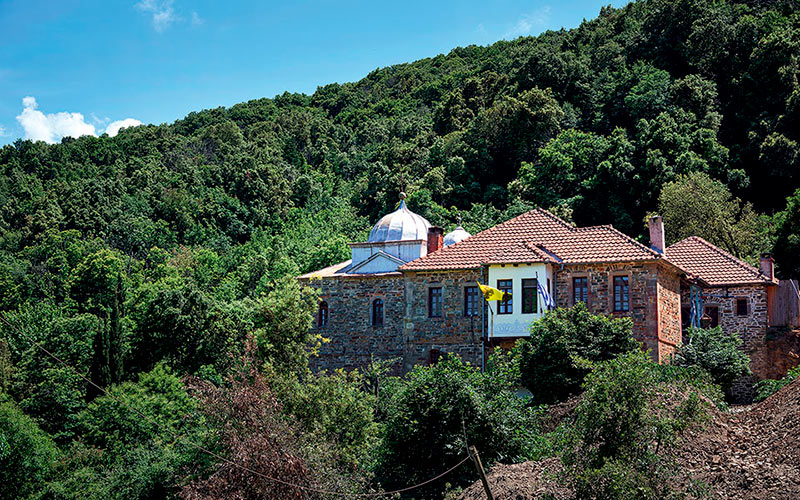 Mount Athos has fertile soils and untouched nature, which attracts the interest of pharmaceutical companies and the caution of some monks.

We ask him if this new activity, spreading in the monasteries on Mount Athos and beyond, is in line with the goals of monasticism. “I believe that everything that is useful to society and does not have any form of dishonesty or immorality in it, is certainly consistent and useful. If, finally, scientists through old manuscripts, knowledge will find a cure for any disease, for example, psoriasis, why don’t people take this stuff?”

Very quickly, wax ointments got a “dock” in telemarketing programs and broadcasts, potential imitators appeared, and the Mount Athos trademark is used uncontrollably by several people who want to sell their products, since it is not protected institutionally. “For an ointment, it’s not enough that Mount Athos is written on it,” says father Meliton from the cell of St. George of the Kutlumusiou monastery. “Many products have Mount Athos written on them, but they are not from here, you need to write the name of the manufacturer, monastery or cell phone number”. 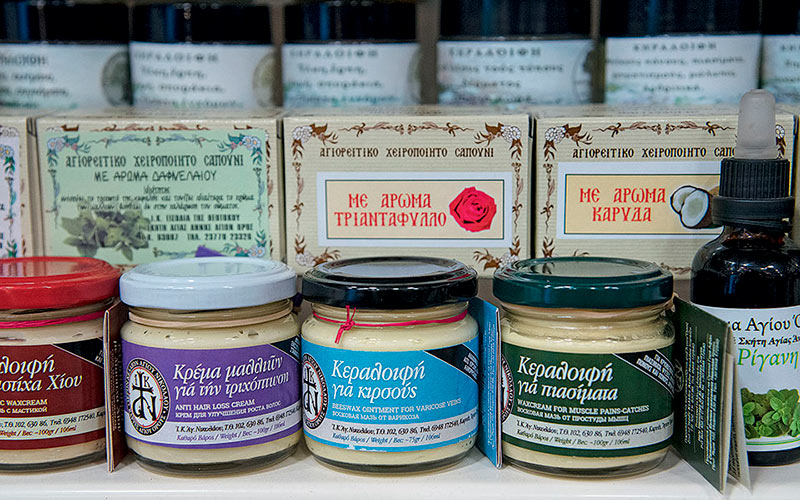 In the “Monastiriaka” store in Karyes on Mount Athos.

“People are looking for environmentally friendly”

Originally from Crete, Father Meliton has been working with herbs for about twenty years and was one of the first on Mount Athos to start making wax ointments and handmade soap in a small workshop in the basement of the cell we visit. He says he keeps his production limited while he cuts a new line of St. John’s wort soaps in quantities he can make himself using his own resources. “There is an increased demand because most of the products in the world are industrial, contain chemicals, and people are looking for something cleaner and more natural. The laboratory that I have is fine with me, I do not think to do anything more.”

Food production is one of the services, that is, the work that Father Meliton performs to provide the pilgrims with the necessary for survival, the hospitality of pilgrims and the maintenance of the Athos cell. He does not want, he tells us, to work with larger manufacturers or companies, which is not what the fathers who live in the cell of St. Nicholas and produce oils, tinctures, anti-aging wax ointments and Mount Athos saffron do not want. “The monk’s handicraft is out of his control and no one knows where it will end up,” they told us, and in their opinion, the demand that society is now experiencing is seasonal and has a limited duration.

A thin line separates the traditional and special from the commercial and mass. However, it seems that the monasteries are investing time and resources into the production of products or crafts that society needs and prove that they are not as far from the ordinary as we might imagine. Whether the old new activity of the soul and the interest of society will affect them will be shown by what best characterizes the long history of Mount Athos: time.