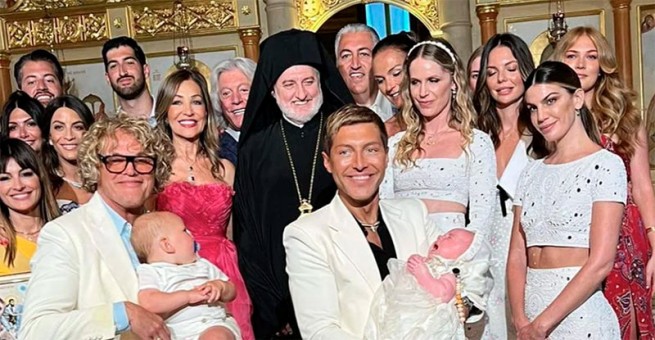 Archdeacon Ioann Khrisavgis, adviser to the head of the Phanar, believes that the Orthodox Church should not only determine its position towards LGBT people, but also accept it as a given of the times.

On July 25, 2022, the Archdeacon of the Phanar Archdiocese in the USA, adviser to Patriarch Bartholomew John Chrysavgis, published an article in which he accused the Church of being cut off “from reality and the world” for criticizing the baptism of the children of an LGBT couple by Archbishop Elpidophoros. The article is posted on religionnews.com.

Chrysavgis believes that the Orthodox Church is overly focused on “ostentatious rituals and flashy vestments” but is afraid to touch on sensitive topics like homosexuality.

“There are certain topics that Orthodox Christians are especially uncomfortable with. The most notable of these is homosexuality, which evokes a lot of passionate emotion but little rational discourse. Simply repeating the catchphrase that we “hate sin but love the sinner” can often to be judgment disguised as compassion – after all, it’s easier to label than to listen.

We should learn from the saints, whom we idealize rather than imitate. Saint Porphyry, who lived from 1906 to 1991, is known for being so “wounded by love” for God that he went to consecrate a “house of notoriety” near Athens’s Omonia Square, offering residents the opportunity to bow to the cross. When reminded of where he was, Porfiry declared that harlots “in a better spiritual state” would accept the cross than many others.

Did he approve of prostitution when he “felt joy and … honor” in blessing these women?

There should be no disagreement about baptism, to which all children are entitled. Why, then, did the actions of Elpidophoros provoke such controversy and accusations? When an independent church addresses the Ecumenical Patriarchate about what happened, I have to wonder what exactly our fears about this event are hiding.

Are we afraid that tradition or truth may be diluted? Maybe we are afraid to unravel the seamless fabric? Nevertheless, the historical church has never avoided difficult debates in councils throughout the ages, even—and especially—when it came to contentious and complex issues such as the sex (or flesh) of Christ and the meaning (or style) of depiction of saints.

Are we afraid to open Pandora’s box? Should the Metropolitan of Glyfada have been more informed about what is happening in his diocese? Or was there another reason why he was in a hurry to wash his hands and cover his tracks? He admits that he would not have the courage to make a decision if he were given all the information.

Should Archbishop Elpidophoros have explained in writing that baptized children do not belong to what the Metropolitan of Glyfada calls a “traditional family”? Do we expect the same for the children of single parents? What happens in the case of atheist parents? And what about parents who are in a civil marriage or not married at all? Do we impose any restrictions on photography or advertising in such cases, as suggested in this case?

Are we afraid of getting too close to “sinners” or perhaps being defiled by sin? The Metropolitan of Piraeus ignored a similar baptism in the center of Athens a few years ago, but was embarrassed by a recent baptism in a neighboring diocese. Too close for comfort? When asked if there were gays among the Orthodox, he allegedly replied that if there are “sodomites” in the church, then “such patients should be distanced from others.” How would the metropolitan respond if asked if there are gay bishops in the church?

His opinion, however, does not matter much because he also criticizes international Zionism and Jewish bankers, the Pope and all heretics. Once he exhorted Turkish President Erdogan to convert to Orthodoxy, otherwise Muhammad would face eternal hell. I think the good metropolitan might be surprised to see who, as it says in the Gospel of Matthew, “precedes you into the Kingdom of God!”

Are we afraid to admit our own discomfort or embarrassment when discussing sexual principles or practices? Maybe it’s time for a frank conversation about sex and gender in the church? Should those who are inclined to condemn the way of life of others – whether they be ordained bishops or intrusive critics – “take out first the log out of your eye, and then you will see how to take the speck out of your brother’s eye.” like Jesus said?

The role of Orthodox Christians is neither to wait for the separation of the sheep from the goats, nor to renounce the sinful world by renouncing everything worldly.

I know of two mainstream texts that dare to deal with homosexuality in a sustainable, respectful and pastoral manner. The first is the Letter of the German Orthodox Bishops to Youth on Love, Sexuality and Marriage, signed by Metropolitan Augustin of Germany in 2017 as chairman on behalf of the Conference of Orthodox Bishops in Germany. The second is a document entitled “For the Life of the World: Toward the Social Spirit of the Orthodox Church” (2020), officially initiated by Patriarch Bartholomew and approved by the Ecumenical Patriarchate.

Of course, no one willingly and voluntarily admits prejudice. Everyone insists that they will never “throw the first stone” – even if they throw stones.

What would Jesus do? Whom would Jesus condemn and how would Jesus correct someone? Whom would Jesus greet, and what behavior would Jesus expect? Our priority should be to exalt one another in the broken body of Christ. If we are honest with ourselves and with God, if we trust the Christian gospel and the Orthodox tradition, I hope that we can lay down our stones, our defenses and our fears, to listen to each other and learn from each other in a spirit of healing and reconciliation”– the adviser to the head of the Phanar emphasized.

Also, Archdeacon John Chrysavgis expressed doubts that the Church voluntarily recognizes its prejudices regarding the baptism of children of LGBT couples.

Recall that Archbishop Elpidophoros, head of the Phanar Archdiocese in the United States, baptized two children of a same-sex “family”, as well as the numbered parent “father”. This situation caused a scandal in Greece. The Greek Church promised to submit Complaint to Patriarch Bartholomewsince Archbishop Elpidophoros did not informed the metropolitan Glifadsky Anthony that the parents of the children are sodomites.