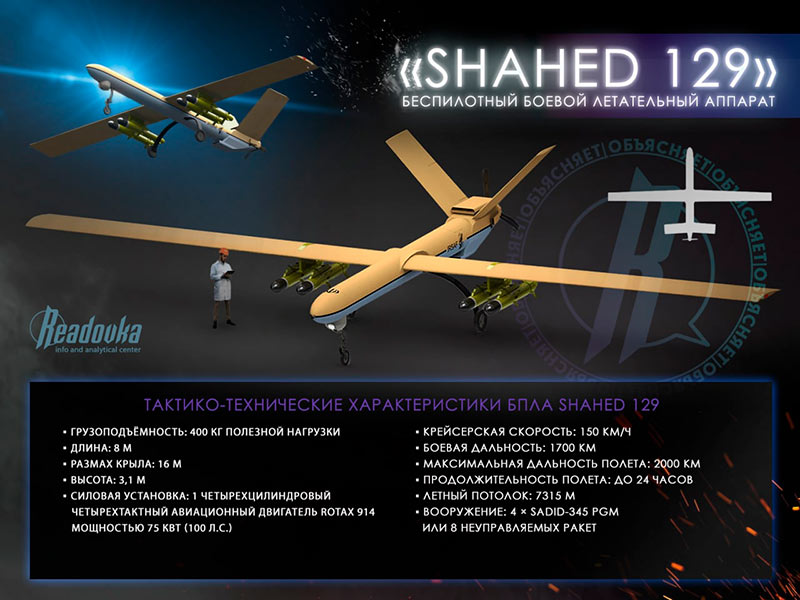 According to various media reports, Iran has already handed over combat unmanned aerial vehicles to the Russian Federation. Part of the batch of Iranian drones was sent via the Caspian Sea, the rest arrived by air.

The basis of the cargo is heavy shock drones Shahed 129. During their development, the Israeli drone Hermes 450 and the American MQ-1 Predator were taken as the basis.

The source clarifies that practically nothing is known about the actual combat characteristics of Iranian drones, since so far they have not been used in large-scale conflicts.

According to the data available on the network, Shahed 129 can be in the air for a day, reach a speed of 150 km / h and move away from the operator by 200 km. Shahed 129 fuselage length is 8 m. Wingspan is 16 m. Claimed combat load is up to 400 kg. It can be armed with Sadid-1 anti-tank missiles (a copy of the Israeli Spike-ER) or a high-precision glide bomb with a fragmentation warhead – Sadid-345. The developers claim that the drone can stay in the air for up to 24 hours.

The Shahed 129 UAVs are in many ways distant relatives of the American MQ-1 Predators, which, by the way, the States promised to supply to the Ukrainians (in the MQ-1C Gray Eagle variant) in the amount of four pieces, but apparently changed their minds. In terms of its class and tasks, the Shahed 129 is close to the Russian Orion, but the Russian development is significantly inferior both in terms of range and payload mass.

Russia and Iran have not officially confirmed such deliveries (and even if they are, they are unlikely to confirm), so we are just waiting to see if drones from Iran appear at the front or not. It cannot be ruled out that this is just a hoax so far in order to test the real level of progress on the issue of the supply of Iranian UAVs to the Russian Federation. How Western countries will react to Iranian drones.

The first to react, and this is not surprising, was Israel, which on July 22 struck missile attack on Damask, destroying a warehouse and a drone assembly plant.

And according to Ukrainian Defense Minister Reznikov, NATO will also transfer anti-radar missiles, which work well at drone control points.