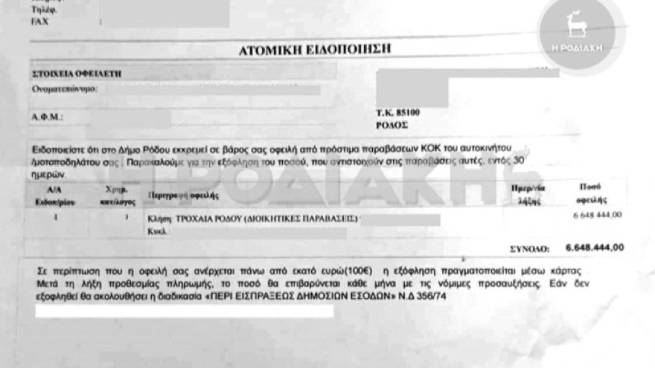 A notice of a fine was attached to the windshield of the car of a resident of Rhodes. And instead of seeing the amount of 100 euros there (for a violation that, as she admits, she committed), she saw the amount that plunged her into a stupor.

The official document had a figure of 6,648,444 euros! After the woman only narrowly avoided a heart attack, she rushed to the municipality to deal with the issue of a “million dollar fine.” “Since I can’t pay by card, I’ll pay you in cash,” she said sarcastically to the officer in charge.

According to information published by the site “rodiaki.gr”, the Greek woman received a notification at the end of June. It concerned the debt for a fine for violating traffic rules, while the competent services urged her to immediately pay the specified amount. After overcoming the initial shock, the woman realized that it was a mistake and contacted the relevant municipal services, attaching the document.

When the car owner turned to the officer in charge, she decided to taunt: “Since I cannot pay this fine with a card, I will pay you in cash!”

Then, according to the site “rodiaki.gr”, the “stunned” employee admitted that it was a mistake and hastened to reassure the woman, saying that she should not worry, and that the services would immediately correct the annoying mistake.