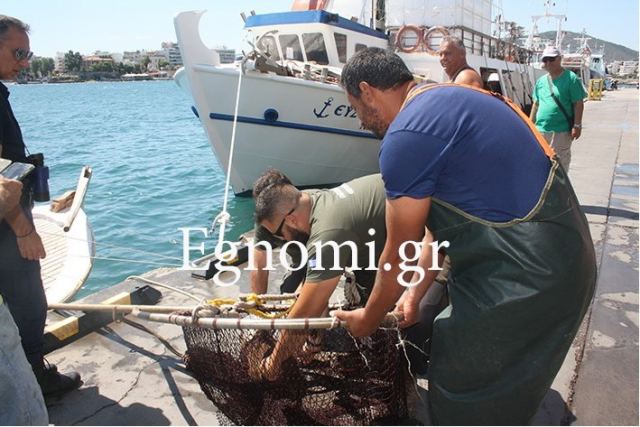 A paradoxical spectacle caused panic among the bathers and the townspeople of Evia when a wild boar was seen swimming near the city beach of Chalkis.

The incident took place right on the coast, in front of the coastal restaurant Stavento, which put local authorities on the ears, since such an extreme event can have consequences for both the wild animal itself and the bathers.

The administration of the central port of Chalkis was immediately mobilizedto get the boar off the beach.

According to local media, local firefighters went to the scene to pick up the animal, but this turned out to be impossible, as he fled … by swimming!

Port guards, firefighters and gamekeepers went on a fishing boat in pursuit. The young boar was caught with a net from a fishing boat, swaddled and, according to firefighters, will be returned to its natural habitat.

It is worth noting that in recent years the number of wild boars in Greece has increased dramatically. The reason is called a pandemic, during which, for almost 2 years, hunting was sharply reduced. Local authorities are also extremely reluctant to issue permission to rangers to shoot wild boars, even if the animals begin to cause significant harm to local farmers.

In January 2021, Vice Governor of Halkidiki begged the ministry to extend the hunting season for wild boars until the end of February 2021. According to him, “The growth of the wild boar population creates problems both for crops and for the movement of citizens on national and provincial roads. Recently, car accidents have become more frequent, which endanger the lives of citizens. In addition, wild boars are considered carriers of dangerous diseases.”

After the ban on hunting, many wild animals appeared in the vicinity of the capital of Greece and, in particular, in the Parnif National Park. One of the residents of the suburb of Ekali filmed wild boar piglets that came to eat at the garbage cans on the outskirts.

Perhaps the piglets themselves are not dangerous, but it is worth considering that next to them, most likely, their mother, a wild boar, is present … And this is an extremely dangerous animal.