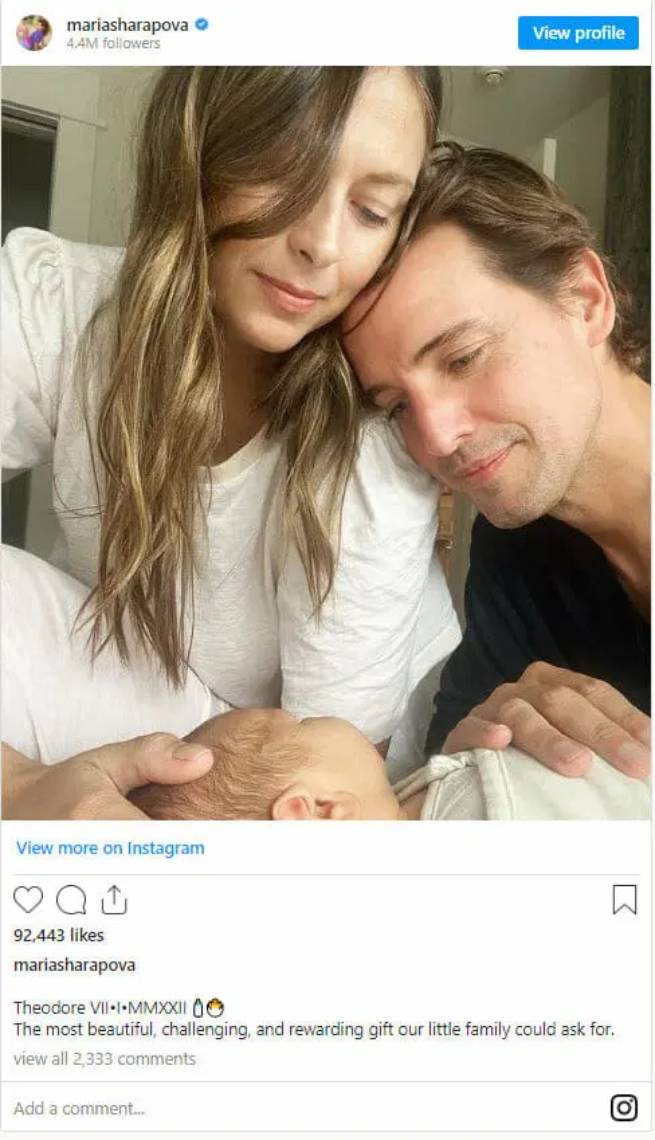 Russian tennis player Maria Sharpova gave birth to a boy on July 1. She announced this on her Instagram page.

The athlete left world tennis and devoted herself entirely to her family. And now she became the mother of a boy named Theodore, according to the Greek edition. newsit.gr.

The 35-year-old Russian tennis player now resides in the US with her husband Alexander Gilks, an American businessman whom she became engaged to in 2021.

Sharapova herself announced the birth of her son, writing on Instagram: “The most beautiful, amazing and pleasant gift that our little family could only dream of.”

As the publication writes RBCSharapova, 35, is the only Russian tennis player to have won every Grand Slam in her career. She won Roland Garros twice and once – US open, Wimbledon and the Australian Open. The athlete completed her career on February 26, 2020. She has been living in the US for 27 years, and in 2012 she founded Sugarpova, a company that makes premium sweets.

Gilks ​​is a 41-year-old British businessman. He co-founded venture fund Squared Circles and co-founded online auction site Paddle8, which he led from 2011-2018 and left after the sale of the company. According to the New York Times, the auction sold over $140 million worth of art in 2015. He is also a board member of the New York Academy of Art.

Russian tennis player Maria Sharapova is included in the ranking of the richest women permanently residing in the United States who have made their own fortune, according to Forbes. The publication estimates the fortune of the Russian tennis player at $ 200 million. In the overall ranking, Sharapova ranks 87 out of 97. As noted in the material, the athlete earned the bulk of her income thanks to tennis, and part of her earnings come from the Sugarpova company founded in 2012, which produces premium sweets.

Sharapova has been living in the US for 25 years. She is still a Russian citizen, but has a residence permit in the United States.
The tennis player became one of two newcomers to the rating under 40 years old. The second debutant is 34-year-old singer Lady Gaga, whose fortune Forbes estimated at $150 million. In the ranking, Sharapova is located not far from her former rival Serena Williams, who was in 83rd position with a fortune of $225 million.

First place in list of the richest women in the usa – ABC Supply co-founder Diana Hendricks, holding the lead for the third year in a row. Hendrix’s fortune is estimated by the magazine at $8 billion.

In second place is Judy Faulkner with a net worth of $5.5 billion. She founded Epic, a software company for medical organizations. Third place went to Meg Whitman, whose net worth is estimated at $5 billion. Previously, Whitman headed eBay, and now short video streaming service Quibi.

From 2004 to 2015, Sharapova topped the list of the highest paid female athletes in the world according to Forbes magazine.