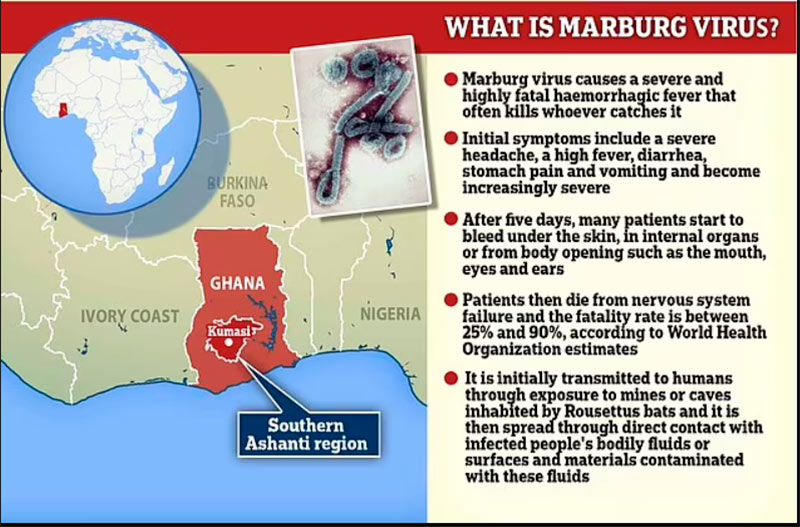 According to UN press release, an infectious deadly Marburg virus has been discovered in Ghana. “Preliminary data of two cases of Marburg virus infection prompted Ghana to prepare for a potential outbreak,” the UN said in a statement.

“If confirmed, this would be the first such infection reported in the country and the second in West Africa.” The highly contagious virus has been named the next big pandemic threat by the WHO. describes him as “prone to epidemics”.

Two unrelated patients from the southern Ashanti region suffered from diarrhea, fever, nausea and vomiting. They both died. Samples taken from two patients by the Noguchi Memorial Institute for Medical Research were positive for Marburg. These samples were sent to the Institut Pasteur in Senegal, a collaborating center of the World Health Organization (WHO), for confirmation.

“WHO guides expertsto support Ghana’s health officials and trace the victims’ close contacts.” Ebola’s deadly cousin Marburg kills between 25% and 90% of everyone who becomes infected.

Infected patients become “ghosts”, their eyes sink deeply and their faces become expressionless. Also, the course of the disease is accompanied by bleeding from the nose, gums, eyes and vagina. The virus is commonly associated with outbreaks in Angola, the Democratic Republic of the Congo, Kenya, South Africa and Uganda.

According to WHO, the virus is carried by fruit bats (those bats again), but can be transmitted between humans through blood and bodily fluids, and by touching contaminated surfaces. Extremely stringent infection control measures are needed to contain the spread of the virus.

It was first detected in humans in 1967 after outbreaks in Marburg and Frankfurt in Germany and in Serbian Belgrade after it was transmitted to laboratory workers by monkeys introduced from Uganda. The disease was discovered for the second time in 2008 in a Dutch woman who returned to the Netherlands from Uganda, where she visited the caves.

The disease begins suddenly, with a high fever and intolerable headache, often leading to severe bleeding within seven days.

There are no vaccines or antivirals approved to treat the virus, so doctors have to rely on intravenous drips to relieve symptoms.

A number of potential therapies, including blood products, immune and drug therapies, are still under development.