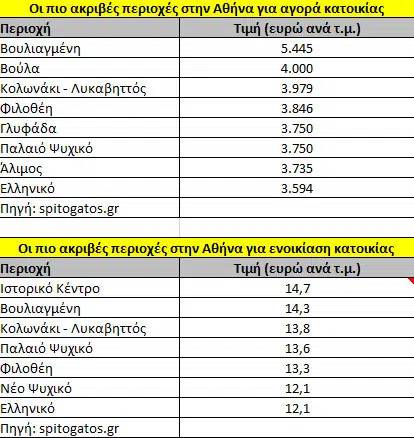 High activity in the Greek real estate market continued in the second quarter. According to experts, prices for secondary real estate in April-June increased by tens of percent, and even more for apartments in new buildings.

Attica has seen the largest increase in rental prices compared to the rest of Greece. The increase in asking prices, both for sale and for rent of houses, is recorded in the second quarter of 2022 compared to last year by the Spitogatos Price Index (SPI), as it looks like the upward trend, which was also observed in the first quarter, continues.

The largest increase in the average asking price of the sale of housing in the second quarter of 2022 compared to the corresponding period of the previous year was observed in Piraeus (11.9%), in the municipality of Thessaloniki (11.7%), in the prefecture of Larissa (11.3%), in the southern suburbs of Athens (10.9%) and Halkidiki (10.8%), the publication reports cathimerini.gr.