According to a well-known Greek seismologist, the lull that has been going on since the beginning of 2022 could result in a dangerous, if not catastrophic, earthquake.

Gerasimos Papadopoulos, director of the seismological research department at the Geodynamic Institute of the Athens National Observatory, said there was “a seismic lull throughout the country”, pointing out that there was not a single earthquake in the country during 2022 greater than 5 on the Richter scale. He recalled that in the previous two years 2020-2021 there were earthquakes of 6 and 7 on the Richter scale, which means: “Now the system is accumulating energy.”

When asked if there had ever been a year with earthquakes measuring no more than 5 on the Richter scale, Mr. Papadopoulos explained: “It always happens like this, recession-aggravation-recession …”.

Seismic calm across the country

During 2022, there was not a single earthquake with a magnitude of more than 5 points. And this is after 6 and 7 point shocks in the last two years 2020-2021… Now the system is accumulating energy!

Meanwhile, in Crete, 8 kilometers from Arkalohorio, on July 14 at 18:36 there was an earthquake with a magnitude of 4.0 (4.1) on the Richter scale. In addition to the main one, in the same area over the past few days there have been about 20 shocks of lesser intensity – from 1 to 3.9 points. 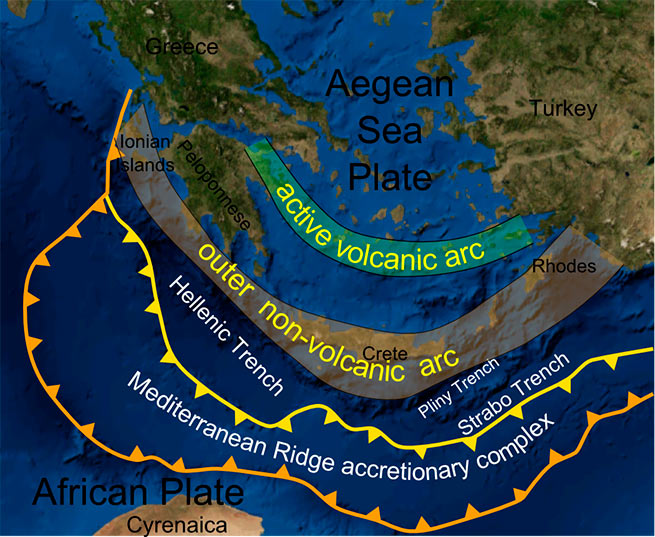 Greece and specifically the “Greek arc” is located in an area that is very vulnerable to seismic activity and has historically always been exposed to underground elements. The first historically recorded earthquake in Rhodes was an earthquake 226 BC. It is known for destroying a large statue of the Colossus of Rhodes. After the earthquake, the statue lay in place for almost eight centuries before it was sold by the invaders. In total, there are 19 active tectonic faults in the Aegean Sea in Greece, which can cause an earthquake with a magnitude of over 7 on the Richter scale.

Directly near Athens (50 km) there are 2 volcanoes, one of them, in Methana, is active. At the same time, in the Saronic Gulf there is a seismically active tectonic fault.