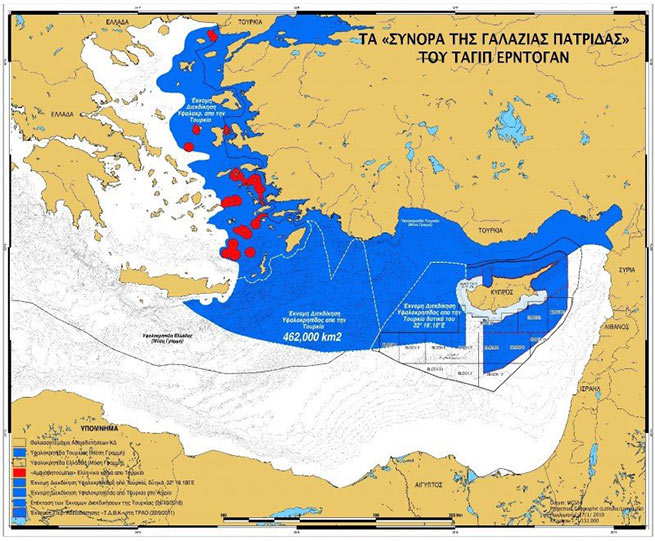 The presentation took place at the headquarters of the nationalist organization “Gray wolves”, the militant wing of Behçeli’s Nationalist Movement Party (MHP). The card was presented to the leader of the party by the president of the Gray Wolves, Ahmet Yigit Yildirim, as a … gift.

On the map, the islands of the North, East and South Aegean, such as Lesbos, Chios, all the Dodecanese, including Rhodes, as well as the entire island of Crete are marked “red”, like the whole of Turkey.

On the map presented by Erdogan, several Greek islands were marked “red”, the sovereignty of which Turkey calls “disputed”. 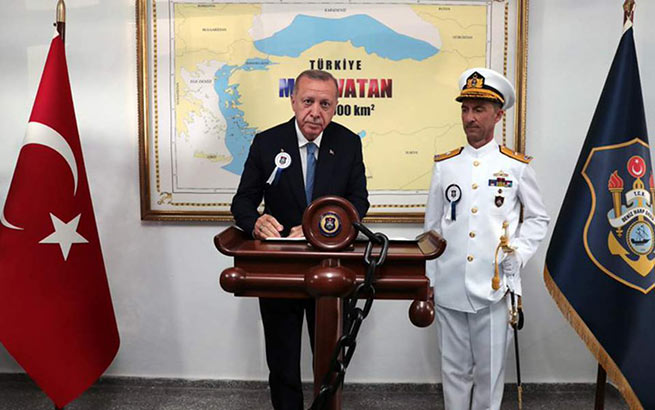 Commenting on the map, Greek diplomatic sources said that “the public presentation of the map by senior officials of the party that is allied with the government in Turkey, on which Greek territory is designated as Turkish, is a particularly aggressive and provocative act, and deserves absolute condemnation.”

“Unfortunately, this is part of the escalation of extreme rhetoric from Turkey that we see on a daily basis. We expect immediate categorical and public disapproval of this unacceptable act of calling into question the territorial sovereignty of our country.” diplomatic sources stressed.

A few hours earlier, Turkish Defense Minister Hulusi Akar issued new threats against Greece, saying that “Ankara has a plan to protect its rights and interests in the Aegean, the Eastern Mediterranean and Cyprus, which it will implement at different stages.”

“We will not allow our rights to be violated, and we will not allow them to be done away with. We repeat it. Our President said this. We are not kidding. Don’t take any adventure like spoiled children relying on others. Come like people, let’s sit down and talk,” Akar said.

Greece’s letter to the UN refuting Turkey’s claims to the Aegean islands, addressed to UN Secretary-General António Guterres, handed over on WednesdayPermanent Representative of Greece to the United Nations. In it, he rejected the allegations contained in a letter sent by Turkey to the same body in September 2021. The May 25, 2022 letter focuses on Turkey’s claims that the refusal to demilitarize the Aegean islands calls into question their sovereignty. The letter rejects Turkey’s claims as legally, historically and factually untenable.

In particular, it rejects Turkey’s argument that Greek sovereignty over the Aegean Islands is in any way linked to a supposed obligation to demilitarize those islands, adding that this link violates both the spirit and the letter of the 1923 Treaty of Lausanne and the 1947 Treaty of Paris (on For some reason, Turkey constantly forgets the presence of the latter, referring only to the treaty of 1923. It is not surprising, then all of Turkey was in the camp of the allies of the Axis countries). 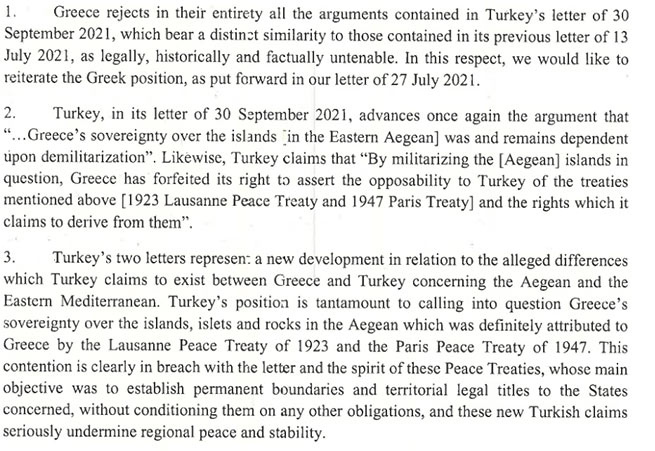 Excerpts from Greece’s letter to the UN:

“Greece completely rejects all the arguments contained in Turkey’s letter of September 30, which bear a clear resemblance to the arguments contained in its previous letter of July 13, 2021, as legally, historically and factually untenable. Any attempt to question Greek sovereignty over these islands on the unfounded assumption that Greece is allegedly violating its obligation to demilitarize them under the aforementioned treaties is contrary to the fundamental principle of international law regarding the stability of frontiers and titles of sovereignty.

All of the above Greek islands are entitled to the territorial sea, exclusive economic zone and continental shelf, in accordance with Article 121(2) UNCLOS. Therefore, since Greek sovereignty over the said islands is legally indisputable, their right to maritime zones and their influence on maritime delimitation have nothing to do with the question of their demilitarization.

Greece remains firmly convinced that the two countries can resolve their outstanding differences, namely the delimitation of their continental shelves and exclusive economic zones, in the spirit of good neighborly relations and in accordance with international law. Greece calls on Turkey to also commit itself to a peaceful settlement of this disagreement.”