Information about the purchase of a batch of 15 Air Tractors fire aircraft caused both joy in the official media and skepticism and criticism in the opposition. What is the problem? Let’s try to figure it out.

Since the summer of this year, a new “tool” has appeared in the “armament” of the fire department of Greece. These are 15 Air Tractors firefighting aircraft (11 amphibious and 4 on wheeled chassis), with which the government, when planning the firefighting season this year, decided to strengthen the fleet of aircraft.

Along with the legendary but rather worn-out Canadair, PZL and helicopters, residents of the areas affected by the flames will see new aircraft that are more maneuverable, fly faster and have a longer flight duration (up to 3.5 hours), can carry up to 3 tons of water. or a special liquid for extinguishing fires.

Thanks to their ability to fly for many hours, air tractors have been used by the Greek fire brigade to patrol, monitor and extinguish fires as early as this year. This happened during the recent fire in Porto Germeno, as well as during the elimination of other fires throughout the country.

The plans of the Ministry of Civil Protection and Crisis Management and the leadership of the Fire Service include the dispersal of these aircraft throughout the country, to provide air cover for all regional units. Thus 6 Air Tractors are based at Tatoi Airport, 3 at Rhodes, 2 at Volos, 2 at Andravida and 2 at Alexandroupoli. It is worth noting that these firefighting aircraft have low operating costs and little need for support. 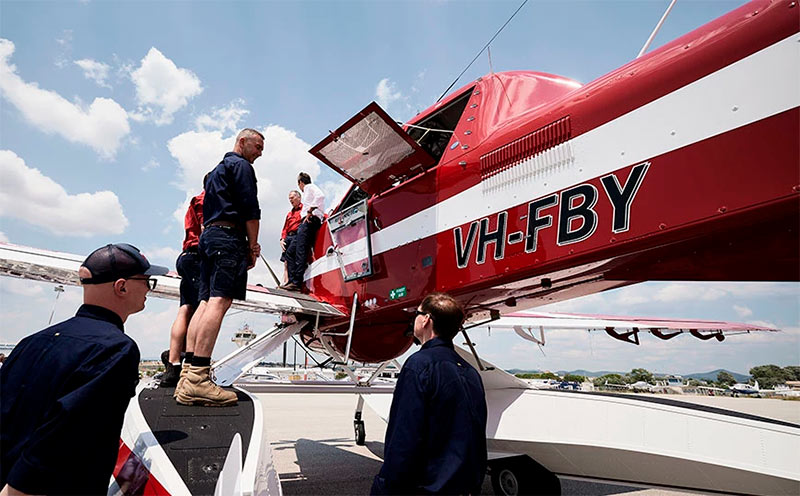 Prime Minister Kyriakos Mitsotakis visited 2 planes at the “Dimokritos” airport in Thrace at noon, after a trip to the Rhodopes and the opening of the IGB gas pipeline. The Prime Minister, who spoke with the Greek and Canadian pilots, stressed in an interview with SKAI yesterday:

“We have done a very honest x-ray of our weaknesses, fundamentally and significantly changed the mechanism for preventing fires in the field and in the area of ​​​​cooperation between the fire and forest services, and in the speed with which we bought more air assets, and in matters of communication that are also important when you manage such natural disasters. We still have a difficult summer ahead of us, but I have a clear conscience that we have done everything possible to protect the country.”

The reaction to such a high-flown speech on the part of the opposition was a tough analysis of the characteristics of the aircraft, where the most characteristic was the phrase: “It can’t even put out the grill.”

“The problem is that planes are not suitable for fighting fires, since they were more likely to … spray fertilizer,” the publication says. Pronews– Since, according to the technical specifications, this model carries much less water than the CL-415 (half), and even more so than aircraft such as the BE-200 or Il-76.

More specifically, Air Tractors carry just 3 tons of water, while the CL-415 can carry over six, the Be-200 (the Russian “beast” that put out fires last year) 12 tons, and the Il-76 over 48 tons. tons! Even the “ancient” PZL can carry 2.2 tons of water or flame retardant foam!

Therefore, the government, instead of looking for real firefighting aircraft, found it right to look for solutions in an aircraft that practically cannot put out even … a grill.

In addition, the aircraft cannot take on water in large waves (in strong winds), unlike the CL-415 or Be-200, which significantly limits its operational flexibility. Since he will have to look for the nearest airport, and this is in the presence of infrastructure for refueling with water or extinguishing agent.

And despite this, the plane is quite “advertised” by the pro-government media, which report that: “Because of their ability to fly for many hours, air tractors are used by the fire department in aerial patrols to monitor and directly extinguish fires.” it probably means that other planes supposedly cannot put out fires immediately?

PS It is strange that K. Mitsotakis did not sit at the helm, climbed onto the wing, there was no need to stop …