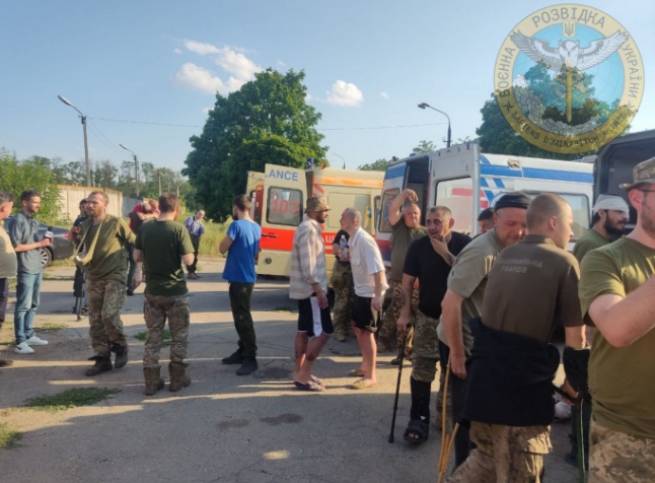 The day before yesterday, the Russian Federation announced that they would not exchange prisoners of war, and yesterday 144 Ukrainian soldiers returned home on a prisoner exchange.

He announced Russia’s intentions, according to the publication. “Fontanka”Alexander Bastrykin, head of the Investigative Committee of the Russian Federation, during the St. Petersburg Youth Legal Forum on June 28:

“We decided not to hand them over, we agreed where it was supposed to. Otherwise, they thought: “we will surrender – and to the families.” No, to temporary detention facilities, to the pre-trial detention center.

Bastrykin said that 2,000 Ukrainian prisoners who surrendered during the special operation arrived “yesterday.” Investigative groups are and will be working with them:

“I thought how else to punish them, now we are spoon-feeding them and treating them. First, we decided not to give them away. Now there are 2,000 such fighters who arrived yesterday. We work with them in detail and thoroughly.

The head of the Investigative Committee of the Russian Federation did not rule out that the Ukrainian military who surrendered would have to compensate for material damage in the cities destroyed during the hostilities, writes “UP”:

“Non-pecuniary damage and civil action. I don’t know how they will compensate, but they must assess not only deaths and injuries, fears, fears, moral damage, but also material damage to Donbass.”

Earlier, on June 22, the head of Ukrainian intelligence, Kirill Budanov, who is in charge of the exchange of Ukrainian defenders from Azovstal, announced that Ukraine hopes to release a “significant number” of Ukrainian prisoners “in the near future.” And so it happened: yesterday Ukraine returned 144 prisoners, of which 95 were defenders of Azovstal. “UP”.

The largest exchange of prisoners since the beginning of the Russian invasion was reported by Main Directorate of Intelligence Ministry of Defense – Ukraine returned 144 soldiers, of which 95 defenders of Azovstal:

“Another exchange of prisoners was carried out, thanks to which 144 Ukrainian defenders returned home. This is the largest exchange since the beginning of a full-scale Russian invasion. Of the 144 released, 95 defenders of Azovstal. Among them – 43 servicemen of the Azov regiment.” Total released: 59 National Guard soldiers; 30 – Naval Forces; 28 – Armed Forces of Ukraine; 17 – State Border Guard Service of Ukraine; 9 – Territorial Defense; 1 – National Police of Ukraine. Of these, 23 officers and 69 military sergeants and petty officers. The eldest of those released was 65 years old, the youngest was 19.

The GUR notes that the majority of those released have severe injuries: gunshot and shrapnel wounds, burns, explosive injuries, fractures and amputations of limbs. All returnees receive emergency medical and psychological assistance.

The defenders of Mariupol, who were taken out of the territory of Azovstal in May, are in a colony in the Donetsk region. Sources of the publication claimed that 2,449 Ukrainian servicemen were in Olenivka as prisoners of war. The exit of the defenders of Mariupol to the territory controlled by the Russians took place on May 16-20. According to the Russian side, 2,439 fighters came out of the Azovstal underground. Representatives of the “Red Cross” registered Ukrainian defenders as prisoners of war.

On June 19, Russian media reported that the commanders of the Azov regiment were taken to Russia for “investigative actions.” Denis Prokopenko, commander of the Azov National Guard Regiment, handed over his duties to Major Nikita Nadtochiy.