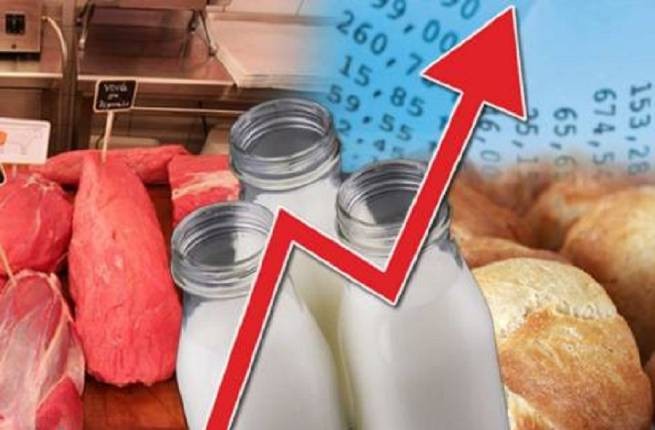 It is reported that the largest increase in prices was recorded for flour, sunflower oil, pasta, as well as some other categories of essential goods. In several Greek retail chains, restrictions were placed on the amount of goods sold per person, such as flour, sugar, sunflower oil, and pasta.

Most food supply companies have gone through two rounds of revaluation since the beginning of the year, the third is expected in September, and at the beginning of July, wholesale suppliers have already announced a 10% increase in prices for some food categories.

What awaits us in the near future

In particular, with regard to food products, it should be recalled that the growth on an annualized basis in May was 12.1%, and on a monthly basis – 1.6%. The latest data from supermarkets, compiled by market research firm IRI, shows that in the week ending June 12, prices for standard products rose 8% year-on-year, with dairy products the largest increase (11%).

Indicative of the vertical rise in prices over the past four months are the data of the e-Consumer price observatory platform of the Ministry of Development and Investment. The value of a typical “basket” increased by about 6% over this period, with the largest gains recorded for toilet paper (35.49%), flour (31.25%), spaghetti (27.38%), sunflower oil ( 23.20%). ). Very important, since they burden the family budget almost daily, is the increase in the prices of milk and dairy products in general, eggs, cold cuts, vegetables and fruits and, of course, bread (an increase in toast by 13.84%, while the price of fresh bread also very high).

It is noted that the data refer to average prices for products of specific brands.

Given that fuel and electricity prices remain at very high levels, and various subsidies cover only a fraction of the increase in production costs, price reductions are not expected in the near future. The estimated average national price for unleaded petrol on Monday June 27 was €2.40/liter compared to €1.64/liter on June 27, 2021.

The new conditions that have developed on the market in recent months bring new, or rather restore data from the past in relations between suppliers and retailers. Some of the latter are currently asking suppliers for additional incentives, either by paying in cash or by providing deliveries equal to 3%-5% of the turnover that the supplier makes annually in the chain, to cope with increased demand and supermarket operating costs.