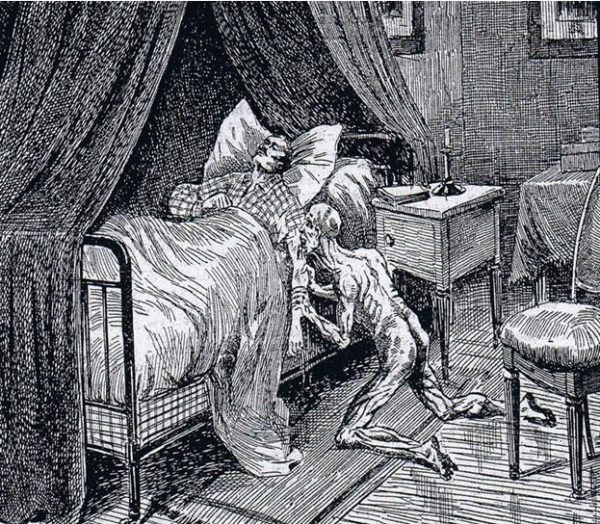 Each region of Greece has its own stories of the dead rising from their graves at night and tormenting the living. But what happened in Mykonos in 1700 is unprecedented.

The entire island was subjected to massive backlash and hysteria because it was believed that the vampire came out at night, harming unsuspecting residents.

The French traveler Joseph Piton de Tournefort, who went to the Cyclades to write a book about the life and inhabitants of these places, wrote this incident in his diary. The book was written and was called Journey to the East.

Tournefort told a story that happened before his eyes when he was in Mykonos for several days. In his diary, he writes: “I witnessed a very paradoxical scene in Mykonos, connected with the return to the world of the dead of a ghoul who had risen from the ashes.”

There was a villager on Mykonos who didn’t have the best relationship with the rest of the world. He was always “to blame for everything”, because he did not care about anything or anyone at all. One day the unfortunate man was found dead under a tree in a field in the countryside. Tournefort continues: “Two days after the burial of his remains, a rumor spread in the cemetery that many inhabitants had seen him wandering through the villages at night.” More and more people began to spread rumors that at night they saw how he walked through the streets, entered houses, terrorized people, overturned furniture, threw dishes on the floor and committed other outrages.

At first, the people of Mykonos laughed at everything they heard, but when various prominent and reliable inhabitants of the island also said that they had seen it with their own eyes, things took a serious turn. The inhabitants of the island panicked. More and more people gathered in the church. And all of them vying with each other asked the priest to perform an exorcism in order to neutralize the vampire.

However, the next day, more and more houses were damaged, the residents were in fear and panic. With each passing day, horror began to nest in the minds of the inhabitants of Mykonos. In addition to the monks and priests, the people of Mykonos also organized patrols. Groups of people with torches in their hands, with crosses, sticks and swords, wandered the streets all night in search of a vampire.

Tournefort reported: “As a result, a council of elders of the island was convened, at which the priests were also present.” Therefore, it was decided to wait 9 nights from the date of the burial of the villager. On the tenth day, a service was performed at the cemetery, after which the villagers went to the grave of the “restless spirit”, opened it and dug up the body, setting it to fire. On the shore of the island, a thistle fire was built and the remains were thrown into it.

People waited until the body burned completely. “I was present at this terrible scene,” the traveler wrote and continued, “it was New Year 1701, when the ashes of the Mykonian vampire were scattered over the sea. Only then did people return to their homes.”