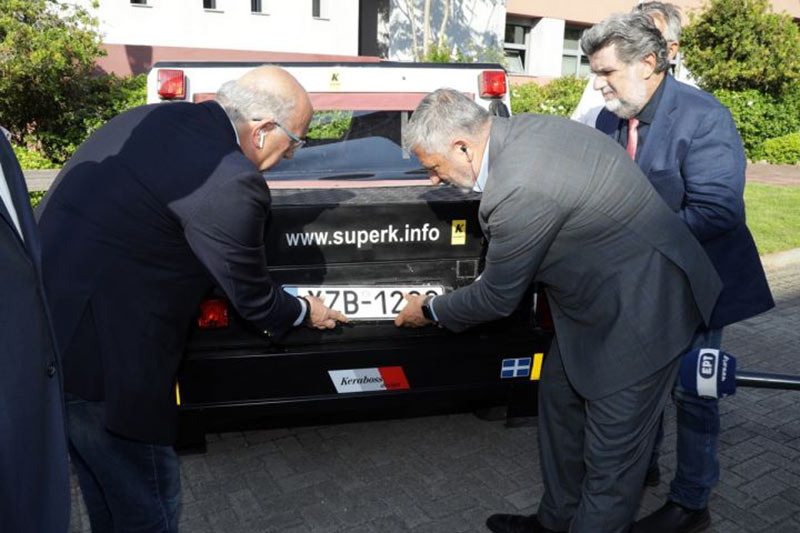 Many years later, the Keraboss Super K, produced in Greece, received the appropriate approvals and a traffic license.

This is a car that belongs to the category of “individual special assembly” (M.O.I.K.), special category of vehicles.

Although it is not a production car and does not look very modern, it is the first car in the last 50 years made in Greece, approved and certified by the Greek state for road traffic.

This model was officially presented to the Greek public at the premises of a company founded by Pavlos Kerampos, which has been engaged in the conversion of cars and vehicles since 1975. It is a car with off-road characteristics, known as the M. OIK car (Individual Vehicles of Special Design), which classifies it as a special vehicle category with more flexible safety, emissions, etc. claims than production vehicles.

At the event, the capital’s officials were notably promoted. More on this in a note.

“The way has been opened for the first certified Greek car,” Deputy Transport and Infrastructure Minister Michalis Papadopoulos said at the event. It is worth noting that Keraboss Super K received license plates after the coordinated actions of the relevant ministry and the region.

In his speech, the Deputy Minister did not fail to send an open invitation to Greeks abroad who are active in the automotive industry to return to Greece and do business, as the Ministry has created a legal framework for such initiatives. “We support such initiatives and will be on the side of any efforts,” he said.

For his part, the governor of Attica, Georgios Patoulis, noted that today (Tuesday 06/21/2022) is the result of cooperation between the region and the competent ministry. “Today, after many years, the Greek car received license plates, as now all the tools have been created in the region so that the citizen does not suffer either in terms of license plates or driving licenses,” said Mr. Patoulis.

Symbolic screwing of the license plate

As for the technical features of the Keraboss Super K, we first of all note that, according to its creator, it will be offered in a two- or four-seater version. It weighs 540 kg and is powered by a 1000 cc Mitsubishi naturally aspirated engine.3 and a power of 72 hp, which is combined with an automatic transmission. Its external dimensions are 3375 mm long, 1560 mm wide and 1590 mm high.

The structure is entirely handmade, with a polyester body “attached” to a galvanized chassis. To create them, KERABOSS CARS MANUFACTURING cooperates with many specialized Greek workshops. As for the price, although not officially announced, it is expected to be just over 20,000 euros excluding VAT.

The next goal of the manufacturer is to be able to join the development program so that the company has access to funds that will be directed to the further development of its cars, and be able to reduce the high costs associated with their construction. In any case, as emphasized at the event, the company’s goal is to sell more than 70 cars a year, mainly on the islands and specifically in car rental companies.

One can only applaud the perseverance and perseverance of Pavlos Kerabis, who was able to break through the wall of bureaucracy.

Editorial note. This, of course, is great that, as they say, “the ice has broken.” But after all, even 40-50 years ago, more than 15 brands of cars were mass-produced in Greece, which at the same time were much more affordable than this, so to speak, homemade product for 20 thousand euros. At the same time, only a rather clumsily assembled body is purely Greek in this car. However, according to experts, this is a reason to give others the opportunity to start assembling cars. Well, or at least start a screwdriver assembly of Chinese electric vehicles, which was quite difficult under the previous laws.

PS And the minister, by any chance, was not ashamed of his office, which for 14 years had been issuing permission to operate a car? Isn’t it by chance?