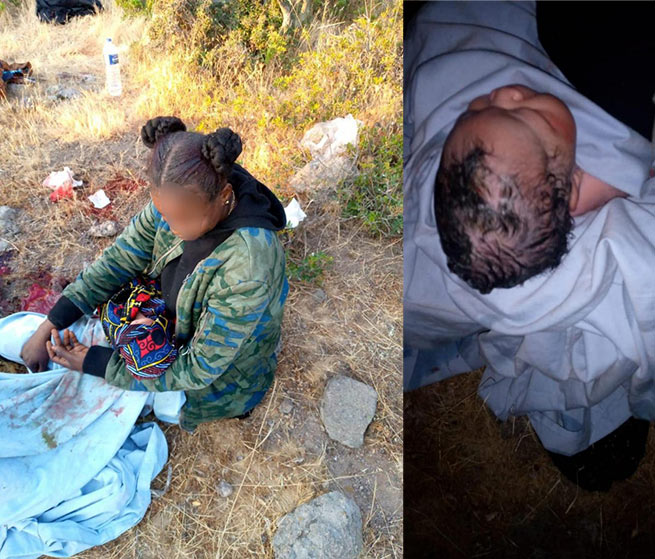 A migrant woman gave birth to her baby immediately after she arrived with other migrants on the island of Barbalias, northeast of the island of Lesvos, on Wednesday. The mother and newborn are healthy and are in a hospital in Mytilene.

A newborn boy, only a few hours old, should he be the youngest asylum seeker in Greece or will he be another migrant facing deportation?

The mother was in a “semi-conscious” state when the Greek Coast Guard reached the island, the port authorities said in a statement. The Greek Coast Guard launched a rescue operation early Wednesday morning after a patrol boat found 30 migrants stranded on the island. The remains of an inflatable boat, on which illegal immigrants arrived, were found off the coast of the island, the port authorities said.

The statement said that none of the 25 men and 5 women, most of whom are believed to be Eritrean nationals, were wearing a life jacket. “A woman among foreigners was conscious, along with her newborn boy, who was born on the island,” the port authority noted, adding that the Coast Guard provided first aid to both.

All migrants were transferred to the port of Mytilini, where an ambulance was waiting for the mother and the newborn. They were immediately taken to a local hospital. The Ministry of Shipping later tweeted:

“Congratulations to the Coast Guard officers who rescued a mother and her baby, born on a rocky island, abandoned by ruthless human traffickers. The mother and child are now safe in the Mytilene hospital. We save lives in the Aegean“.

In the past few days, Greece has seen an increase in migratory flow with boats full of people arriving from Turkey fleeing war and adversity or pursuing their dreams of a better life. However, not everyone, regardless of age, is lucky enough to reach solid ground and be safe. Eight people, including three children, are missing. after a shipwreck off the coast of Mykonos on the night from Saturday to Sunday.