War is ruthless to everyone and to each individual. Among hundreds of thousands of tragic stories, this one takes its special place.

Alexander Lukashov – master of the Mariupol metallurgical plant. During the hostilities, a civilian in a seaside town lost an eye, and his face is crossed by two huge scars. But… he survived. And he got his wife out of the rubble already dead. Alexander left his native city along a road strewn with corpses. His path lay through Russia to his daughter in Greece. The man shared his story with “UP”.

Photo “UP”. Before the war.

On that day, February 24, no one in Mariupol could even imagine how Putin’s “special operation” would turn out. Alexander, as usual, went to work. But just a few days later, on February 27-28, the shelling of the city began. Shells also flew into the area of ​​the private sector, where the Lukashov family lived. The increased shelling forced the spouses to move to the house of Alexander’s mother, where they went, taking only documents with them. The head of the family recalls:

“On March 2, we went shopping. Everything was still working. There was silence in the city. However, neither the police nor the Ukrainian military were anywhere to be seen.”

But the next day remained in the memory of the man forever. In the morning, his wife called him to the window: “Look, the tanks are coming! And look what is painted on them!” Alexander saw several tanks and armored personnel carriers with painted white letters Z. The spouses were not particularly frightened, rather worried, but moved away from the window – the wife went to the kitchen, he remained in the room, and the mother went to open the door in response to a knock. 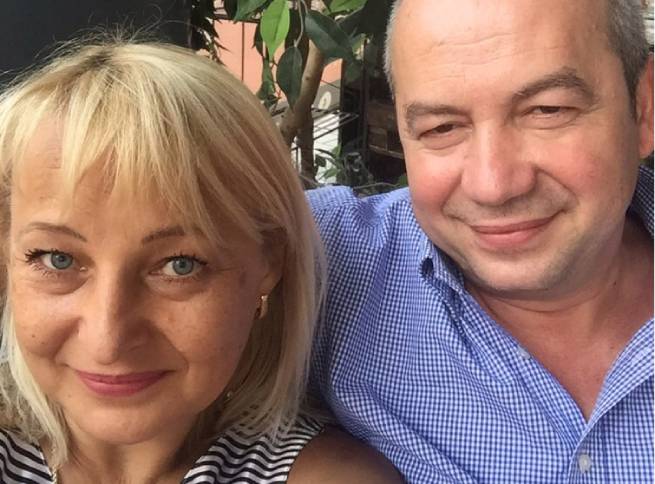 Photo UP. Alexander Lukashov with his wife.

“Suddenly I heard the sound of a tank diesel engine. Then – how the tank turret turns, how the mechanics work. I realized that he stopped near our house.”

He didn’t hear the shot, but he felt the impact. Shards of window panes hit him in the face and damaged his eyes. There was no longer a wall between the kitchen and the room, between the corridor and the room, too. Memories are given to Alexander hard:

“My first thought was: where is Olga? She ended up in the kitchen under the rubble. Only her head was free. I sorted through the rubble and shouted: Olya, help yourself with your hands and feet! “dead eyes. Then I had this look for a long time. When I dragged her, she was already dead. I checked her pulse. And I noticed how her nails began to turn blue.”

Two men who came running to his scream, in jackets with the inscription “Medicine of Disasters”, began to pull Alexander through the window, and then – a memory failure, he lost consciousness. He came to himself in a local hospital, where his wounds were sewn up. There he learned of his mother’s death. 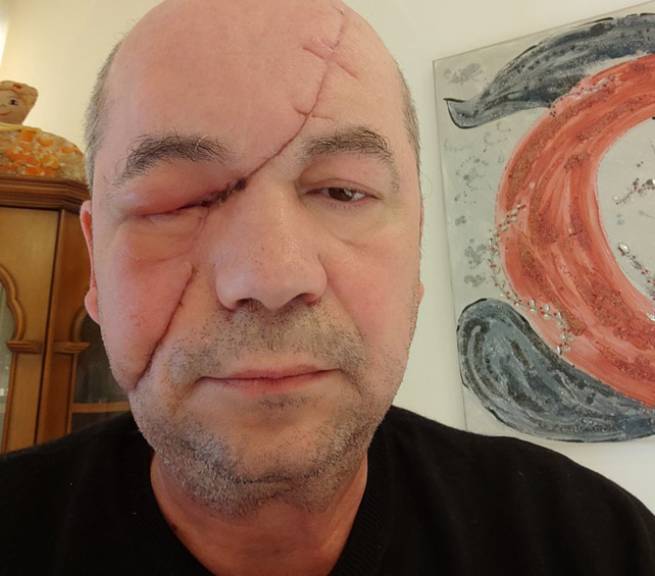 Photo UP. This is what Alexander looks like now.

The situation in the city worsened, shelling became more frequent, Mariupol was constantly bombed, and more and more people were brought to the hospital. Doctors released Alexander only on March 21. Together with one familiar family with two children, the man decided to get out to the territory controlled by Ukraine – nothing else kept him in Mariupol. According to rumors, it was possible to get to Berdyansk, and then to Zaporozhye. They traveled to the western part of the city for a week, waiting for the bombing in the basements. Mariupol says:

“The military from” Azov “say that somewhere around 20-25 thousand people died in Mariupol. It seems to me that more. We walked over the corpses. They were everywhere! left.”

Finally, on March 27, Alexander and his family with children reached the local church, where there was a huge basement, in which about 200 people who wanted to leave the city hid from shelling. However, the invaders announced: “None of you will go to Ukraine, there is only one option – where we will say.” So Alexander ended up in Donetsk. He was hospitalized in a local hospital, where he lay in the same room with the wounded “DNR”. Talking about himself, the Mariupol resident tried to defend his position, told who killed his family. But I heard back:

“Shut up, otherwise you will find yourself in the basement, and tomorrow they will take you out to the landing, shoot you and no one will look for you.”

The “DPR” turned out to be ordinary residents of Donetsk, detained in a transport or a store and mobilized. They said they didn’t want this war. They also wanted to mobilize Alexander, despite the lack of an eye. Like, pump up tires, repair cars. It was saved by the fact that at that moment he had not yet passed the so-called filtration. Alexander says:

“They came to a representative of the regional department, the FSB, the investigative committee. They forced me to undress, looked for tattoos, asked who I was. Wasn’t I a military man? And so for a whole month.”

In Donetsk, a man managed to contact his daughter, who lives in Greece. He told her that he could no longer remain in this “Gestapo”. The daughter found a driver who can take her from Donetsk through Russia to Latvia, and from there you can get to Athens. But to leave Donetsk, it was necessary to go through a humiliating “filtering”, without which no driver would be lucky anywhere.

Filtration cost Mariupol 3.5 thousand rubles – the problem of the queue, scheduled for 2 months in advance, was solved with the help of the local “Ministry of Emergency Situations”. For those who don’t know how the filtering goes (Alexander had a few more ahead of them): fingerprints, checking the phone, full-face and profile photos, lengthy questions about work and acquaintances, undressing to check for tattoos. Alexander says:

“They believe that the Ukrainian military is all in tattoos, in fascist signs. I was lucky, I don’t have a single tattoo. And a young man of 25 years old went through the filtration with me. He had a tattoo: a hieroglyph and flowers. He sat there for a long time. I gone and left him.”

Then he traveled across Russia in a bus to get to Greece. The check was waiting for him at the border between the “DPR” and the Russian Federation, and then at the Russian border point, carried out by the FSB:

“Fingerprints again, they strip naked again and look at phones. But I was surprised that they had all the data on people from my work. Someone leaked the database to them.”

The road through Russia took three days. Impressions remained the most negative. The last FSB check was at the exit from the Russian Federation, on the border with Latvia. When the man was given a piece of paper about permission to leave Russia, he felt alive for the first time since the beginning of the war. Then – Latvia, Poland, and Alexander flew to Greece through Sicily, through the window from the plane he saw the sea and islands.

Three hours later, in Athens, he was met by his daughter. And it was a return to life. While Alexander needs to continue treatment, however, he is already thinking about how to find a job…