Districts Petralona and Nea Figalia municipality Zacharos in Elijah were literally occupied by myriads caterpillars. Residents, mostly farmers, are in a panic as insect pests literally devour their property.

The biggest the threatin their opinion, for animalsbecause the caterpillars are poisonous. Pets get sick if they accidentally eat them. “Now our goats have nothing to eat. We are waiting for the authorities to pay attention to our misfortune and carefully study situation‘ said the locals. patrisnews.com.

The Olympia Forest Service states that “this phenomenon is gaining momentum, but it is temporary, it will make its cycle and end soon, so there should not be much concern.” Every five to ten years, around this period, there is an outbreak of caterpillar reproduction due to climatic conditions.

Their optimism is not shared not only by the inhabitants of Ilia, but also by many other regions of Greece. In particular, hundreds of hectares of forests, already drastically reduced from the fires of 2021, have become victims of the marching silkworm. Forest technicians know many methods to combat them, both with the help of pesticides and with the help of biological and mechanical means. But money is not allocated for this, like, it will pass by itself … Yeah, but along with the forests …

Hairy scourge: walking silkworms are a health hazard. DW
On each such caterpillar, there are about six hundred thousand small burning hairs from 0.1 to 0.2 millimeters – in addition to those long ones that are visible to the naked eye.

Upon contact or contact with the skin, mucous membranes, eyes or respiratory tract of a person, they can cause various inflammations and even life-threatening reactions – redness of the skin similar to nettle burns and severe itching, conjunctivitis, asthma attacks, in rare cases – suffocation and anaphylactic shock.

Moreover, the hairs continue to pose a threat even after the appearance of butterflies – they are carried by the wind from the spider web nests remaining on oak trees. Even with not very strong gusts of wind – within a radius of up to hundreds of meters. 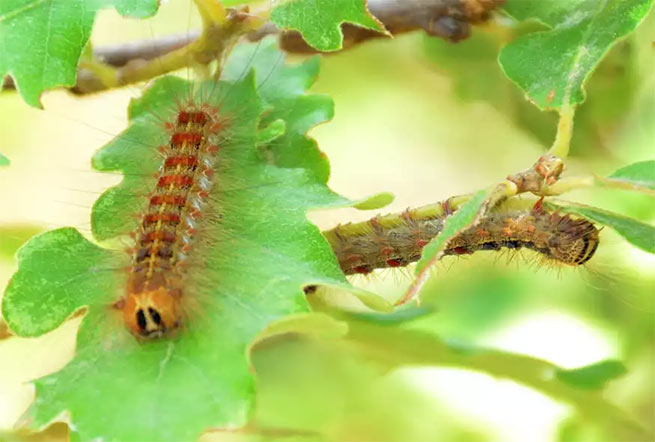 In Germany, we are talking about the caterpillars of the oak silkworm (German: Eichenprozessionsspinner or Eichen-Prozessionsspinner) – one of the types of marching silkworms, the population of which has been growing rapidly here for many years in a row. Now they are found in all federal states. According to the dpa agency, the reason for this is the warming of the earth’s climate, which led to the creation of favorable conditions for their reproduction in the local latitudes – very mild winters combined with warm and dry spring periods. In addition, the trees themselves, due to repeated droughts, have become easier prey for this kind of pests.

Migrating to new feeding places, marching silkworm caterpillars gather in long columns or processions, which is reflected in the names of these butterflies. Around the world there are about a hundred species – oak, pine (they, in particular, are found in Russia), pistachio. The names and types are different, but the problems bring similar ones.

When individual trees or areas are found where the oak marching silkworm has spread, local authorities in Germany mark such places with special signs or fence off with tape – they are similar to red and white police tapes, but they repeat the inscription “Eichenprozessionsspinner”. You need to stay away from such places. 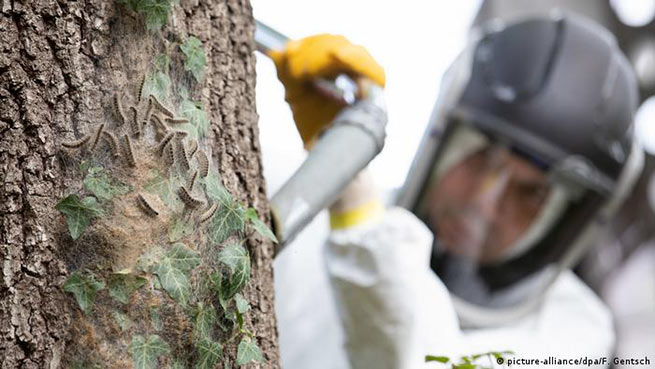 Hiking silkworms – how to deal with them?
If caterpillars have appeared on trees near schools, residential buildings, in city parks or other crowded places, experts are called in to fight, for example, with special industrial vacuum cleaners. They themselves work in protective clothing. Collected caterpillars are sent to incinerators or buried in the ground.

Young caterpillars before the appearance of hairs can be destroyed by applying chemicals that block the shedding of the chitinous cover. In some places, with the help of helicopters, they began to spray a liquid with special bacteria – Bacillus thuringiensis – over the trees. They are safe for humans, but caterpillars die from them by eating sprayed oak leaves.

Natural helpers in the fight against this problem are some species of birds, for example, tits, to attract which they hang birdhouses. They eat caterpillars, but only up to the stage of hairs. After the onset of this stage, the caterpillars remain only in the diet of cuckoos. In turn, bats feed on oak silkworm moths, which also helps to reduce the population.

What to do and when to seek medical help
In case of contact, you should take a shower and wash your hair thoroughly, and wash your clothes in a typewriter. Inflamed areas of the skin are recommended to be cooled with compresses. Antiallergic medications, as well as hormonal ointments and topical corticosteroids, can alleviate symptoms. In the event of a severe reaction, medical attention should be sought immediately.

PS In Germany, apparently, they better understand the danger of these insects or just worry more about their forests…