“Did he allow American bases in Greece? Allowed. We had an agreement with Greece, I told my foreign minister about it yesterday. We terminated the Supreme Cooperation Council Agreement with Greece. We are for a worthy foreign policy,” the Turkish president said, speaking to the parliamentary group of his party.

“You go and show how your planes take off … What are you doing? Don’t you learn any lessons from history? And after that you start crying and whining,” Erdogan continued.

“Don’t try to dance with Turkey. You will get tired and stay on the road,” he stressed and added: “We no longer have bilateral negotiations with them. Unfortunately, this Greece will not take the right path. This is the Greek Cypriot lobby in the US and they are against us in Congress. We are already tired of them. If you are honest, your position is honest with us, if not, then do not understand me correctly.

Last week Tayyip Erdogan declaredthat Greek Prime Minister Kyriakos Mitsotakis is for him “no longer exists”accusing him of trying to block the sale of F-16 fighter jets to Turkey during his recent visit to the US.

Erdogan on Hagia Sophia: “We closed the wound”

The Turkish President also mentioned the Hagia Sophia, which is one of the main areas of escalation of challenges posed by Turkey in recent days.

“We returned Hagia Sophia to its original form after 84 years and, thank God, closed the wound that tormented our heart. Hagia Sophia has once again taken its place in our culture as a raising flag in the heart of Istanbul,” the Turkish President said in his speech to the parliamentary group.

Earlier Sunday, the Turkish Defense Ministry addressed the issue in a series of posts accusing Athens of “expansionist aspirations” over a post by Nikos Dendias commemorating the anniversary of the fall of Constantinople.

“The fact that those who allegedly mourned Hagia Sophia did not oppose the demolition of mosques in Greece dating back to 1500, each of which is a cultural heritage, and turning them into cinemas, exhibition spaces, living quarters and warehouses, are hypocrites,” said the Turkish Ministry of Defense.

“The Greek administration, which does not even give a burial place to Muslims when they die, is trying to deceive its own people with gross illusions and cover up its dead-end realities. The sun cannot be covered with mud,” the Turkish Defense Ministry added.

Cavusoglu’s insistence on the demilitarization of 16 islands

Ankara again raised the tone in Greek-Turkish yesterday, Tuesday, when Mevlut Cavusoglu showed maps and islands, the sovereignty of which Turkey denies. The Turkish Foreign Minister demanded the withdrawal of Greek troops from 16 islands, from Samothrace to Kastelorizo. 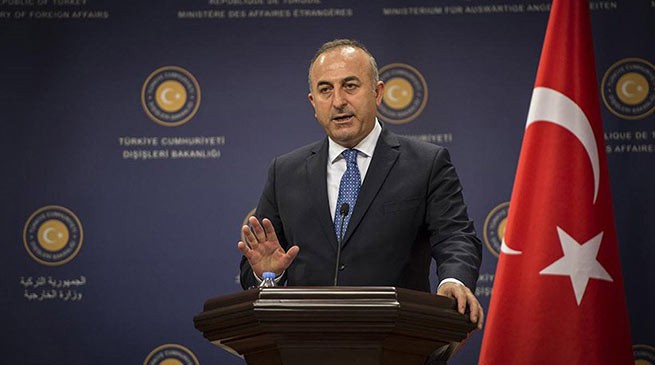 In an interview with the state agency Anadoli, he stressed that “these islands cannot be considered in isolation from the security of the Dardanelles and Istanbul.” Mr. Cavusoglu, referring to two letters that Turkey sent to the UN regarding the status of the Greek islands, stated that “these islands were granted to Greece in accordance with the Treaty of Lausanne in 1923 and the Treaty of Paris in 1947. Both treaties have a condition: Greece will not militarize these islands. She will not place weapons. Greece changed the status of these islands. Therefore, she must withdraw her weapons from these islands. “Otherwise, the sovereignty debate will start.” Then Mr. Cavusoglu noted that “Greece is the country that pursued an expansionist policy. This humiliates the issue of the status of the islands, violates it. This is clear from international law. The agreements are clear enough. Therefore, we say that if Greece does not back down from these violations, we will question the sovereignty of the islands. This is very clear in our letter.”

Mr. Cavusoglu announced that by the decision of Tayyip Erdogan, Ankara is terminating the process of the Supreme Cooperation Council between Greece and Turkey and stressed that this decision was taken because Athens is trying to prevent the supply of various weapons systems that Turkey wants to buy. “That is, we will talk about cooperation at a high level, and on the other hand, we will lie and slander Turkey on every platform, and the weapons that Turkey wants to buy. We have never done anything like this until today. You are going to press in Congress or somewhere else against this (Turkey). Now how will it be done?” asked the Turkish Foreign Minister.

Kyriakos Mitsotakis showed the Blue Home map to German Chancellor Olaf Scholz during yesterday’s morning meeting on the sidelines of the summit EU. The Prime Minister, according to government sources, briefed Mr. Scholz in detail on Turkey’s violations of Greek airspace and Ankara’s aggressive rhetoric. The two leaders also discussed supporting Ukraine in the face of the Russian invasion and energy crisis.

Meanwhile, Emmanuel Macron made a sharp statement about the departure of the Greek-Turkish summit. “The Greek Prime Minister strongly expressed Greece’s concerns – its legitimate concerns – and condemned the statements of some Turkish officials that question the sovereignty of Greece on many of its islands. I want to express the support of all Europeans, especially France. Today, no one can question the sovereignty of any EU member state. These statements must be condemned as soon as possible, and that is what I am doing here in front of you.”

Mitsotakis: Any attempt to violate sovereignty will be punished

Prime Minister Kyriakos Mitsotakis sent a second stern message to Turkey, speaking at the European People’s Party (EPP) congress in Rotterdam, which he attended directly from Brussels. During the debate on “Unity of Solidarity: Defense of Western Democracy” at the 27th Congress of the European People’s Party, referring to the Turkish provocation, the Prime Minister stressed that “any attempt to violate our national sovereignty will be severely punished.”

In fact, in response to provocative statements, made Tayyip Erdogan at the celebrations for the fall of Constantinople, Mr. Mitsotakis declared that our country will not tolerate “any new version of historical revision based on fantasies of lost empires,” adding, “An attempt to violate sovereignty will be severely punished.” Elsewhere in his speech, speaking of Turkey and referring to Ukraine, he used the phrase: “Whoever thinks that the borders are being redrawn with the use of force will receive an adequate response.”