A five-year-old girl was rescued at the last moment when she started to drown after falling off the pier into the water. The incident occurred in the port of Piraeus, while the girl’s mother did not even notice the loss of the child.

The tragedy was avoided only because the captain of the ferry, preparing to moor in the country’s largest port, saw how the girl struggled to stay afloat.

“She was drowning 60 meters from the ship, all I could see was her hands,” Apostolos Lazaridis, captain of the Agios Nektarios ferry, told ANT1 on Thursday.

The captain immediately informed the port authorities. By the time the coast guard arrived, police officer Yiannis Stathopoulos had jumped into the sea and retrieved the child, who had already sunk. 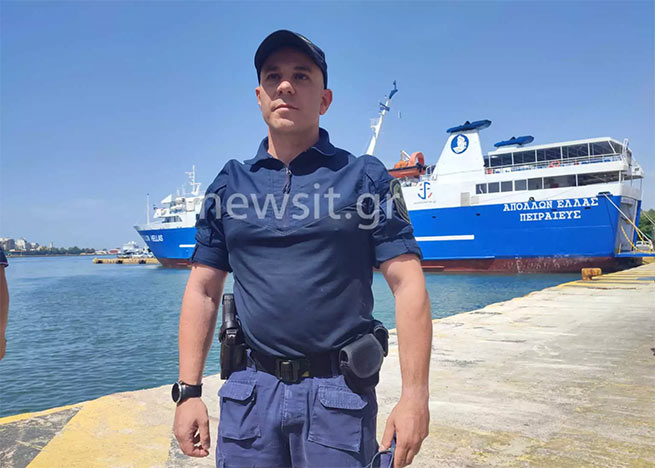 She was taken by ambulance first to the Nikiya General Hospital and then to the Agia Sophia Children’s Hospital in Athens, where she remains in the intensive care unit for the time being.

“I was going to jump into the sea to help the child, but the policeman reacted faster,” the captain said. He added that the baby was very close to the pier, “but she was small, she couldn’t swim.”

The incident happened around 4 p.m. Wednesday. The circumstances under which the girl fell into the sea remain unclear. She was walking behind her mother, the father told the media, who said he had left for coffee. He claimed that the girl was playing, and her legs got tangled in the cables on the pier, because of which she fell into the water (I wonder how he knew this? And if he found out, why didn’t he save his child? Approx. Editorial).

The Piraeus Port Authority arrested the 37-year-old mother at the scene and brought her to the prosecutor’s office on charges of negligence that endangered the life of a minor. 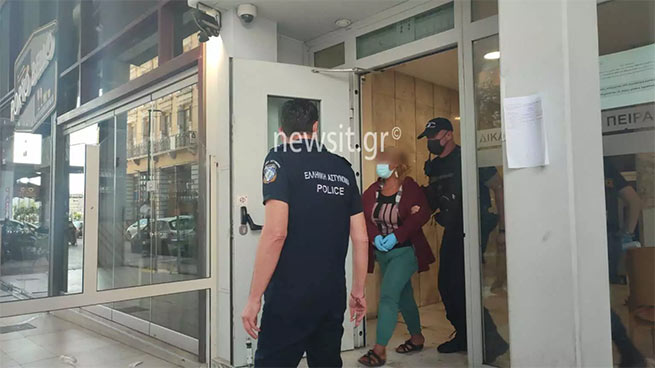 On Thursday afternoon, the court sentenced her to 12 months in prison, suspended for 3 years. According to newsit.grshe will serve one month in Korydallos prison in Athens.

The parents claimed that they were homeless people who spent time in the port with their children. The media suspect that this family is begging, and the little girl was near the pier, waiting for the ferry passengers to disembark. The father denied allegations that the girl was begging for money from passengers, but they do not believe him. 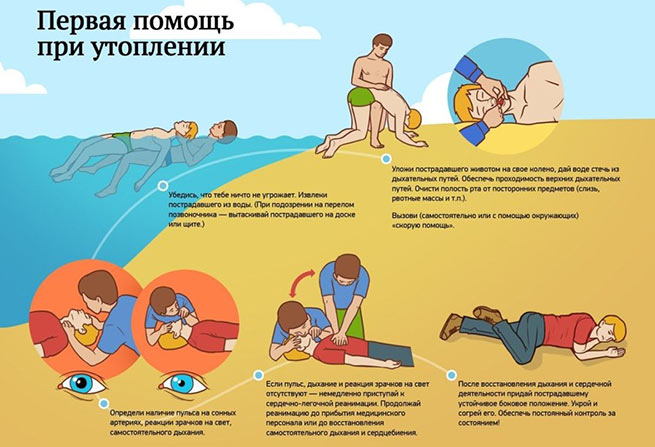 If a person is drowning before your eyes?

See if there is a life preserver nearby. It can be anything that will increase the buoyancy of a person, and that you are able to throw it to him.

Encourage the victim by shouting that you are going to help. When approaching, try to calm and encourage the exhausted swimmer. If this is successful and he can control his actions, the swimmer should hold on to the shoulders of the rescuer. If not, it must be dealt with harshly and unceremoniously. You can even stun a drowning person to save your life and his life.

Having swum up to a drowning man, it is necessary to dive under him and, taking from behind one of the capture methods (classic – by the hair), transport him to the shore. If the drowning man managed to grab your arms, neck or legs, free yourself and dive immediately – the instinct of self-preservation will make the victim let you go.

If a person plunged into the water, do not give up trying to find him in the depths, and then bring him back to life. This can be done if the drowned person has been in the water for about 6 minutes.

Having pulled ashore, examine the victim: the mouth and nose may be clogged with mud or sand, they must be cleaned immediately. Then turn the victim on his stomach so that his head is below the level of his pelvis (the child can be put on his hip with his stomach), and sharply press on the root of the tongue to provoke a gag reflex and stimulate breathing. If there are no vomiting and coughing, put the victim on his back and proceed to resuscitation:

• kneel to the left, tilt the drowned person’s head as far as possible (this is very important!) and, having shifted the jaw down, open his mouth;

• take a deep breath, put your lips to the victim’s lips and inhale the air with force, the victim’s nostrils should be clamped with your hand;

• if the victim’s heart is not beating, artificial respiration should be combined with chest compressions. To do this, place your palm across the lower part of the sternum (but not the ribs!), The other palm – on top of the first crosswise. Press on the sternum with your wrists so that it bends 3-5 cm, and release. Through each inhalation, do 4-5 rhythmic pressures;

• if there are signs of life, turn the victim face down and remove water from the lungs and stomach;

• if two people help, then one does artificial respiration, the other – a heart massage. Do not stop resuscitation until the ambulance arrives;

• do not leave the victim alone and do not transport him on your own, call an ambulance.

If possible, immediately call 112 (or ask someone) and report what happened.

There are 3 drowning mechanisms. The most common is “true” drowning (80-70% of cases). Drowning people are usually in a state of strong physical excitement, trying to stay on the water, which depletes the body’s oxygen resources. Increased shallow breathing during diving leads to hypoxia and hypocapnia, as a result of which blood flow in the vessels of the brain decreases. Having lost consciousness, the victim plunges into the water. There is a delay in breathing, and carbon dioxide quickly accumulates in the body. The accumulated carbon dioxide stimulates the respiratory center, and the victim takes deep breaths under water, during which water enters the lungs, flooding them. With each breath, water displaces the remaining air from the lungs.

Clinically, true drowning is manifested by “violet-blue” cyanosis, the discharge of white or blood-colored foam from the mouth and nose. Consciousness is restored slowly, as brain hypoxia is aggravated by rapidly growing edema. On the x-ray, rare shadows of irregular shape are visible. According to the analyzes, a pronounced metabolic acidosis is recorded.

In a drowned person, water does not always fill the bronchi and lungs. So, if drowning was preceded by CNS inhibition under the influence of alcohol, fright, trauma to the skull, then the victim quickly loses consciousness and plunges under water. At the same time, there are no deep breaths under water, due to the inhibition of the activity of the respiratory center. In response to the entry of the first portion of water into the respiratory tract, reflex laryngospasm and closure of the glottis occur. Water in large quantities is swallowed into the stomach, but no longer enters the lungs. This type of drowning is called asphyxial, as the access of air to the lungs is stopped.

Asphyxic type of drowning occurs in 10-15% of cases. Clinical signs of true and asphyxial drowning (cyanosis of the skin, “fluffy” foam from the mouth and nose) are almost the same, which does not allow differentiating these types of drowning during the period of clinical death.

In 10-15% of cases, a syncopal type of drowning is observed. In this form, an instant reflex cardiac arrest occurs when a person is immersed in water. Syncopal drowning usually occurs in women and children. The reasons for it may be fear, falling into cold water, a strong emotional shock. This type of drowning is characterized by pallor of the skin (due to severe peripheral spasm) and the absence of foamy fluid from the mouth and nose.

There are some differences between drowning in salt water and fresh water. Due to the difference in osmotic pressure, fresh water containing a smaller amount of salts enters the blood from the alveoli. This leads to hypervolemia, a decrease in the concentration of salts in the plasma, hemolysis of erythrocytes and, ultimately, ventricular fibrillation. With true drowning in sea water containing 4% salt, plasma sweats into the alveoli, i.e., pulmonary edema occurs. The mechanism of cessation of blood circulation in this case will be asystole.

However, regardless of the composition of the water (fresh or salty), its aspiration leads to damage to the lung epithelium, the destruction of surfactant, the development of intrapulmonary shunting and arterial hypoxemia. For prognosis and treatment, the duration of anoxia and the degree of lung damage, rather than the composition of the water, are of fundamental importance.

A drowned person does not always immediately go into cardiac arrest. When removed from the water, he may retain weak cardiac activity, which does not require an external heart massage. Therefore, the main resuscitation measures will be to eliminate hypoxia, i.e., to conduct mechanical ventilation.

The chances of success in resuscitation increase significantly if mechanical ventilation is started afloat (immediately after removing the victim from the water). Of course, only good swimmers can do this.

Afloat, it is more convenient to carry out mechanical ventilation by the mouth-to-nose method. The rescuer puts his right hand under the right hand of the victim, rests his palm on the chin and throws back his head, and closes his mouth with his fingers. Turning the victim’s head, the rescuer blows air into the nose. Carrying out an external heart massage in water, of course, is impossible.

On the shore, one should not spend a lot of time trying to remove water from the lungs, especially since it is almost impossible to completely empty the airways. It is recommended to quickly put the victim face down and vigorously squeeze his chest with his hands several times, then turn him on his back and start resuscitation. If the physical capabilities of the rescuer do not allow this technique to be carried out at a fast pace, then it should be abandoned. In this case, it is only necessary to free the oral cavity from foreign bodies, the upper respiratory tract from water (raise the pelvis) and immediately begin mechanical ventilation. If there is no heartbeat, start an external cardiac massage. If possible, switch to mechanical ventilation with 100% oxygen using positive expiratory pressure as soon as possible. Subsequently, oxygen is supplied.

With true drowning, resuscitation will be successful if the stay under water does not exceed 3-6 minutes. With asphyxia and syncopal drowning, these periods are extended to 10-12 minutes. When drowning in cold water, the protective effect of hypothermia is manifested, and revival is possible even after 20 minutes of being under water. From 5 to 20% of those revived subsequently have neurological pathology of varying degrees.

No matter how quickly breathing, blood circulation and consciousness are restored, such a patient should be hospitalized without fail. Late complications from the lungs (secondary drowning syndrome) are quite common. This syndrome is manifested by chest pains, increased dyspnea, ECG signs of myocardial hypoxia, cough, hemoptysis, radiologically large uneven darkening in the lungs. Such patients are shown prolonged mechanical ventilation with an exhalation pressure of 50-80 mm of water. Art. And the later the patient is transferred to mechanical ventilation, the worse the prognosis. Naturally, this syndrome can be diagnosed and treated in time only in a hospital setting.