Athens property owners listing properties on the Airbnb platform can earn almost €95,000 a year, almost €14,300 more than in London.

In fact, if someone buys an apartment in Athens for 82,000 euros, it will take the owner a little over a year to recoup the money given for the purchase. In recent years, there has been an influx of travelers staying at Airbnb’s listings. The site currently lists over six million rooms, apartments and homes in 81,000 cities around the world. dikaiologitika.gr.

Where can you make the most money? A new study by CIA Landlord Insurance reveals the average cost of living (Airbnb) worldwide, in cities and near famous landmarks, and the cost of buying a property to reveal most profitable cities for homeowners. Airbnb listings near Burj Khalifa make the most money

Over the past 40 years, Dubai has become a city of skyscrapers and many flock here for city breaks and summer vacations. But How much money can landlords earn here? Owners of real estate located next to the Burj Khalifa, the tallest building in the world, earn the most. dubai, with an average cost of £930 per night, is the most expensive Airbnb property in the world.

This means property owners can earn £6.6510 if guests stay for eg 7 nights. However, this is only an advantageous area for those who have properties near the Burj Khalifa, as homeowners who have properties located in the distance can rent them out for as little as £181 (per night).

New York is the second highest priced listing on the Airbnb platform. Houses and apartments that are near Central Park can be rented for $7,767 (per night).

However, homeowners can still make money if they have a property further afield, as the current price is $4,534 per night. It makes New York as a whole the best value for Airbnb listings.

While landlords can clearly make money buying property in these places, where in the world would it take them less time to get their money back?

The table below shows the cities with the largest difference in Airbnb accommodation prices near an attraction compared to the city:

Owners of real estate located next to the Burj Khalifa can “recapture” (return) the money in just four months. Dubai rental property owners not only have the most money to make, but they need the least amount of time to recoup their investment.

With an average city apartment purchase price of £112,624, homeowners must host an average of 121 nights to earn back their investment.

This, however, excludes any costs or expenses for furnishing the property, so owners must account for this in the total cost.

The second most profitable place for homeowners is Hilo, Hawaii. where it only takes 200 nights for homeowners to get their money back. With the average cost of buying an apartment here also double that of Dubai, at £1.51,300, it’s a safer investment for those just starting their Airbnb business.

The table below shows the cities where it will take homeowners the least amount of time to save money if they own an Airbnb property: 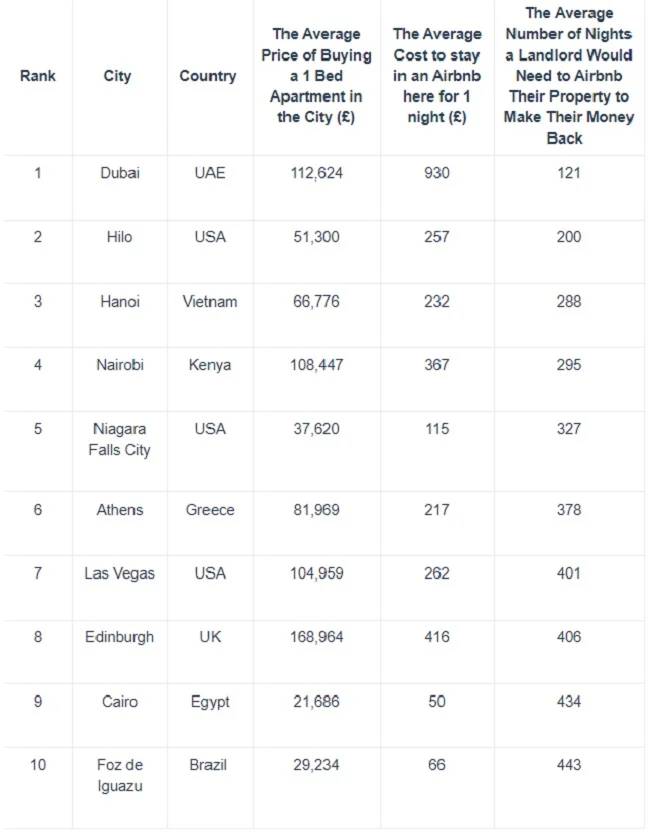 While there are many places in the world where owners can make a quick buck, Cuzco in Peru extremely disadvantageous for Airbnb owners. It would have taken the owner over 13 years (4,810 nights) to earn his money here, even though a paying customer lived in the property every night. This is 3875% more than Dubai and is mainly due to the extremely low cost of living on Airbnbs.

London ranks fourth in the ranking of the least profitable. Airbnb rental property owners can expect over five and a half years (2,803 nights) of investment to pay off. When buying a one-bedroom apartment, for an average of £5,524,088, homeowners will have to wait longer (or rent out for more) to get their money back.

Which cities in the world are in demand and have the most travelers? 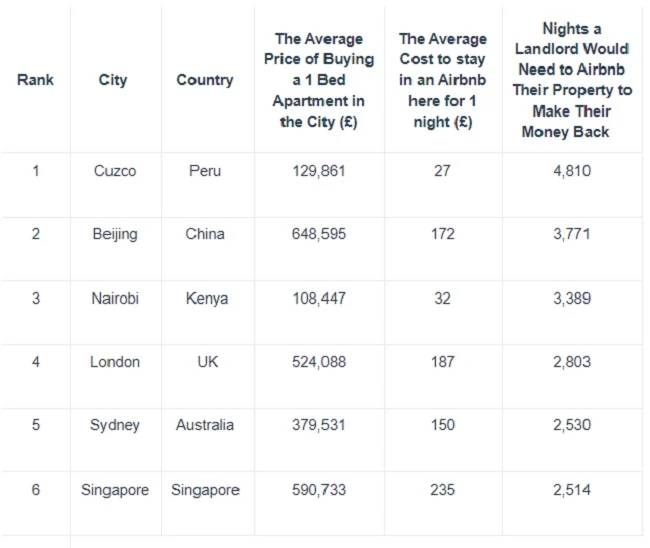