When the doors of the White House opened Monday night and US President Joe Biden greeted Greek Prime Minister Kyriakos Mitsotakis, many were surprised to see Biden wearing a tie emblazoned with Greek flags.

A very symbolic gesture and PR appropriate… The story of how Joe Biden acquired certain connections goes back to 2017 when he visited Athens as Vice President. 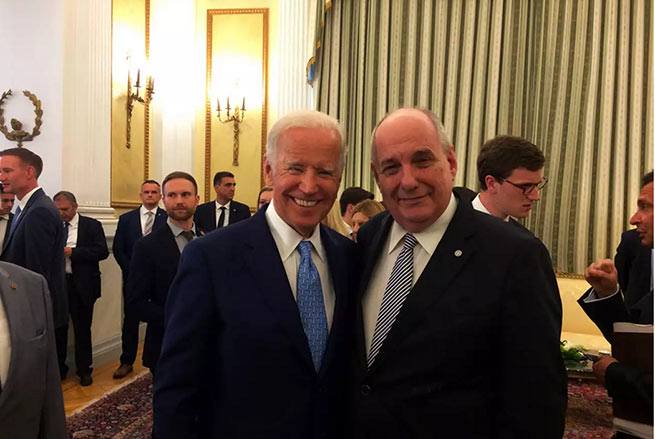 On the sidelines of Concordia’s first European conference in the Greek capital, Biden met with the Greek Undersecretary of State in the left-wing/Nationalist SYRIZA-ANEL coalition government, Terence Quick.

They apparently exchanged admiration for each other’s ties, and at one point Biden asked Quick, “Are you changing your tie for mine?” They hit on the hands. Quick agreed, and the two men posed for pictures in each other’s ties.

They also kept the exchanged ties, which is why Biden, wearing Quick’s tie, showed up at a meeting with Kyriakos Mitsotakis on Monday.

On the occasion of the meeting at the White House, Terence Quick remembered the exchange and uploaded this commemorative photo.