The research director of the Greek Institute for Security and Defense Analysis (IAAA / ISDA) expressed deep concern about the war in Ukraine, believing that it opened a direct path to a nuclear catastrophe.

Those who are truly aware of the situation created by the war in Ukraine are deeply concerned about the recent spiral of uncontrolled escalation. This can bring humanity to the brink of disaster. If there is one key takeaway that simultaneously reinforces this concern, it is that the West across the Atlantic lacks this historical leadership conjuncture, such as those who managed, albeit with great luck, to maintain the “balance of terror ‘ during the Cold War.

Zacharias Mijas – director of research at the Hellenic Institute for Security and Defense Analysis IAAA / ISDA.

The US has demonstrated for years that it has never been able to abandon the logic of conflict with Russia. For “cynical” international security analysts, this was almost expected, since the reality imposed by global geography pushes in this direction, although the possibility new security architecture in Europewhich would include Russia, did exist.

One would expect that the lessons learned from the disclosure of the archives of the Soviet secret services during the Cold War, were fully assimilated by the West. He had to realize the role of the luck factor that nuclear arsenals did not bring the end of humanity, at least in the form in which we know it today.

Washington and Moscow then had different attitudes towards nuclear energy. While both feared the destructive power of strategic arsenals, they saw the equation differently. The West did not realize that the Soviets in their dogmas and business plans believed that if it came to the use of nuclear weapons, they would be able to win, or to be more precise, to hold out longer.

It also turned out that the Western “nuclear deterrence” debate, although of excellent quality at the level of “civilian strategists,” could never understand the Soviet point of view.

On the contrary, from the moment it publicly developed and influenced the formation of nuclear doctrines, it gave the Soviets an advantage. The USSR knew much more about American doctrine than the Americans did about Soviet doctrine. This allowed Moscow to plan surprises for the Western camp in the event of a nuclear war, which were considered unthinkable in the West. At the same time, always based on what the records showed, It was easier for the Soviets to push the button….

The instability in the world today is huge, and in many ways this is due to the technological progress of the West in weapons technology. But not in those that are associated with mass destruction, that is, at the strategic level. Fresh example – hypersonic weapons.

Today it is generally accepted that Russia and China should be technologically ahead of the Americans. How reasonable uncontrolled pressure on Russia on the Ukrainian front, where Washington doesn’t seem interested in a ceasefire? It’s probably the other way around.

Perhaps this should have already been put on the table, how rational would be, for example, the US decision to withdraw in 2002 from the 1972 agreement banning the development of defensive weapons in outer space (the ABM Treaty). Because the rejection of this convention led to polyphony.

Given the situation in Ukraine, with Vladimir Putin preparing, according to the news, to warn the West”about the fate of the world”, everything begins and reminds that during the Cold War the strategic debate was called window of vulnerability. It is precisely because of the belief that the United States will overcome the distance – only a matter of time, Isn’t this “window” slightly opened today, it’s dangerous and directly threatening the immense West? 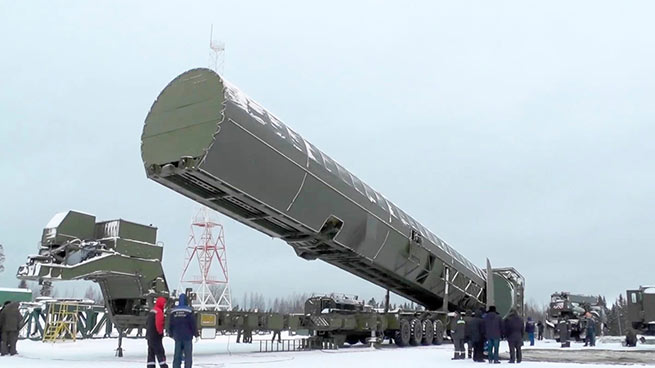 It’s amazing that these thoughts don’t seem to count Western military headquarters. XAlthough there is recent evidence thatUS Strategic Command concerned about the imbalance. And this applies not only to Russia, but also to China, which is following the development of events with particular interest, apparently in order to to take into account the lessons in their own strategy (for example, the Taiwanese front).

So this is what we will see in front of us in any case, even if the war in Ukraine ends one way or another. The window of strategic vulnerability will open to the West more and more, the closer it brings Russia to an economic catastrophe with “dollar arming” and massive economic sanctions. Hence the attempts of the West to internally destabilize Russia.

And these are modern “nuclear” weapons (financial sanctions), however, if they are not used wisely and not ensure an honest way out of the enemy from the conflict, will have consequences. This is another rule of strategy that is being flagrantly violated today. In the long term, slowly but gradually, this will undermine the role of the dollar in the world.

Indeed, outside the American and European continents, it is difficult to find countries that have adopted the Western position “what is good and what is bad”, and their own understanding of what is black and what is white. More than half of the world is not following Washington’s orders. If the US thinks that they will gradually build a world that will accept the American monarchy, then they are making a colossal mistake, which is also driving the US towards destruction at full speed.

It is this choice that leads mankind to the hegemonic conflicts known for centuries, to the “politics of power”, the parameter of which is clearly economic power. But when the imbalance in the technological, economic and, ultimately, conventional military realm escalates, unfortunately, the only level at which the enemy can balance is with nuclear weapons.

In the US, however, President Joe Biden does not seem to have a very strong grip on the helm of his nation. This contributes to the uncontrolled deployment of the agenda of the Democratic wing, which seems ready to go. to an unacceptably high, to the point of absurdity, risk of achieving ideological goalsespecially when no American blood is shed. So at least they believe.

At the same time, European leaders are simply watching and agreeing in a panic with Washington’s decisions. The ideologies of many decades and the devaluation of military power are stuck in military oblivion EU, and even more so prevented him from obtaining strategic autonomy from the United States. This situation has escalated infecting society with utopian theories from the well-fed and prosperous European intelligentsia, not excluding the Greek.

Forecasts are not optimistic. Theoretically, there would be a way out of the impasse. This may be a theoretical construct, but let’s ask ourselves a question: what if there was a US-led leadership that really cares about world balance, that respects Russia’s legitimate national interests and is respected in the Kremlin?

What if such a leadership proposes a complete restart of Western Russian relations with a truce and a full restoration of the situation until 2014, while launching a strategic dialogue to find a new balance in Europe? Will there be an interlocutor for the West in Moscow? As said from the very beginning, this is a theoretical construct, food for thought.