It’s been several years since the French magazine Elle paid tribute to Ukrainian Victoria Zaveryukha, introducing her as Joan of Arc from Ukraine.

When it turned out that the woman was a Nazi and called for the massacre of Orthodox Christians and Jews in Ukraine, the magazine apologized, saying that during the interview she did not make such an impression!

Recently, this woman reappeared as a “front-line Amazon”, and the video with her participation was widely shown in all international networks.

Blown up russian equipment, fire, Ukrainian troops after fierce battle,… and in walks a Ukrainian girl with a Kalashnikov, no helmet, no bullet proof vest, sunglasses, who is fighting with the battalion.pic.twitter.com/XV8P3bZF8Y

Roller called many comments social media users who noticed that, “despite the destruction and shelling after a fierce battle … and for a walk, a Ukrainian woman with a Kalashnikov assault rifle, without a helmet, without a bulletproof vest, wearing sunglasses.”

Blown up russian equipment, fire, Ukrainian troops after fierce battle,… and in walks a Ukrainian girl with a Kalashnikov, no helmet, no bullet proof vest, sunglasses, who is fighting with the battalion.pic.twitter.com/XV8P3bZF8Y

Someone compared her to Bin Laden.

Other commentators, on the contrary, admired the “heroine”.

“The behavior of her and her colleagues may explain what caused the war in Ukraine”according to the authors of the Greek edition newsbreak.gr. “Considering the facts thatwhen this woman is accused of murder, as well as of blowing up an Orthodox church with a rocket on which she wrote “death to the Orthodox”, no one can claim that she does not understand what has been happening all these years in eastern Ukraine“, emphasize the Greek journalists.

The authors of the publication also write: “MWe condemn Russia’s invasion of Ukraine, war crimes, killings of civilians. But the massacre of Ukrainians in eastern Ukraine by neo-Nazi gangs, now portrayed as freedom fighters, we also condemn. Just like the Islamist terrorists in Syria and Libya, whom the Western media presented as fighters for democracy, until they began to behead Americans“. 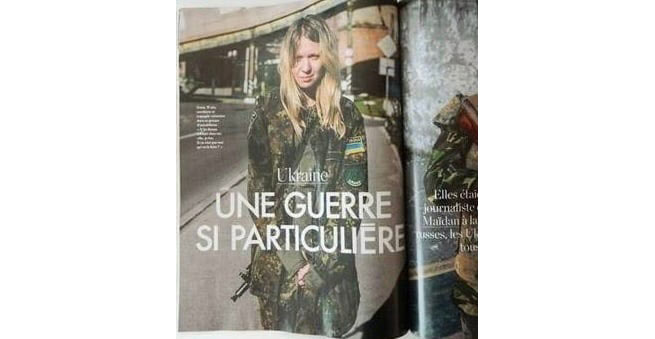 Participated in the conflict in the east of Ukraine on the side of the Armed Forces of Ukraine since May 2014, as well as in the attack on the opponents of Euromaidan in the Odessa House of Trade Unions on May 2, 2014, being an activist of the Right Sector. She is widely known for her open sympathy for radical nationalist ideas, calls for the destruction of Russian-speaking citizens of Ukraine. The fact of the shelling of the village of Shirokino by Zaverukha from a hand-held anti-tank grenade launcher was filmed and published on the Internet. 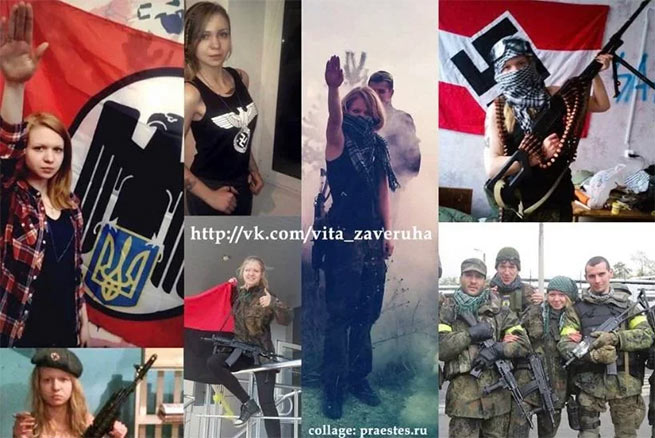 On May 4, 2015, she was detained in Kyiv on charges of shooting traffic police inspectors at the Bykovnya checkpoint in 2014, robbing a gas station in the Desnyansky district of Kyiv on the night of May 3-4, 2015 with the attempt and murder of police officers, planning a terrorist attack on May 1, 2015 of the year. The case of Vita Zaverukha received a significant response due to the severity of the accusation and the openly radical position of the accused.

She became widely known after the publication on November 14, 2014 in the Elle France magazine of a report about women in the armed conflict in the Donbass, in which Victoria Zaveruha was called the “Ukrainian Joan of Arc”. The publication in the magazine caused a scandal in the media and the Internet after the response messages of the American pianist, originally from Kyiv, Valentina Lisitsa. She, in her messages on the Internet, drew attention to the fact that Victoria Zaveruha, in her messages and photos on the network, demonstrated open sympathy for radical nationalism and supported the destruction of Russian-speaking citizens of Ukraine. In one of the photographs published on the Internet, Zaveruha raises his hand in a Nazi salute; on the other, she is depicted in a military uniform, holding a grenade launcher in her hands, on which “Death to the Orthodox” is written with a felt-tip pen; on the third, against the background of the building of the Lugansk TPP, unfolds a red-black flag; on the fourth, he poses with weapons against the background of a flag with a swastika.

After the intervention of Valentina Lisitsa, the editors of the French magazine Elle apologized for publishing a report about Victoria Zaverukha and other women participating in hostilities in the Donbass.