The 28-year-old girl was looking for work on social networks, ignoring the warnings of friends and acquaintances. Somehow, she fell into the clutches of ruthless pimps, who kidnapped her and forced her to serve 30 clients every day for two whole years.

The young woman was convinced by the promises of her Albanian peer, with whom she communicated online. He promised her a job as a waitress in Athens to help her get out of the difficult financial situation in which she found herself. However, the “employer” took advantage of her vulnerable position and dragged her into an apartment, where he locked her up with two of his accomplices, a 40-year-old compatriot and a 61-year-old Greek.

The unfortunate woman was in the hands of criminals for almost two years, until one of her escape attempts failed. The fugitive contacted a non-governmental organization dealing with cases of abuse of women, which informed the police about the victim of sexual exploitation.

Even experienced police officers were shocked by how the girl described the unthinkable horror that she experienced at the hands of her pimps. They illegally kept her in a brothel and turned her into a “sex slave”, forcing her to date dozens of men every day.

The pimps took away her personal documents and identity card so that she could not escape. For each date, the pimps received ten euros from the “clients”, without giving the girl a penny, and whenever she objected, the 28-year-old Albanian even beat her with chains.

The same house on Metaxourgio, where a 28-year-old woman was held for 2 years.

According to an investigation launched immediately by the Attica Security Organized Crime and Human Trafficking Subdivision police, the apartment in the Metaxourgio area, where the pimps illegally held their victim, was rented by two Albanians. At the same time, one of them denies that he knows about what happened to her.

Three men were arrested, during a police search, they found and confiscated: a firearm, an air pistol, several rounds of ammunition, 420 euros and a fake ID of one of the Albanians. 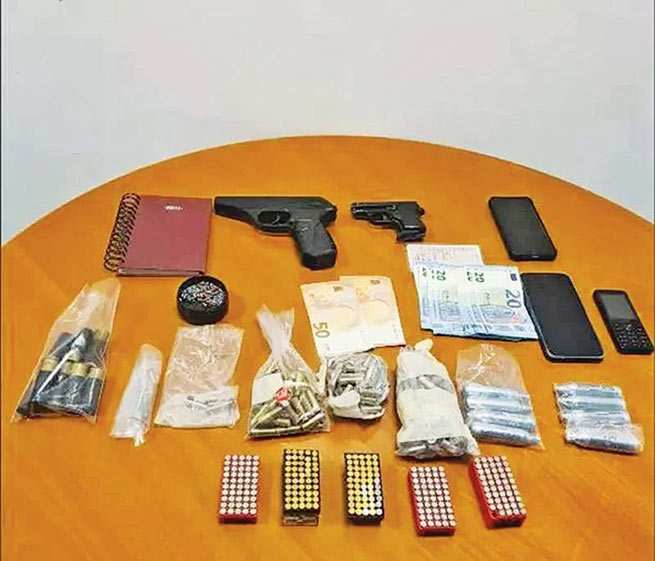 Then they were taken to the Athenian prosecutor’s office, which charged them with human trafficking, forgery of documents, violation of the law on weapons.

A background check on three pimps found the 28-year-old Albanian to be a longtime “client” EL.AS., as he previously had a criminal record for participating in a gang of robbers in Piraeus. In addition, in 2020, he was involved in a shootout in a market in Piraeus. The incident occurred during his meeting with a man involved in racketeering. It is known that in the process of communication they quarreled, as a result of which the Albanian began shooting, seriously injuring the interlocutor.

He was charged with attempted murder and gun violations. But he was tried in absentia, as he managed to hide and move freely under false names. After being handed over to the prosecutor’s office, along with two other detainees, he is to be brought before the prosecutor for the execution of sentences, as an arrest warrant was pending against him on the basis of a guilty verdict for attempted murder, according to which he was sentenced in absentia to 10 years’ imprisonment.