Interesting conclusions about the ideological positions of the Greeks are provided by the study “ΔιαΝΕΟσις”, conducted by the Marc company in the period from January 26 to February 5 of this year. In part “B” of the survey, participants were asked to rate eight terms that describe different ideological attitudes.

“Bad” rated capitalism the majority of respondents, also expressing their negative opinion about neoliberalism and communism.
Most Greeks treat two of them well: 53.2% consider socialism “good”, as well as liberalism – 52%.

On all other ideological lines, most Greeks are negative. In particular, 47.6% have a negative attitude towards “neoliberalism”, and 69.8% towards communism. The majority of those polled, 53.5%, consider capitalism “bad”, while 31.8% consider it “good”.

As noted in the diANEOsis study, there have been some historical changes in the past seven years: in 2015, 52.5% of Greeks had a positive view of the “left”, while in 2022 this percentage fell and now stands at about 32%.

Most simply vote in elections or feel close to the party without active support.

In particular, the respondents describe their attitude to politics as follows: “I just vote in elections” – 43.4%, “I feel close to the party without actively supporting it” – 35.3%.

The following three answers have single-digit percentages: “I actively support the party (I defend its position, go to rallies if possible, etc.)” was answered by 7.5%; with 5.6% claiming to be a “party member”; and 5.8% answered “no” (not interested at all / I don’t vote)”, writes in.gr. 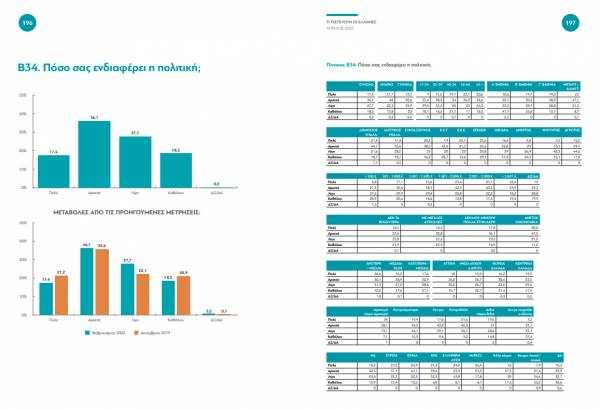