Recent studies by biologists and botanists highlight the need for protective measures for Greece’s wildlife as the country’s biodiversity is under threat.

Not that it’s a secret, but Greece is indeed a biodiversity paradise, and thanks to the systematic efforts of individual scientists and scientific organizations, this paradise continues to bring new surprises.

Scientists are constantly discovering new endemic species and data about a country’s flora and fauna, constantly adding new pieces to the giant jigsaw of ecological interactions that we know to be a natural process.

The results of three such research projects were recently presented to the Parliamentary Committee on Environmental Protection.

The first concerns a 40-year study of pollinators, hard-working workers so essential to natural processes. As a result, it was discovered that more than 1200 species of wild bees live in Greece: only on the island of Lesbos, in the eastern part of the Aegean, there are more of them than in all of Germany.

The second is the LIFE program, which began in 2014 and aims to study 10 species of bats and other cave dwellers. His results are also impressive, as the researchers discovered new populations of bats they knew nothing about before, as well as highlighting the important contribution to biodiversity of small caves that may be home to rare endemic species.

The subject of the third project is an innovative program concerning the reintroduction of beavers, which disappeared from Greece at least a century ago, as a means of strengthening ecosystems.

The notable progress represented by these three biodiversity protection projects in Greece is overshadowed, however, by another instance of typical delays.

Despite the fact that the country managed to get approval for a 100 million euro project under the European Union Recovery Fund for the Study and Protection of Biodiversity, and the deadline required by the fund is strict, the Ministry of the Environment has already wasted eight months. The preparation of the project confirms the general lack of interest in issues related to the natural environment.

Researchers at the University of the Aegean have recorded over 1,200 species of wild bees in Greece – a staggering number compared to a single species used in beekeeping. And the more they learn about pollinators and their relationship to plants, the more light they shed on the fascinating world of complex interactions and their invaluable ecosystem contribution to nature’s conservation.

Theodora Petanidou, professor of ecology and ecogeography at the university, has been working in this field for 40 years, and for the last 20 years she has been the coordinator of the laboratory of biogeography and ecology at the University of the Aegean. “We are trying to understand not so much the biology of pollinators as their ecology. Their relation to flowering plants. Who goes with what, how climate dependent they are, what their biogeography is, what threats they face,” she explains.

Years of research by Petanidou and the laboratory have resulted in the registration of 1,200 species of wild bees in Greece, far more than in much larger Mediterranean countries such as Italy and Spain. Only on the island of Lesvos in the eastern Aegean, they found 650 species, while in Germany there are 600.

“Among other things, we studied the impact of grazing and forest fires. And they came to the conclusion that grazing and fire of medium intensity bring the greatest benefit to biodiversity. We also studied the impact of beekeeping on the ecosystems of the Aegean and the Cyclades in particular, and found that excessive beekeeping is harmful to wild bees. Because wild bees do everything themselves: they don’t have prefabricated hives and colonies with pre-assigned roles, so normal bees tend to dominate the field,” Petanidou explains.

One of the problems that has attracted much attention of scientists in recent years is climate change. “Bees love warmth, so the increase in temperature does not adversely affect them. But rising temperatures affect plants that produce less nectar and bloom earlier, which means that it will affect the time of interaction with insects,” Petanidou says. “Our data show that by 2080, 60% of the Aegean bees will be extinct,” she warns.

Return of the beaver, a century later?

This stuffed beaver, exhibited at the University of Athens, was made by French scientists in Messolonghi in the late 19th century.

Reintroducing any species back into the area from which it has disappeared is always an extremely difficult task requiring planning, careful study and attention. One such effort is trying to bring back the beaver, a rodent species that hasn’t been seen in Greece for about a century.

We know that beavers did exist in Greece, and not only from written evidence. But also thanks to a stuffed animal that was made by French scientists at the end of the 19th century in Messolonghi, in western Greece, and which is now in the University of Athens.

“The restoration of species and depleted ecosystems has been very high on the agenda of Europe in recent years, as traditional methods of protection are not always enough,” explains Theodoros Kominos, from the Laboratory of Zoology and the Faculty of Biology of the Aristotle University.

“So, based on this conversation, we have recommended that beaver restoration be studied in accordance with the recommendations of the International Union for Conservation of Nature (IUCN) and funded by the Beaver Trust UK. This is one of the first attempts to reintroduce an extinct species in Greece. The study, which will be completed by the end of the year, covers three areas: the mouth of the Alyakmonas River, the Rhodope Mountains and the Evros Highlands. We look forward to the arrival of experts from the UK, Norway and Germany, who will help us decide which location will be the most suitable. We are also discussing the creation of a special space in Kastoria where two or three beavers will be kept in captivity to train the locals as well as the general population,” he says.

A sufficient number of beavers will be captured in Germany and brought to Greece, where they are expected to be able to develop into a local population. “The reintroduction of the beaver will be beneficial because it creates an environment that is home to many different species of fish, amphibians and invertebrates. We believe that more than 150 animal species will benefit from its presence here in Greece,” explains Kominos, who coordinates the program with Antonia Galanaki, also from the Zoology Laboratory, under the scientific supervision of Zoology Professor Dionysios Yulatos.

Elusive inhabitants of our caves 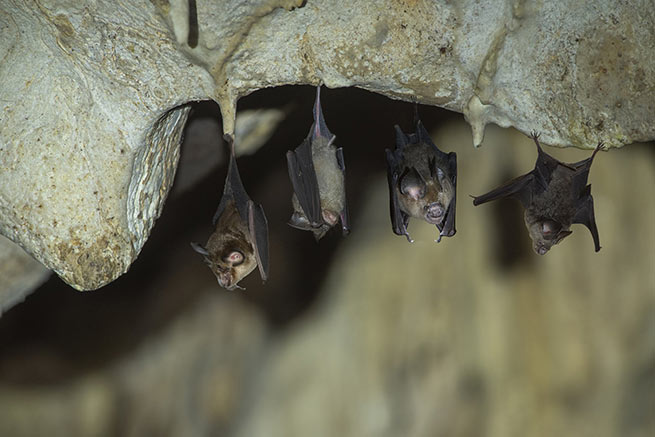 Our knowledge of the biodiversity of Greek caves until a few years ago was limited to two or three caves. However, thanks to the LIFE Grecabat program, we now have information on more than 203 caves and 144 cells (as small caves are called), as well as estimates of thousands of plants and animals, some of which have interesting features.

“Of the 301 recorded species of invertebrates, 260 live exclusively in a pair of neighboring caves. We have caves that have one, two or even as many as eight endemic species, meaning they can only be found in these exact locations. A prime example are the two small caves on Mount Profitis Ilias in Santorini, where we found five endemic species,” explains Calouste Paragamian, Managing Director of the Hellenic Institute of Speleological Research and a member of the LIFE program. “During our test expeditions, we also found some of the largest bat colonies in Europe that we didn’t know about because they weren’t systematically studied,” he adds.

Many novelties were made in the contours of the program for Greece. “Speleologists are equipped with ultrasonic microphones to record the calls of bats, which are then analyzed at the Natural History Museum of Crete. We have created – with minimal resources – 36 recording stations that monitor the air quality inside the caves. This will allow us to estimate how long it will take for conditions to return to normal in caves that host members of the public so that we can establish an appropriate number of visitors. We will also install camera systems in three caves, the most advanced of which will be at Limnes in Kalavryta,” he says of the site known as the Cave of the Lakes at Achaia in the Peloponnese.

Many questions arise because of the need to preserve the biodiversity of the country’s caves, the expert emphasizes. “Now there are 33 caves in Greece that accept paid visitors. With the exception of the caves, which are run by the Ministry of Culture, we know nothing about how many people they take in, how much they earn, and where they end up. The institutional protection of caves is a serious problem, and we are helping the Ministry of Environmental Protection to solve it,” says Paragamyan.

In addition to the Hellenic Institute of Speleological Research, the Natural History Museum of Crete, the ecosystem management firm ATEPE, the Green Foundation and the Ministry of the Environment also participate in the LIFE Grecabat program. 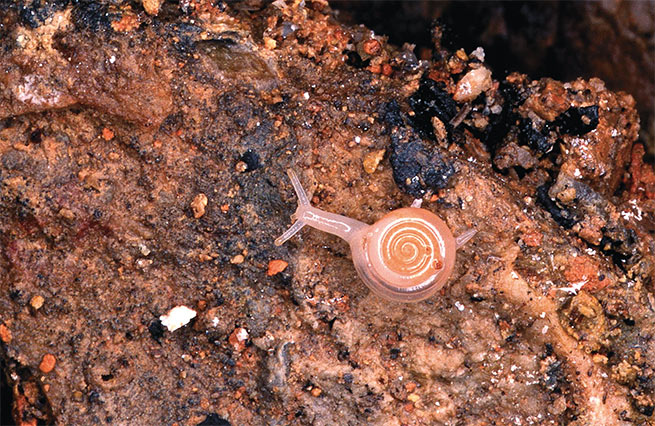 While efforts to study and protect Greece’s biodiversity have become much more systematic in recent years, research agencies and universities still have great difficulty finding the resources they need to fund them. Therefore, the news that Greece was able to receive 100 million euros from the European Union-backed Recovery and Resilience Fund for this specific purpose was very welcome. However, this funding appears to be at risk now because the Environment Ministry has wasted the last eight months and has not even started the process of putting in place initiatives that could benefit.

In November 2020, the ministry commissioned the Environment and Climate Change Agency (NECCA) to prepare a proposal. This was done within the time frame submitted in May 2021 and approved EU in a month. The €100 million offer is for four initiatives:

Indeed, Environment Commissioner Virginijus Sinkevičius welcomed the national biodiversity proposal that was presented to the Recovery and Resilience Foundation during a speech to parliament in Athens last November. The fact is that since the proposal was approved in June 2021, the Ministry of the Environment has done nothing to promote it, which put the proposal at risk of exclusion from the program due to non-compliance with the deadlines.

It would be a serious loss for the country to make real progress on initiatives that could make a meaningful contribution to the protection and conservation of biodiversity, as strongly recommended by the European Green Deal and its 2030 Biodiversity Strategy.