A prosecutor in the trial of the 2018 death of gay rights activist Zach Kostopoulos on Wednesday demanded the acquittal of the police officers and convictions of two businessmen.

In his closing arguments, prosecutor Sotiris Bugiukos pointed to expert reports and testimonies that he said showed malicious intent in the attack by a jewelry store owner and his neighbor, a real estate agency owner, on 33-year-old Kostopoulos when he broke into a jewelry store. store, for “unknown” reasons, being in an excited state, on the morning of September 21, 2018 and, breaking the windows, then tried to escape from it.

The prosecutor alleged that the two elderly businessmen were “acting out of revenge” when they continued to beat and kick the gay activist even as he climbed out through a broken shop window after, according to the owner, tried to rob his jewelry store.

“They wanted to harm him,” he said, recommending that they be found guilty of using lethal physical force. This refers to the moment when Kostopoulos tried to climb out through a broken shop window, and they kicked him, trying to stop him.

Bugiukos added that their actions contributed to the death of Kostopoulos, which, according to the medical examiner, was caused by a heart attack due to extensive cuts and subsequent cardiac arrest due to heart failure.

As for the four police officers accused of using excessive force in an attempt to arrest Kostopoulos, the prosecutor argued that they acted according to the law in an attempt to immobilize a bloody man who was brandishing a large shard of glass while fighting off law enforcement officers. 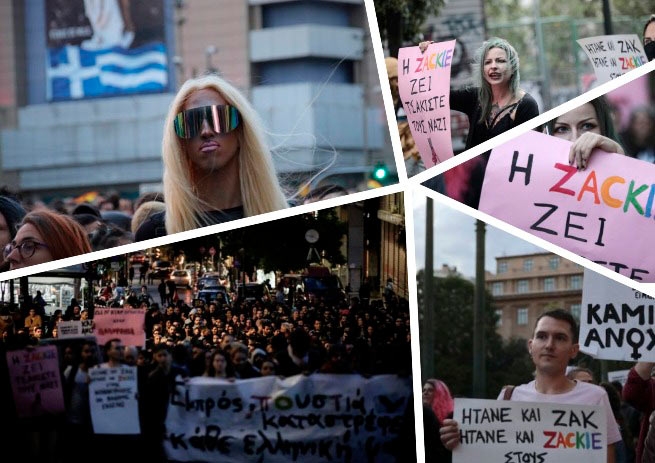 The case of the death of Zach Kostopoulos stirred up the Greek society, which was divided because of the point of view on what was happening.

Part, mainly the liberal public, representatives of NGOs and human rights organizations, as well as anarchists, actively criticized the authorities, demanding harsh punishment for all those responsible for the death of an LGBT activist. Others came out in defense of the police and businessmen.

The investigation itself proceeded with numerous difficulties, especially in the evidence base, when TV channels began to remove videos that showed Zach’s inappropriate behavior. The medical examination took almost 2 months, after which everyone was surprised (or happy) to learn that the person who was listed as a drug addict did not have any banned substances in his blood.

After unprecedented pressure from the media, anarchists (who organized many pogroms) and various NGOs, which were actively supported by the embassies of European and North American countries, the authorities revised their approach to the case and began to consider the guilt of the police and businessmen.

Most likely, the elderly owner of the jewelry store, as well as his neighbor, will receive serious prison sentences for murder, and the police will get by with “fright” and official punishments. And for store owners (and ordinary citizens, when they come to rob them), this will be another reminder that you can’t touch the robbers, suddenly they turn out to be LGBT + activists. However, according to the current laws of Greece, citizens are generally forbidden to resist robbers: if you inflict bodily harm on them, then you can be sentenced to a considerable prison term for this..

PS In light of the latest trends I would add here that dogs that try to bite you or your childrenalso it is forbidden kick or, God forbid, crack on the back with a stick. For this, you risk getting a fine of 30,000 euros + a prison term of up to 10 years.