The death of the Greek climber Antonis Sikaris in the Himalayas caused a shock. The great Greek climber announced on his Facebook page that he had reached the summit on Monday. However, he died on the way down.

Antonis Sikaris in his last message said that he “dedicates the conquest of this peak to two Greek climbers who died in the Himalayas in 1998, Nikos Papandreou and Babis Tsupras.”

Who were Nikos Papandreou and Babis Tsupras?

Nikos Papandreou died on May 1, 1998 in the Himalayas. The NEA newspaper then wrote about this: “The tragic death on May 1 in the heights of the Himalayas of the mountaineer of the Hellenic Mountaineering Association (SEO) Nikos Papandreou, father of two children, from Agios Anargyros.

The 44-year-old experienced climber, along with two other members of the Greek climbing team of seven, was at an altitude of 7500 meters when a strong gust of wind literally dragged him into the abyss. The climber fell off a cliff 1500 meters high. Despite the mobilization of Greek climbers and Nepal rescuers, the unfortunate Nikos Papandreou could not be found.

“Although a helicopter was used to search for the Greek climber, it was impossible to find him,” the media wrote. The tragic irony is that the head of the mission at the time was Antonis Sikaris. “It was a fatal set of circumstances,” Antonis Sikaris told NEA at the time in Kathmandu.

Babis Tsupras died in October 1998 at the age of 36, shortly after conquering the coveted peak of Daulagiri, like Antonis Sikaris.

NEA wrote at the time: “The 36-year-old climber reached the summit of 8167 meters at four o’clock in the afternoon. After a while he began to descend. But a sudden snowstorm overtook him, the traces disappeared. When time passed, and the athlete never returned, the rest of the Greeks organized a rescue operation, together with Italian and Spanish climbers, and went in search of him.

However, at an altitude of 7900 meters, they were forced to abandon their efforts and return due to avalanches, unable to find traces of the unfortunate climber. NEA then added: “Last spring, at an altitude of 7000 m, Nikos Papandreou died after falling into a ravine. At that fateful moment, Tsupras was next to him. 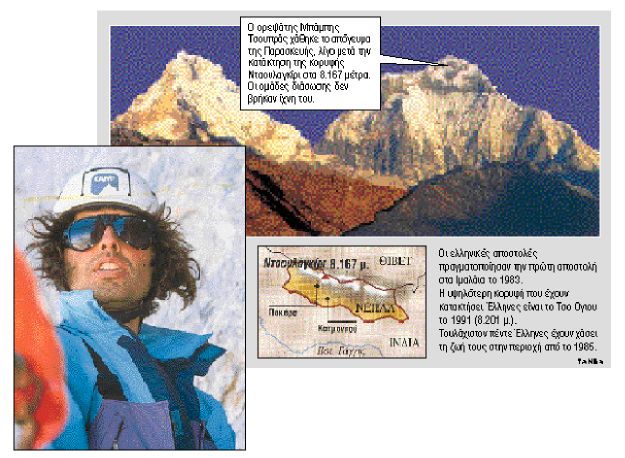