From the first days of the confrontation between Ukraine and Russia*, hundreds of thousands (if not millions) of new fighters have joined the information war on the Internet that began in 2014, which brought it to a new, global level.

Above the fakes are messages – clear and understandable messages. They are like rockets, they are fired at a specific target. Messages can be truthful, manipulative, or completely false. This is their danger, because if everything is unambiguous with a fake, then it is not with the message. It consists of fakes, that is, the parties to the conflict use fakes, half-truths and manipulations to fill the message, to shape it. There are far fewer of them than fakes, because it takes resources to form and promote a message.

Messages there may be several, sometimes they even contradict each other. For example, since the beginning of a full-scale invasion, Russian propaganda has been spreading the following messages: “Ukraine was preparing to attack the LDNR”, “Ukraine was preparing to attack Crimea.” At the same time, Russia constantly repeats the message about the “weakness of the Ukrainian army”, and Ukraine that “we have already defeated Russia”, “Russia lost the war”, “Russia has run out of missiles (soldiers)”, etc.

In healthy strategic communication, messages should not contradict each other. Since often the task for the parties of the information war is the ability to puzzle the audience, to confuse it so much that its coordinate system is completely lost. That is, the parties to the war do not necessarily want to force the opponents to believe in something, on the contrary, very often they try to undermine the trust in their own authorities or the media and say that no one can be trusted.

The assembly of messages is combined into a narrative. A kind of story, a story that explains the world around. The task of narratives – form a certain worldview. It is he who is strategically important, because the messages can be modified, and the narrative is the story. It takes time and resources to create a quality narrative.

Narratives just realize such causal transitions, which allow to streamline the chaos of the surrounding world. It is important for a person to see the logic of what is happening, because then the world will no longer seem so scary to him. Let’s add here the fact that both propagandists and their leaders themselves begin to believe in this logic, because otherwise their minds will “break” cognitive dissonance.

Russia’s most popular narrative regarding Ukraine is the assertion of a “under-state.” The messages that fill this narrative are about history, corruption, culture, economics, and so on. That is, anything that can be used to confirm the narrative.

Another central narrative is the allegation of “Ukrainian Nazis”. It is this worldview that Russia uses as one of the grounds for a full-scale invasion of Ukraine. Moreover, to feed this narrative, the Kremlin continues to talk about the denazification of Ukraine as one of the requirements of peace agreements. This narrative is also filled with various messages concerning both Ukrainian history and the present, in particular: “Nazis are in power in Ukraine”, “Ukraine forgot about the victory over Nazism”, “SS division are Hitler’s collaborators”.

The main narrative of the Kremlin: “Ukraine is bad because the West is operating there, which is a natural enemy for Russia.” By tying Ukraine to a negative principle, any consequences can be drawn from this.

Narratives are supported by thematic communication framesthat associate an opinion or impression with a specific object or subject. Russia’s view of Ukraine is held by the following frames:

These structural units permeate the entire Russian discourse about Ukraine. This is the same conditional “dictionary” in the language of which one can describe Ukraine. Any way out of this language is almost impossible. Before us is a kind of map of the world, and what is missing on such a map cannot become a subject of conversation. 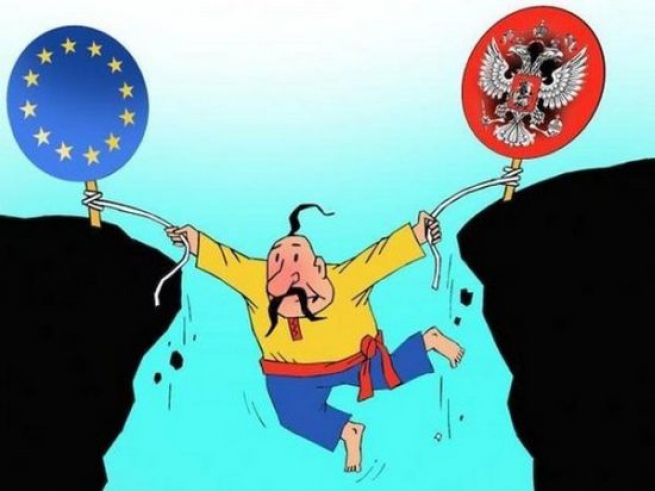 In turn, in the list of the most common narratives by Ukrainian propaganda is, oddly enough, the belief that “when Kyiv was a mighty city, there was a swamp in place of Moscow”and, as its continuation, the requirement call Russians mokshasby the self-name of the tribe that lived on the site of modern Moscow.

Since the beginning of the war, perhaps the main narrative of the Ukrainian side has been “Freedom or Death”, or the war to the “last Ukrainian”. “Putin is crazy dwarfwho sits in a bunker in the Urals and wants to destroy the whole world. This narrative is used both as a whole and in parts. (It is noteworthy that the humiliation of height dates back to the time of Napoleon, whom the British also called a dwarf, although he, like Putin, was 170 cm tall, which at that time was above the average for men).

Of the latter: “The whole world is with us”, “Russia lost the war”, “The West crushed Russia economically and politically”, “There is no Nazism and Russophobia in Ukraine”, “The Azov Regiment are elite patriotic fighters who have nothing to do with Nazism”, “Putin wants to take Ukraine out of greed.” 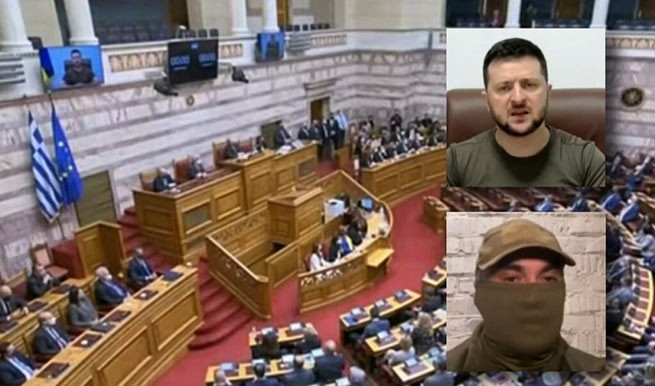 Became scandalous performance V. Zelensky in the Greek Parliament, together with the fighters of Azov, where he repeated the slogan of the Greek revolution: “Freedom or death.”

Other popular narratives highlight the bravery of Ukrainians, such as: viral images of a Ukrainian woman confronting a Russian soldier; old photographs of people praying outdoors or couples hugging under Ukrainian and Russian flags to highlight Ukrainians’ desire for peace.

A more recent (and dangerous) narrative emerging from the depths of the 74th Psychic Information Operations Center (or their Western counterparts) is that “Russia does not spare the civilian population of Ukraine, and mass atrocious crimes against them confirm this.” By the way, this model had staged so-called Buchan massacre.

One of original methodsnoticed by the author of the publication. Submitting materials on how to correctly distinguish fakes, the authors of publications introduce the narrative that Ukrainians are very smart, which means they are good at distinguishing truth from fakes. After praise (the Carnegie method), the consumer of the narrative is convinced that all information from the specified Ukrainian sources is obviously true, and all information from Russian ones is unequivocally fake.

It is noteworthy that Ukraine, in the likeness of NATO countries, has long created and is actively using a specialized military unit as part of its armed forces – the 72nd Center for Information and Psychological Operations, which has been the main supplier of fakes about the military campaign since its inception. In Russia, the situation is different, the main burden of the information war fell on the shoulders of absolutely civilian structures, which, due to the lack of coordination and interaction with the Russian Defense Ministry, leads to the existing results.

So, there is a narrative consisting of messages that feed on fakes, manipulations and speculations. Here is such a pyramid of information warfare.

You can be able to easily identify fakes, but at the same time succumb to certain messages of disinformation or believe in a narrative. It is also important to remember that information and psychological influence is always carried out with the aim of changing behavior. That is, each fake, provocation or speculation, in its entirety, should push for action. For example, to vote for a particular party in the elections, to go out or not to go out to protest.

There are many tools in the arsenal of the propaganda machine: from active local events to social media bots. That is, the tools can be different, but the meanings of informational influence are always built on the principle: “narrative – messages – fakes, manipulations, speculations”.

Understanding this on a personal level, firstly, encourages you to comprehend the information around you. So when we talk about critical thinking, we constantly encourage people to ask questions. When you see a fake or manipulation, try to climb up the pyramid, that is, think about what message and narrative fills this fake. Moreover, think – for what, that is, what action or behavior should be the result of such informational influence. And then, at least, try to disappoint the author of the fake – not to do what he hopes to get from you.